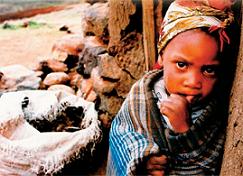 Bernardo Kliksberg reflects on the obscenely unequal distribution of wealth in the global system. Calling upon the examples of Wesley Autrey and Los Hijos de Don Quijote, Kliksberg illustrates the need for socially responsible societies that look after those who cannot look after themselves. From the unethical role of agricultural subsidies, to the lack of access to clean drinking water, sanitary facilities, housing, health care, and employment, Kliksberg points out the gross inequalities in the world, the need to find solutions, and the role of social responsibility in reducing poverty.

WESLEY AUTREY IS A NAME TO REMEBER. This humble construction worker from the United States was waiting for a subway train in New York City with his two daughters of 4 and 6 when he saw a young man fall into an epileptic seizure. Shaking uncontrollably, the young man fell into the tracks, just as the train was arriving. Without hesitating, Autrey jumped down after him and held him down, out of danger, while the subway train passed over them. The mayor of New York honored Autrey with the highest medal of distinction the city can offer. His message: take responsibility for one another. Autrey, in many respects, is a modern day Biblical hero.

The 21st century desperately needs this kind of social responsibility. In the words of Kofi Annan: without solidarity, no society can be stable. It is unrealistic to believe that a society can function with some people reaping huge benefits from globalization, while others are thrust into abject poverty. Yet, that is exactly what is happening now. The rich countries spend 84 billion dollars a year in subsidies to their farmers. The European Union spends 30 dollars per sheep a year. Yet only 26 dollars a year are spent on helping the more than 3 billion impoverished people of the world. We treat our sheep better than people. On the same token, subsidizing our farmers impedes the developing countries from selling their own products.

[1]THE SONS OF DON QUIJOTE
The global distribution of wealth is almost obscene. According to the University of the United Nations, 64 million people control more than 90 percent of the world’s riches: 40 times more than 3.25 billion.

These and many other asymmetries have created a world of people condemned to the earth. People without clean drinking water, sanitary facilities, homes, basic health care or jobs abound throughout the entire developing world. But there exist imbalances in the developed countries as well. In France, the call to fight for social responsibility is strong.

One NGO in particular, Los Hijos de Don Quijote (the Sons of Don Quijote), has called for the public to spend some time with the homeless and see what it is like to live as they do in tents. The NGO denounced the fact that 3,207,500 people live in alleys, streets, and run-down hotels (there are 744,000 homeless people in the U.S). The public reaction was powerful. Thousands went to live among the homeless in camping tents. Under the pressure, government announced that it would begin to uphold the universal right to shelter. The State promised to guarantee that every citizen have access to this minimal right.

[2]URGENT RESPONSIBILITY
Various states in the U.S are adopting a similar attitude about health care by adopting universal health insurance. In Latin America, more and more people are falling victim to poverty and extremely high levels of inequity every day. The number of homeless reaches the millions. 40 percent of the elderly have no insurance whatsoever. And while Canada spends 2,989 dollars a year on health care per person, in Guatemala only 235 dollars is spent a year, in Peru only 233, in Ecuador 220, in Nicaragua 208 and in Honduras only 184 dollars a year.

The consequences of these disparities are not abstract. The infant mortality rate for the richest 20 percent of Nicaraguans is 16 deaths out of ever thousand births. For the poorest 20 percent of the population, it is 50 for every thousand.

Latin America and the entire world are in urgent need of a society based upon social responsibility. Those who can feed themselves need to take responsibility for those who cannot. Autrey and Los Hijos de Don Quijote have made for great examples.