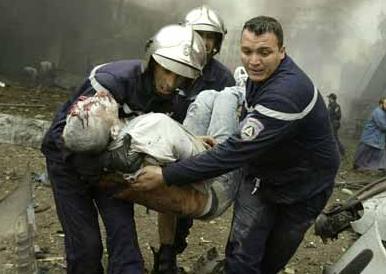 Javier Jordán analyzes the implications of the terrorist attacks that rocked Algeria and Morocco over the last few days. Through its transformation into a member of the larger Al Qaeda network, the Salafist Group for Preaching and Combat has intensified its Jihadist activity in the Maghreb, and revitalized its organization. In Jordán‘s opinion, this new threat could greatly destabilize the governments of the Maghreb region, and pose a serious danger to Spain and the European countries of the Mediterranean.

WHAT IS HAPPENING IN THE MAGHREB? After several atrocious bombings in Algeria, and the police operation in Casablanca that ended in the deaths of a police officer and four suicide bombers, it is clear that a renewed threat has reared its head in the region.

And that threat has a name: Al Qaeda of the Maghreb, formerly known as the Salafist Group for Preaching and Combat (SGPC).

CHANGE OF NAME AND STRATEGY
Like other second-generation Jihadist organizations, the Salafist Group for Preaching and Combat suffered a severe setback over the past few years. As the War on Terror intensified throughout the world, dozens of its leaders and militants were hunted, killed, and jailed.
In the face of widespread anti-terrorism operations, the SGPC has proven extraordinarily resilient. Yet, the future of establishing a radical Salafist state and toppling the current regime in Algeria has grown less and less likely. As a consequence, the SGPC has taken action to revitalize their organization, and renew their dedication to their fundamentalist Holy War.

INTEGRATING THEIR ORGANIZATION INTO AL QAEDA
After years of discussion, the Salafist Group for Preaching and Combat has become a formal member of the international network of Al Qaeda. On September 11, 2006, Ayman Al-Zawahiri announced the formal incorporation of the SGPC into Al Qaeda and four months later, Abu Musab Adbel Wadoud, the SGPC’s leader, announced the change of the organization’s name to Al Qaeda of the Maghreb. Saudi Arabia, Iraq, the Sinai Peninsula, Afghanistan, and now Algeria all have active Al Qaeda terrorist groups operating within their borders.

In the past years the two Groups (Moroccan and Libyan) have suffered from the widespread death, detention and defection of many of their militants. The newly formed Al Qaeda of the Maghreb is attempting to salvage the remains of the Holy Jihad by uniting all Jihadist groups under one banner.

GLOBALIZING THEIR POLITICAL AGENDA
The objective of the new group is not only to establish a radical Salafist regime in Algeria, but to spread the caliphate throughout all of Northern Africa. In the months before the name change, the SGPC also intensified its threats against Western targets, mainly the United States, France, and NATO.

Al Qaeda of the Maghreb is offering arms and explosive training to its volunteers. This past February, in Reus, Tarragona, the Spanish police detained Mbark El Jaafari, a Moroccan accused of having participated in the recruitment of more than thirty Jihadists willing to head to Iraq. All thirty had been trained in North Africa. The organization runs training camps in Sahel, a large piece of land in the South Sahara.

EMPHASIZING PROPOGANDA
Al Qaeda in Maghreb has also created a Department of Communications to coordinate media activities including recordings of attacks, email distribution lists, a continually active website with official announcements, information on operations, and video and audio archives. Through this propaganda campaign the organization is trying to transmit an image of strength and internationality. Their propaganda offers a global vision of the Jihad, without focusing exclusively on Algeria. News from the Czech Republic to Iraq is all included, as well as reports on non-Algerian militants within the organization. In this way, Al Qaeda of the Maghreb can amplify its pool of potential sympathizers, incorporating Muslims of all nationalities.

IMPLICATIONS FOR THE MAGHREB AND EUROPE
The transformation of the SGPC into Al Qaeda of the Maghreb means bad news for the peace and security of the Mediterranean.

The principle consequences are analyzed below:

The existence of an organization capable of creating and spreading propaganda, intensifying recruitment, and executing terrorist attacks, suggests an inevitable rise in said actions. As the technological prowess of Al Qaeda in the Maghreb continues to progress, their ability to coordinate operatives throughout all of Northern Africa will become even more lethal.

INCREASING TERRORIST PROFICIENCY
The SGPC is an experienced group. But up until now, one of its principle vulnerabilities has always resided in its lack of technical preparation. By incorporating itself into Al Qaeda of the Maghreb, the SGPC has eliminated this vulnerability.

Al Qaeda’s technical abilities are far greater advanced than anything the SGPC has experienced up to date. Al Qaeda uses suicide belts consisting of 2 kilograms of explosives to be set off in case a Jihadist is captured. The belt requires sophisticated security mechanisms, which SGPC has lacked until now, to ensure that it would not go off accidentally. The attacks on April 10th and May 11th employed more powerful explosives (like the ones used in Casablanca in May of 2003 and London in June of 2005) and serve as evidence that Al Qaeda is aiding the SGPC to enhance its killing potential.

POLITICAL CONSEQUENCES FOR THE MAGHREB REGIMES
Al Qaeda of the Maghreb is not sufficiently armed, nor popular enough to overthrow the Maghreb regimes. Yet, the rise of Jihadist terrorism in the region could put the slow political liberalization processes in jeopardy of collapse.

The rise in Jihadist activities in Algeria, put a halt to the plan for national unity proposed by President Buteflika. Buteflika gave amnesty to 2,629 Jihadists between the spring and fall of 2006. According to the independent media and the SGPC, some of those given amnesty have again united with the terrorist organization. At the same time, the rebirth of Jihadist activity in Morocco could negatively affect the political liberalization of the country. The foremost danger is that Islamists in the Justice and Development Party achieve victory in the legislative elections set for later this year.

GROWING THREAT AGAINST EUROPE AND SPAIN
The birth of Al Qaeda of the Maghreb has also begun to cause panic in the European Union, particularly in France, the UK, the Netherlands, Italy, and Spain. Over the last few years Moroccan terrorist cells have risen and grown in all of the aforementioned countries. Fortunately the majority of these cells (excluding the planners of the March 11th bombing in Madrid, and those responsible for the assassination of filmmaker Theo Van Gogh) have been neutralized before they could carry out their attacks.

The threat against Europe is growing and must be taken seriously. The new Jihadist organization has adopted a much more aggressive rhetoric against Western countries, and is credited with having planned successful attacks against foreign objectives in Tunisia, Algeria, and Morocco.

Therefore, the short term danger is that the terrorists carry out bombings on the northern coast of the Mediterranean. And the danger is real. The Maghreb Jihadists are improving their logistic and armed capacities on both sides of the sea. And their connection to Al Qaeda is only one more reason to expect terrorist attacks in the European Union. Since September 11th, 2001, Al Qaeda has ceaselessly attempted to carry out letal bombings in Europe. With the incoporation of the SGPC into their network, they will have a greater likelihood of success.

Ayman al-Zawahiri’s call to liberate the occupied territories of Ceuta and Melilla, in a public communication in December of 2006, constitutes a serious danger for our country. The same can be said about the mention of recovering Al-Andalus, in Al Qaeda of the Maghreb’s message following the bombings of April 11th.

Lastly, it is important to consider the indirect consequences of the eventual withdrawal of US troops from Iraq. Until now, the SGPC has contributed to the recruitment of hundreds of volunteers to perform terrorist acts in Iraq. Some sources claim that 20% of Iraqi suicide bombers come from Northern African training camps. If the conflict in Iraq becomes an exclusively civil war, rather than a fight against US occupation, the country will lose its appeal for volunteers. Europe will serve as the obvious next target, and in the worst of all scenarios, so will Spain, for the liberaiton of Ceuta, Melilla, and the rest of Al-Andalus.