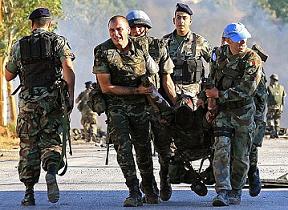 Although the terrorist group Fatah Al Islam (Sunni) is in a consolidation stage, they still are far from replacing the Al Qaeda mark in Lebanon: this situation should be taken advantage of in order to neutralize their Yihadista’s aspirations before it is too late.

[1]
THE FOLLOWERS OF THE ISLAMIST FORUMS on the Internet are witnesses to the appearance of a new integration of the large constellation of Jihadist groups in November of 2006. A new entity located in Lebanon, called Fatah al-Islam, proclaimed their existence through a brief communiqué.

Their ideology: the Sunni origin of their members, the Jihadist salafism and the admiration for the ideological principles and established strategies for the terrorist organization Al Qaeda.

AL QAEDA AND HEZBOLLAH, TOGETHER BUT NOT A MESS
The public appearance of this dark organization was the logical consequence of a hot debate that has been going on in cyberspace during the summer. The end of the military intervention of Israel in Lebanon was given as if the dedication resulted from Hezbollah’s Shia Islam, like the last Muslim force capable of challenging the credible manner of Israel. The sheik, Hasan Nasralá, and his militia have been capable of triumph there, where all of the Arab states from the zone have been a spectacular failure, which strengthened their charisma to unimaginable extremes and their predicament between the public opinion of the Middle East.

These months have been a chaotic scenario for the Sunni religious radicalists. Profoundly anti-Shia Islam, not only was developing the annihilation of this religious group in Iraq, but now that their ideologies have left, it is clear that the collaboration with Hezbollah was prohibited, in spite of the fact that this militia was fighting a common enemy.

Before the eyes of Al Qaeda, the Shia Islam is a heretical sect; therefore, their treatment should be so harsh so that they receive other enemies of Islam. But on the other hand, the strategies of the terrorist organization contemplate with an enormous distrust in every movement of that militia, to consider it a mere extension of the pretences of Iran to turn into the hegemonic power in the region, and to exercise a charismatic leadership over all the Muslim orb. By making a setting that puts the Jihadist aspiration in danger of establishing a political-religious force in the form of a Caliphate Islam in the lower zone.

THE APPROPRIATION OF THE PALESTIAN CAUSE
These arguments do not avoid the spread of discouragement and the powerlessness between the followers of the global Jihad: why has Al Qaeda not been fighting its enemy Zionism in Lebanon? The war between Israel and Hezbollah created new evidence of the vulnerability principles of the terrorist movement of Bin Laden: their inability in order to have the protagonist role in the direct fight against Israel.

In fact, they have not ruled out the radical priests that have criticized the appropriation of the Palestinian cause for part of this terrorist group. The oppression of the Palestinian village and the call to combat the Jews has been a constant within the public alquedians’ speech; however, the group difficulty has been to support their action ideology. Although their discourse emphasizes the idea to attack the United States and their favourable western allies and favours the Palestinian cause, Bin Laden’s group has not been able to enjoy the legitimacy and the popular support that the Arab’s give to other organizations of priority in the harassing and terrorist violence against the Jewish state.

Among these voices, conscious of the necessity of silence, is the number two of Al Qaeda, Ayman Al Zawahiri, who sent out a communiqué urging the formation of a Jihadist front in Palestine and Lebanon, suggesting that the geographic proximity of their brothers of Iraq would be able to establish a fruitful collaboration between the different groups of Muyahidines.

THE DEBUT OF FATAH AL ISLAM
What happened in this last year is, predictably, the result of that transfer towards Lebanon’s resources, knowledge and terrorist experiences. At the time that this new organization was going to build their ability to carry out terrorist operations, they were developing a notable communicative activity in some of the principle Jihadists websites, those that were permitted received an authentic wave of international Islamic solidarity, when the Lebanese Government decided to act against the group, besieging the base of operations in the countryside of refugees of Nahr al-Bared.

Although the investigations in course should still determine the exact authorship, all seem to point to the launching (still not claiming responsibility for) of three rockets against Israel territory around the middle of June, and the most recent attack with a car bomb against Spanish troops of the United Nations, which have been supposed as the terrorist debut of this group.

Both attacks implicate a level of preparation and technical skill, unsuitable for a group with only one year of existence; which reinforces the hypothesis of a strong collaboration between Fatah al Islam and other Jihad groups already united. Results are not likely; an obscure organization without any type of background, with the ability to provide the capacity (like the attacks at a distance and the fabrication of car bombs) only to advance as the elite of worldwide terrorism.

THE REPUTATION OF THE MARK OF AL QAEDA
This conviction should not lead us to assume that Al Qaeda is the one directly responsible for these actions. In fact, they have not ruled out the communication media that has assumed with total indiscretion that Bin Laden has converted into a new actor of the complex Lebanese puzzle. If all is certain that the leaders of Al Qaeda have resulted successfully in their company to instigate the formation of a Jihad front in Lebanon, which should not lead to the assumption that Fatah al Islam is a mere extension of this terrorist net.

The Al Qaeda mark has converted into a distinctive valuable, which not all the Jihad groups can utilize like an emblem. Different groups, such as that founded by Abu Musab Al Zarqawi in Irak and the Salafism Group for the preaching and the battle in Algeria, have had to face endless negotiation processes until able to obtain the final approbation of Bin Laden, which permitted them to utilize the denominations of Al Qaeda in the land of the two rivers and Al Qaeda in the Islamic Magreb.

The organization of Bin Laden needs to make sure that the groups adopt his name, fully share with his strategic vision and do not carry out determined actions that could damage the reputation of the organization. For example, the organization of Zarqawi had to abandon their tactic of shooting video of their brutal decapitations of hostages, due to the criticism received by Al Qaeda considering that those practices generated contradictions in their support base.

BELONGING HAS ITS PRIVLEDGES
The decision to formally join forces with Al Qaeda is not an easy step for any group. On one hand, demanding a raised level of ideological and operational deference towards new leadership of the organization, at the same time that the group changes in a priority enemy for the international coalition of countries that combat terrorism. However, the benefits are considerable: enjoying the maximum level of prestige and acknowledgement within the Jihadist community, which provides the enormous obtaining of collaboration and the inflow of donations. To which should add up the repercussions and the privileged access that the messages of the group will have between the middle of global communication.

Fatah Al Islam is still in a phase of organizational consolidation, which not only makes it vulnerable to the operations of decapitation, but it also locates it still very far from being able to aspire to a franchise with Al Qaeda. This circumstance should be taken advantage of by the Lebanese government and the international community in order to neutralize the group, before it is able to maintain attacks against Israeli and Western targets, which will reinforce enormously their position among the radical community. In this opinion, it is beginning to be clear that the large shade of Al Qaeda spreads over the land of the cedars, at a time to avoid Bin Laden’s group from leaving their footprint on Lebanese land.