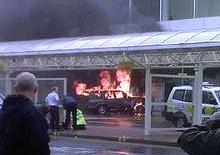 British Muslims have been cast into the spotlight with the recent terrorist attacks in Britain. It is clear that engaging with them will play an important role in the preventing Islamic extremists.

[1]
THESE ARE DIFFICULT TIMES FOR BRITISH MUSLIMS. The involvement of radicalised members of their communities in terrorist activities against the UK over the last years has put them in the spotlight, casting doubts on their allegiance and, relatedly, on the merits of Britain’s traditional multicultural model.

It is no wonder then that several Muslim representatives expressed some relief when the recently bungled terrorist attacks in London and in Glasgow airport thus far appeared to involve mainly foreigners from countries such as Iraq or India, that is, outsiders –to be sure, the puzzle now is that the suspects are largely degree– holding professionals working for the national health services.

MULTICULTURALIST POLICIES
The threat of home-grown Islamic terrorism came at a time when Britain started undergoing a process of reassessment of its policies toward minorities. Social tension embodied in a series of violent riots of complex roots, such as those which broke out in Bradford and other cities in Northern England in the summer of 2001, sparked concerns about the consequences of ethnic and religious segregation perceived to be taking hold in some places.

The Report on Community Cohesion –the so-called Cantle Report— which examined the causes of the riots, warned against the pervasive nature of separate social and cultural arrangements which led to parallel lives among people of different ethnic background. Trevor Phillips, Chairman of the Commission for Racial Equality, a race discrimination watchdog, stirred up controversy with his critiques of the multiculturalist policies in place since the 1960’s. In his view, these policies formally fostered respect for diversity while de facto leaving discrimination and inequality unaffected. Furthermore, Britain, he argued, was sleepwalking to segregation. Policymakers therefore have been since stressing the need to push for common values, a sort of quest of what being British means.

THE LINK TO ISLAMIC TERRORISM
The fact is that this debate has become linked to the issue of Islamic terrorism particularly after 4 British citizens mostly of South-Asian descent blew themselves up in the London transport network on July 7, 2005, killing 52. Shortly afterwards, on the 21st, African immigrants with British passport unsuccessfully tried to commit another suicide bombing –the verdicts for conspiracy to murder against four of the defendants were returned Monday. Other conspiracies have also been foiled, such as the plot to blow transatlantic aircrafts last August 2006, but the threat remains.

As a response to international terrorism, the United Kingdom has enacted since 9/11 a strong body of legislation vesting the Executive with overwhelming powers of surveillance, detention of suspects, deportation, prosecution and so forth. This legislation is but a part of a long-term oriented Government strategy to tackle international terrorism known as CONTEST, made public in 2006 and which has four strands: Prevent the radicalisation of individuals, Pursue terrorists and those that sponsor them, Protect the public and Prepare for the consequences. This strategy is comprehensive and interestingly comprises not only tough enforcement measures such as the ones mentioned, but also emphasizes the importance of engaging with the Muslim population and recognizes their relevant role in preventing extremism in their midst.

A POTENTIAL STRATEGY
The strategy, as I will explain in a second part of this analysis, is potentially sound and balanced. However, the danger for the British government is to cave in to tabloid pressure and fear-mongerers –in a nutshell, to populism–, applying measures of doubtful effectiveness and democratic quality in an effort to assuage understandable fears of the public, while alienating its Muslims citizens. Unfortunately, that has seemed too often to be the case under Tony Blair and it remains to be seen how current Prime Minister Gordon Brown will deal with this issue.