contributes to the missions of multilateral peace, humanitarian aid, and recons 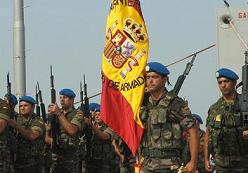 truction that was proposed by the Government and passed by the Congress which represents the Spanish citizenry. The country is already a power on the global stage, and for this reason it neither can nor should elude its responsibilities.

CONCEPT OF AN OBLIGATION to protect is not a new one, but the ex-Secretary General of the United Nations, Kofi Annan, brought this concept up to date during his special mandate, that it is valuable to defend human rights for all, and that all participate in protecting them. In a world where information is instantaneous, where we know exactly where, how, and why human suffering is occurring, it is impossible to remain indifferent.

If human rights are universal and inalienable there is no excuse for not going to aid those who suffer threats to their lives, to their dignity, to their liberty, or simply limiting the development to the utmost of their capacities.

is already a power of great political and economic influence at the global level, and for this reason it neither is able to, nor should it elude its responsibilities, in the defense of the rights and liberties in all of its international relations, bilaterally, regionally, or multilaterally. To this end it contributes through means of classical diplomacy, parliamentary or publicly, furthermore with objectives and clear values which when added together, constitute an effective cooperation towards world peace. One of the most potent mediums for the prevention of conflicts is the Alliance of Civilizations, a concept that has been developed to become a key tool of diplomacy, indispensable in promoting peace and security in the world.

Equally, contributes to missions of peace multilaterally, humanitarian aid, and the reconstruction that has been proposed by the Central Government and passed in Congress in representation of the Spanish citizenry. It is evident that missions of maintaining peace imply risk, as they take place in unstable post-war areas, with the risk of being attacked, and for this reason the majority of those involved are compounded with military forces, as well as with police forces and other agents necessary for the reconstruction of a country.

The right to life implies the prevention of wars, of terrorism, of extreme poverty, and of the death penalty.

The mediums available are dialogue, diplomacy, and the use dissuasive economic or military sanctions when no better alternative exists. In this consists the obligation to protect as defined by ex-secretary general of the United Nations, Kofi Annan, which is simultaneously a moral obligation as well as a necessary action in order to preserve world peace.