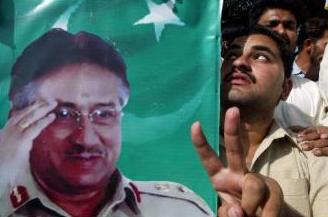 The author examines the democratic transition in and the hopeful transition to civilian rule in the upcoming general elections in January 2008.

AS EXPECTED, GENERAL MUSHARRAF won the October 6th elections for presidential office of . The Electoral College of the presidential elections is made up of the parliament and four provincial assemblies, consisting of approximately 700 electors. Earlier, the members of the newly established All Parties Democratic Movement (APDM) had resigned from their parliamentary seats and provincial seats. Also, the lawyers’ community had taken the initiative and put retired Justice Wajihuddin as a candidate for the presidential office. He was seemingly an upright and sensible man, and a large number of educated Pakistanis had supported him on a matter of principle. Wajihuddin had appeared to many people as the conscience of the nation and the symbol of the aspirations of the general public.

The President Musharraf has promised to resign from his Army Chief position sometime in the next three weeks. Most probably, it will happen slightly before the deadline of November 15th. If this transpires it will be a positive indicator that the transition to civilian rule has been accomplished. We can only hope that the development will actually occur.

Rather surprisingly, the Supreme Court had allowed Musharraf to contest the upcoming presidential elections as army chief. Naturally this caused dismay among the opponents of military rule in .

As expected, since the Supreme Court verdict on September 28th, 2007, public protests have initiated. Unsurprisingly, the lawyers had started to protest and the political parties joined in the fray. They continue to voice their protests against the election of General Musharraf.

What can we expect now that the presidential elections have taken place and General Musharraf is legally president of for another five years?

Musharraf has been the strongman of since the October 1999 coup, and the facade of democracy is now running thin. Musharraf’s supporters are jubilant about his re-election as president. The official results of these elections have been delayed because the Supreme Court is still considering the legal issue of General Musharraf’s presidential bid. It seems that the Supreme Court will go ahead and put its stamp of legality on the recently held presidential elections. By this action, the Supreme Court will be taking a political stance in favor of a planned transition to democracy in the country. Not bad considering that the alternative would have caused a serious crisis of unimaginable proportions. No one is ready to take power from Musharraf at this point in time.

“The military government does not officially recognize more than twenty deaths, but the figures of Burmese organizations speak of hundreds”

The Supreme Court is very conservative and has a history of being pliant towards the military. Most importantly, getting rid of military rule in is a political issue and not a legal one. Therefore, the Supreme Court will, most probably, take a back seat to the problem of military rule in . In other words, the Supreme Court cannot be expected to de-rail the transition process. It is expected that this transition will be completed when Benazir Bhutto returns to next week after eight years in exile, general elections are held, and finally the Pakistan Peoples Party, headed by Benazir Bhutto, wins the elections and comes to power. At least, this is the game plan of General Musharraf. Will this be good for the country? In reality, a civilian government, although weak and lacking good leadership, is still preferable to military rule. At least, you can throw out the civilian rascals, so to speak. The military does not go out easily. That much is a known.

However, to perceive that Pakistanis are condoning military rule is far from the truth. The military has no right to rule any country. The military has created this governance mess in the country. But it was not just the Musharraf regime but all successive military regimes that have ruled starting from: Ayub Khan, General Yahya Khan, and General Zia ul Haq.

Bear in mind that military rule has dominated throughout the sixty years of ’s independence. The military is responsible for the thwarted development of democratic norms in the country and the Supreme Court of Pakistan has supported military rule. This aspect of ’s politics is most tragic, to say the least. The Supreme Court was designed to uphold the principle of constitutional rule and the rule of law; as opposed to the principle of rule of the gun. Apparently, the Supreme Court feels too cowed by the military’s power, and more importantly, by the looming crisis that would have overtaken if this transition of sorts was thwarted by the bench.

Also, the Pakistanis were expecting too much from the Supreme Court. The Supreme Court itself has been brought down to earth from the earlier public acclaim of the apex court. Politics is a deadly serious business. The fact that the military regime in power does not want to surrender power was to be expected. Nonetheless, the political parties, civil society, and the media have a historic role to play to confront the military. This is not going to be easy by any standards. We hope and pray that General Musharraf will indeed resign as Army chief very soon. Since the military has no business in ruling the country, it must depart the corridors of power very soon.

US AND TRANSITIONAL SUPPORT: ARE THEY DOING ENOUGH?

The transition to civilian rule is problematic in . The military-dominated establishment is very well entrenched and has ample resources at its command. The opposition to Musharraf is also discredited. It is too weak and disunited to take on the military-dominated establishment. The key is to have a fair and free general election in this coming January. A rigged election, as what happened in the last general elections in 2002, will prove disastrous to the country. Therefore, the upcoming elections will have to be on a level playing field. This means that Nawaz Sharif and Altaf Hussain must also be welcomed back to . This is needed to ensure credible elections. A sham election will also usher the country into yet another crisis. In the meantime, we can only hope and pray.

“A carefully planned transition, yet be achieved, may be beneficial to as well as its Western benefactors. Democracy in will take time to establish itself”Tension is in the air, and if and when, a transition to civilian rule actually happens, as promised by Musharraf, then this might turn out for the better. After all, expecting the military to go back to the barracks is really expecting too much. Politics is the art of the feasible, not always the desirable. Let us just hope for the best. Meanwhile, General Musharraf has signaled to Benazir Bhutto that he is ready to share power with her once she wins the upcoming elections. This by itself is a positive development. More generous gestures are expected from General Musharraf toward his other political enemies. Let us hope they are forthcoming.

The Western powers supporting General Musharraf for his stand on the Global War on Terror must now intervene to lend their all-out support to the planned transition to civilian rule. The and have given some support for democracy in , yet this is certainly not enough. Much more is expected from the friends of .

A carefully planned transition, yet be achieved, may be beneficial to as well as its Western benefactors. Democracy in will take time to establish itself. That is in every one’s interest. We are quite sure about that. Therefore, both internal and external actors have a historic opportunity to help turn around for the better. The Chinese have a saying that every crisis situation has another side – that of an opportunity. History beckons. The time to act is now, and in the interim, let us all join hands to earnestly pray for the peace and security of the country. What is expected is that will move towards less authoritarian rule and not more. Democracy can only be established in the long-run not the short-term. Although, democracy is certainly desirable but yet expecting that all will be well by January 2008 is really expecting too much. In the meantime, a transition from military rule to a civilian one is yet to be achieved. Let us hope we have one. will be made better for it.