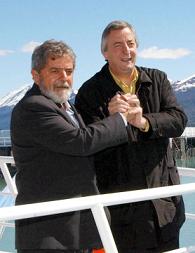 The Argentinians and Brazilians must overcome their old historic mistrusts, because there is no possible fate for an isolated , or for an isolated . The solution is to strengthen integration, which demands giving up individual ownership and sharing certain positions. There is no alternative, because the risk of inaction is to be converted into simple segments indifferent of the international market.

THE RECENT VISIT of Lula to legitimizes this reflection regarding . The country which seems to be the only one capable of leading the process of integration in that region, encounters many obstacles in this task. Those that stand out -even though he has not said it, even though he hides it, or changes the theme- include two: the historic mistrusts of the Argentinians, considered a difficult matter to administrate by Itamaratí, is the first, whilst the messianic Bolivarian delirium and megalomania of President Chávez (fueled by oil money) is the second.

“Is prepared to assume leadership of ?”

plays with a fact that no one denies: the urgency of integration, and its privileged situation to instigate it. In relation with the former, we pass to the word of Brazilian theorist, Helio Jaguaribe [1]:

In the process of this third wave of globalization, each time more parts of the planet are converted into segments of the global market, which solely retain apparent symbols of sovereignty: the flag, the hymn, etcétera, but that which are directed from outside by multinational corporations and the countries which hold jurisdiction over them. The decision making capacity of under-developed countries that have not achieved the minimum requisites of preserving their autonomy is simply symbolic.

is not prepared to remain in the bandwagon. During the 1950´s, the general Golbery of Couto and Silva proposed to Washington a position of strategic alignment with the United States in the East-West conflict, in exchange for the recognition of a Brazilian right to a manifest destiny in the South Atlantic.

Helio Jaguaribe, advocate of Argentinian-Brazilian integration, recalls the old stereotype that Brazilians perceived of Argentinians, which include being arrogant, presumputious, with aspirations above their capacity, and the Argentinian counterpart, which saw Brazilians as an irresponsible people, gifted with little seriousness, who are more interested in entertainment and in carnival than in working.

In 2004, Jaguaribe stated that this situation had changed:

The Brazilians now see Argentinians as a serious people, capable of working towards awareness, who are well organized, and who achieve the highest levels of education in all of .

Brazilians admire Argentinian society, and in particular they adore . The Argentinians, on their part, see as a struggling country, gifted with extraordinary energy and vitality, which behind an apparently lackadaisical outward appearance produces a great industrial society.

With a political realism that contrasts the narrow nationalist vision that prevails in Spanish speaking Latin American republics, Juagaribe knows that there is no alternative to integration, because the risk otherwise is being converted into simple markets, indifferent to the international market.

As Juagaribe said, there is no possible destiny for an isolated , or for an isolated . The historic mistrusts of the Argentinians (or that which remains of them) have to be overcome. The European Union would not exist if the mistrust between and remained an obstacle to the integrative impulse that history demanded.

TO WHAT LEADERSHIP CAN ASPIRE?

If Roman leadership was coercive, and that of and seductive, the leadership that aspires to meet is leadership which Jaguaribe calls cooptation, and in reality, through cooptation and consensus, the leading country proposes to something to which it agrees. And its leadership (taxed for its size, its situation, and its economy) will only be possible if there is a permanent consensus.

As like in this dynamic of integration, the relations between these two great Latin American countries are axial, Juagaribe says that: the ideal formula would be one in which the Brazilians teach the Argentinians a little of their eternal tendency to negotiotiate, and for the Argentinians teach the Brazilians a little of their combativeness and their tendency to embrace new ideas.

One might think that the Brazilian theorist would be the best adviser to the Argentinian government.