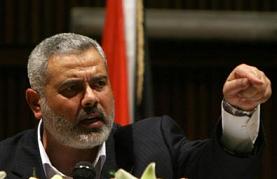 Experience demonstrates that radical groups often intervene during significant moments in order to deal harsh blows. The proximity of the between Mahmood Abbas and Ehud Olmert in , has already set off many alarms in : is Hamas trying to get noticed before the in November, because he was not invited?

ONE OF THE KEY ELEMENTS in the dynamics, one can suppose, will be developed in the peace conference in , in the . It will be precisely the list of those absent, a list headed by Hamas. This does not mean that the unresolved discrepancies and the good agreements between those who are present do not count, but for now, it seems that the shadow of those who were neither invited, nor wanted to go, will still be more significant.

Experience shows that radical groups (Hamas is not the only one, although it is the most represented) usually zero in on significant moments to hit hard. The warnings from the Intelligence agency, like the political declarations with respect the risk that the summit faces suggest Hamás may perpetrate an attack of great proportions in order to sabotage it, due to what has happened in the past and the warnings that come from Israel and Palestine.

“Hamas, is the one who controls , the largest time bomb in the road towards the search for a solution”

Those who claim that the suicide bombing attacks on half of the civil Israelí population are a demonstration of desperation of the establishment in the region, also must remember that on more than one occasion, the explosions occurred during periods of intense negotiation. So was the time of then Israeli Prime Minister, Itzjah Rabin, and his minister of Foreign Affairs, now President of Israel, Shimon Peres. This was when the phrase To combat terrorism as if there was no peace process, and negotiate the peace process as if there were no terrorism,origionated. It is clear though that this phrase is easier said than done.

Also, exactly because terrorism is conscious to the precarious positions of those who are seeking dialogue, particularly those who attempt to solve these discrepancies by means of conversation, terrorism will occur at the worst time.

ONE MORE GUEST AT ?

One could think, in order to avoid this risk, Hamás should be invited to the summit in . In this way, perhaps they could resolve the internal Palestinian disputes…but this is an illusion. The risk of costly attacks during the summit (a certain amount due to Hamás, and some on behalf of other radicals whom Hamás encourages, or at least does not stop) does not lie with those who are left outside, except when by definition; they oppose resolving problems with at the negotiating table.

“If it is difficult to imagine Hamás participating in the Annapolis Summit, one must remember that the implication of his absence almost guarantees in advance the failure of the reunion”

This is exactly the meaning of the sentence that has been said a short time ago by the congress members of Hamás in . Mushir el-Masri, criticized by the newspaper meetings between the Palestinian president Mahmud Abbas, and the Israeli Prime Minister, Ehud Olmert; if Abbas continue to meet with Olmert, it will quickly destroy his career.

Has this threatened the contents of the talks? Is he annoyed because Abbas has accepted something dangerous for the Palestinians? No. He is threatened because they have been talking, because Abbas continues to try to set in stone that which seems to be his conviction, which follows in the complex footsteps of Yasser Arafat in the Palestinian Presidency, that, with terrorism, Palestinians will gain nothing, and solely through means of negotiation, do they have any opportunity of achieving their dreams.

The problem, clearly there, is that, it may seem difficult to imagine Hamás participating in the Annapolis Summit, but on the other hand one must remember that the implications of his absence almost guarantees in advance the failure of the reunion. As well, already now, it is understood that there are still too many discrepancies between Israel and the Palestinian Authority of Abbas, that in order to reach an agreement of definitive peace during the summit, that which influences Abbas is not only these same discrepancies, but the difficult situation of the Palestinian President.

THE POPULATION OF , WITHOUT REPRESENTATION IN THE

The opinion polls within the Palestinian population demonstrate an increasing tiredness within the community with respect to the position of Hamás, but this still does not resolve the problems of Abu Mazen, who will arrive at the summit representing in fact only a part of his people.

“Abbas goes to the summit affirming that he represents all Palestinians, but knowing that his enemy, Hamás, controls ”

Furthermore, its been stressed this week that the West Bank and the Gaza Strip are an indivisible union, both part of a future Palestinian State, not achieved is a way out of the situation created in the middle of June, when Hamás took by force, by means of a violent Coup D´Etat, for absolute control in Gaza.

The declarations of the leader of Hamás, Ismail Hanye, who was prime minister of the United Palestinian Nation, until its destruction by Abbas, regard the need to bring Palestinians together, did not deceive Abu Mazen. The president is conscious of the hard pressures exercised regarding Hamás in , and this is what brought to Haniye the understanding that the government in the said zone is temporary.

But for now, Abu Mazen has rejected to establish contacts. In this sense, people of Al Fatah in , such as Abdallah Franji, clearly express their position: first they must give progress back to all that’s been made in , to return the power to Al Fatah, to apologize, and later, they will be able to see.

In the real situation, Abbas goes to the summit affirming that he represents all Palestinians, but he knows that his enemy Hamás, is the one who controls , the largest time bomb in the road, in the search for a solution.