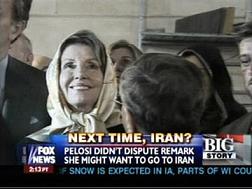 The author discusses his views about a form of new anti-Iranianism referring to a general attitude of disrespect and vengefulness supported by the American media post 9-11, sighting examples such as the visit of Iranian President, Mahmoud Ahmadinejad, to .

IT IS UNDOUBTEDLY DIFFICULT to establish a direct link between the type of promiscuous racist attitudes that spurn The Columbus Dispatch to liken Iranians to cockroaches and the racist attack on an Iranian salon owner in in September, 2007. But it is less difficult to link the new anti-Iranianism to a wider nihilistic attitude permeating some quarters of US American society and the political elites governing the country. I am not only referring to Debra Cagan, Deputy Assistant Secretary for Coalition Affairs to US Defence Secretary Robert Gates, who recently expressed that she hates all Iranians, to the dismay of visiting British parliamentarians, or to Anne Coulter who has repeatedly demanded the annihilation of Muslims more widely. I am referring to a more general attitude of disrespect and vengefulness that has become insidiously frequent in post-9-11 . Let me give you an example.

When the President of Columbia University in New York, Lee Bollinger, hosted the elected President of Iran, Mahmoud Ahmadinejad, only to attack him personally as a petty and cruel dictator, he did not only reveal a rather dismal understanding of the Iranian political system, he also showed that Iran has become a free-for-all place to be attacked and demeaned. I found it difficult to imagine a white head of state being treated in such a way. No, this type of bullying has always been exclusively reserved for the third-worlds, for the non-aligned, for those countries that fight for their independence. I have repeatedly expressed in my writings, and most recently in Iran in World Politics [1] that the neoconservative movement led by Ahmadinejad is not the white man’s burden, but a transitory phenomenon of Iran’s fluid and diverse domestic politics. It is not the role of a host, representing an with a proud tradition of progressive thinking, to insult his guest, no matter how reprehensible the politics of that guest are. I think that Bollinger chose to do so, in order to silence his critics who reprimanded him for inviting Ahmadinejad, especially the representatives of the Israel Lobby whose power to influence US foreign policy is comprehensively analysed in a daring book by Stephen M. Walt and John J. Mearsheimer.

Rather than using the occasion to educate the audience and other Americans more widely about what is and is not, Bollinger abused the hype created around Ahmadinejad to reinforce the general consensus, that is a singularly monolithic place, that there is no democratic process in the country, and that the country is a threat to international peace.

“In the , it appears to me, the mainstream media is informally impaired and partial; it does not capitalise on the formal liberties given to it under US law”.

Ultimately, his insults interlinked quite organically with Michael Hirsh’s designation of the President of Iran as Mahmoud the Entertainer (Newsweek, 24 September 07) and the American Israeli Public Affairs Committee’s SMS campaign disseminating Bollinger’s outbursts, minutes after they were made. There is no organised collusion here of course, but the disparate, yet surprisingly harmonious processes that reify what is perceived to be the mainstream view in the US are worth some thoughts.

The and the West more generally is very quick to point out that in many third world countries, including , freedom of the press is not safeguarded, and that informal ways to penetrate public discourse via the media are confined by the state. In the , it appears to me, the mainstream media is informally impaired and partial; it does not capitalise on the formal liberties given to it under US law. The effects are that the mainstream media in both countries act surprisingly similar. Both in and the , there is a tendency to reify the national consensus, the prominent difference is that in the case of the former this is enforced by the state, and in the case of the latter it is quasi-voluntary, engendered by a submissive, unimaginative media elite.

There is a second very pronounced difference that follows from this. Exactly because in everybody knows that the media is supervised, nobody really absorbs directly what is being said in official outlets.

“Ironically, when had a reformist president between 1997 and 2004, many commentators were quick to point out his confined constitutional powers“

Thus, Iranians are constantly forced to read between the lines, to diversify their sources of information, to foster a critical consciousness that explains the political situation of the country and world politics more generally. Conversely, in the , the mainstream media is officially sanctioned as a source of information, so many of its consumers naively presume a degree of impartiality. The official news thus absorbed is internalised much easier than in the Iranian context. I found both cultural situations utterly unsatisfactory; but I would add that the one in the is far more dangerous for Americans themselves, and more exponentially for the rest of the world. For isn’t it the that is involved in two massive wars that led to the deaths of hundreds of thousands of individuals, in and (on top of the devastating environmental consequences of the conflicts)? Weren’t US Army personnel the ones that systematically tortured Iraqi inmates at Abu Ghraib and elsewhere? Isn’t it the state that constantly pushes for aggressive action against , , , that adopts the rhetoric of force, regime change, etc.?

By all measures available to us, Ahmadinejad’s potencies to inflict harm on people outside of shrink to near-nil if compared to those at the disposal of George W. Bush. Ironically, when had a reformist president between 1997 and 2004, many commentators were quick to point out his confined constitutional powers. Now that the Islamic Republic has a confrontational President, however, people ascribe unimaginable powers to him, wilfully ignoring that he is merely the executive arm of the Iranian state, which is differentiated into a system of checks and balances, of which he is not even commander-in-chief, that his parties lost several elections and that many Iranian intellectuals predict his downfall in the next presidential elections. Why is it then that the tickets to his speech at sold out almost as fast as those granting access to the concert of Bruce Springsteen? Why is it that he is regularly compared to Adolf Hitler in the press, much in the same way Saddam Hussein, Fidel Castro, Gamal-Abdal Nasser, Daniel Ortega, or Hugo Chavez were/are compared to that Inbrunst of evil? Does this not degrade the crimes of the Nazis? Does it not insult the survivors of the holocaust? Does it not threaten to turn this absolute tragedy of human kind, into an expedient tool in the hands of dangerous ideologists? These questions remain unanswered, of course, partially due to the consensual political culture engendered by the US media, and partially due the dangerous activities of embedded academics whose understanding of scholarship is as compromised as their commitment to a rather more peaceful and empathetic dialogue among different cultures and peoples.