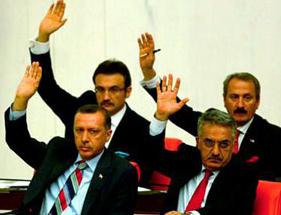 The conflict with the Kurdish guerrillas of the Workers’ Party that confronts the Turkish army could culminate in a large-scale, dangerous war operative that would end the fragile balance of the new . Meanwhile, the relationship between and is going through a period of strong and unusual turbulence. It is worth asking whether this is due to a simple situational uneasiness or if it is the accumulation of negative signals presaging a confrontation between the two strategic allies.

THE INCIDENTS RECENTLY RECORDED IN KURDISTAN, which have led to some forty mortal victims, accentuate the prevailing uneasiness in the upper military command, very prone to unleash punishment operations against the pro-independence Kurds.

The intervention by the American Secretaries of State and Defense has slowed down the Ottoman soldiers’ heavy response. However, it remains to be seen if ’s chief staff members will take pleasure in following the politics of self-control espoused by the .

THE FAILED ENCOUNTER BETWEEN AND AND

The truth of the matter is that the relationship between and is going through a period of strong and unusual turbulence. It is worth asking whether this is due to a simple situational uneasiness or if it is the accumulation of negative signals presaging a confrontation between the two strategic allies that in the past have shared the same fears, the same obsession: the undesirable resurgence of Russian expansionism.

“The Turkish establishment is not concealing its uneasiness towards the American approval of a resolution that condemns the genocide of the Turkish Armenian community” Russian or Soviet, it is of little importance; Turkey’s strategic situation, the Atlantic Alliance’s final stronghold in the confines of the Russian Homeland offered the Turkish politicians an infinite number of advantages when it was time to negotiate its agreements with the American administration.

It is superfluous to state that when the time came to consider joining the European Union, the apparent complicity between the two partners generated certain suspicion in the European capitals.

For many Western politicians, the special relationship between the Ottomans and the Other Empire poses an important obstacle, in that it questions the credibility of ’s pro-European discourse.

Curiously, the deterioration of the Turkish-American relationship could become an alibi for a possible (or more than probable) worsening of the fragile relationship between and the 27.

THE VENGEANCE OF THE TURKS AND THE ARMENIAN GENOCIDE

It is convenient to point out that the current crisis has two sides to it. On the one hand, is trying to block the operative devised by the Turkish generals against the PKK bases in Iraqi Kurdistan, which the Turks brand as an operation purely destined to avenge the deaths of some thirty soldiers and civilians recently assassinated by the separatist Kurds.

On the other hand, the Turkish establishment is not concealing its uneasiness towards the approval this past October 10th in the House Foreign Affairs Committee of the of a resolution that recognizes and condemns the genocide of the Turkish Armenian community, perpetrated by troops during the First World War.

It goes without saying that all of the modern Turkish governments have tenaciously denied the existence of the so-called Armenian Holocaust, alleging that in reality it was an unfortunate offensive against elements hostile towards the Imperial structure.

In this context, the possible ratification of the condemnation by the whole of Congress, prepared for the middle of November, infuriates . Prime Minister Erdogan called the Turkish ambassador in to answer urgent queries; President Bush himself did not delay in warning that the Congressmen’s actions put the bilateral relationship between the two countries in danger.

GREAT MOBILIZATION AGAINST THE KURDS

The dilemma caused by the worsening of the violence in the interior of the country has become even more complicated. In essence, up until the bloody attack in September, the Ottoman military command boasted of having finished off the PKK guerrilla, stressing the fact that the internal conflict generated by the Marxist faction, which had the support of the KGB and the Intelligence services of East Germany, had claimed more than 37,000 victims.

To combat the PKK Kurds, the State not only mobilized the army and the police, but also factions composed of extreme right militants or some radical Islamic groups.

“The president of , whose family committed itself at the time to Russian support of the fight for self-determination for the Iraqi Kurds, urged the PKK guerrilla to lay down its arms or abandon “ The complexity of that strange alliance has still not been carefully analyzed by political scientists; it involves, in essence, events that are both too recent and too controversial.

In the case of the operative against the PKK bases in the frontier region of Iraqi Kurdistan, ’s strategists lament the inexplicable passiveness of the American troops stationed in the neighboring country. The Americans turned a deaf ear to the complaints of the Turkish government’s chief staff members, who solicited their intervention against the guerrilla.

In the presence of the American denial, the Ottoman soldiers opted for a cross-border operative which, according to sources from the Pentagon, could seriously put in danger the political stability of Kurdistan, the only oasis of peace whose inhabitants don’t answer back to the American presence on Islamic soil.

The Turks were counting on a compromise solution, which would permit them to attack the PKK guerrillas with the logistical support of the American troops. However, the Pentagon warns that, if the moment arrives, the American contingent could face ’s own army units. But the North Americans prefer to not get involved in combat.

In turn, Iraqi president Jalal Talabani, who is also Kurdish and whose family committed itself at the time to support in the fight for self-determination for the Iraqi Kurds, urged the PKK guerrilla to lay down its arms or abandon the bases without further delay.

Although the Americans are not concealing their concern about possible measures of retaliation by the Erdogan government, the strategists are counting on the fact that said acts could have, as we had already pointed out, negative effects for the already difficult negotiations concerning the admission of into the European Union.

Bad omens, well, for the foreign policy of Ankara, keeping in mind the wave of Anti-Americanism that has been sweeping the public opinion of the Ottoman country following the occupation of Iraq by American troops and the growing percentage of detractors of the European Union recently noted in the heart of the Turkish population.