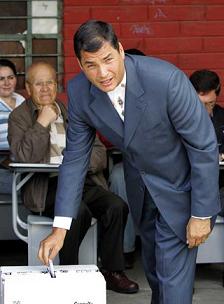 Ecuadorian president Rafael Correa, indisputable winner in the elections for the formation of the Constituent Assembly, has initiated his particular reform of all of the pillars of the government. Far from the initial dialog, the imposition defines the leader’s ways, and so we will have to see if Correa is a statesman or another caudillo, says the author.

THE PROCESS OF ELECTION of the constituent assemblymen was described as the mother of all battles by President Rafael Correa, indisputable winner of the elections of this past September 30th.

With the absolute majority of seats within the National Constituent Assembly which will be installed in the next few days, it will be possible to count the first member losses following the results.

This is a case of the particracy, which was pronounced dead after a long agony of approximately ten years, following the ousting of Abdalá Bucaram and the beginning of the democratic crisis.

CHANGES IN ALL FIELDS

Likewise, the legislative and judicial functions look weak. The National Congress, decapitated after an openly unconstitutional decision by the that removed 57 members from office, was threatened with its definitive dissolution by the government during the electoral campaign.

“We have been witnesses to an electoral process manipulated by those in power; Correa did not hesitate to use the same mechanisms formerly employed by the defunct particracy”

After Correa’s victory, the dismemberment began, since the members supportive of the regime have opted to resign.

The Supreme Court of Justice, reorganized after a process in which the citizens played a preponderant role, and which presented itself as a transparent contest of merits, hasn’t been exempt from the threats of dissolution. The president of the highest court of justice has demanded that institutionalism be respected.

Within the Executive branch, all of the secretarial positions have been placed at the disposal of the president.

THE STATE AS A PLATFORM

The campaign was described by the regime as the most democratic in history; however, we have been witnesses to an electoral process manipulated by those in power, since Correa did not hesitate to use the same mechanisms formerly employed by the defunct particracy during these elections.

The campaign was headed by the president, and the state apparatus served as an electoral platform to lead the campaign of the government candidates.

Cronyism was again the stressed topic, since increases in subsidies, the delivery of microcredits, and all types of donations coincided with each other. Additionally, the scam of the allotment of advertisement gave evidence to an unequal fight to gain power.

Nearly thirty days after the elections, our country’s very own territory has suffered substantial transformations: two new provinces that demanded the fulfillment of the campaign vacancies have been created. This is how de los Tsachilas and Santa Elena were born.

The leader’s first offering was an open dialog with all of the sectors, but, following the first few signs of moderation after the landslide victory, things have continued on the same course that they were on before the elections.

“The manner in which the government is managed is essential, and it can be warned that the process of the construction of a new will be a process of imposition”

This means that the offered dialogue has been transformed into an imposition, and this is shown in the positions adopted by the president in regards to the businessmen and banks.

The oil revenue was the next step, since, after the issue of the decree that regulates the distribution of the oil companies’ surplus revenue, the companies were threatened in the sense that if they did not accept the 1 per cent established by the regime, it would imply that the State would absorb the full 100 per cent.

In the background of the reform there is no other objective but to renegotiate and revise the contracts with the oil companies, who the president once again began to threaten by pointing out that if they want to leave the country, no one will ask them to stay.

The manner in which the government is managed is essential, and for this reason, as the ways in which the power relationships are administered adjust themselves to those of an authoritarian model, it can be warned that the process of the construction of a new Ecuador and its fundamental normative body, like the Constitution, will by no means be a process of consensus, but instead one of imposition.

is again opting for change, although as a pueblo we haven’t delineated how and to where we want to transform our country. This is shown by the fact that, in the past, the change was embodied by Bucaram, Jamil Mahuad and Lucio Guitérrez, Correa’s three predecessors who did not complete their terms because they did not reflect what the people wanted.

Rafael Correa has the historical challenge of correctly administrating an electoral victory. This task will reveal whether we are facing a statesman or are standing before another caudillo who embodies change and then disappoints at the end.