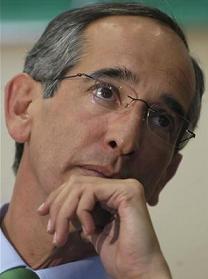 Álvaro Colom is the new president of after elections that were clean but marked by absenteeism and an elevated number of intentionally null votes. The principal objectives of the new legislature are to overcome the criminality rate, lack of security, poverty and low levels of production. Right now the key lies in governability.

(From ) ÁLVARO COLOM WAS ABLE TO ASCEND TO THE PRESIDENCY of on his third try. He is confronted with a country that is suffering from a very high delinquency rate, an extreme lack of security, and one of the highest percentages of inequality in , along with an alarming unemployment rate. He has four years to attempt to remedy these structural problems, and he has challenged himself to obtain concrete results within 100 days.

After two electoral rounds that were exhausting for the candidates, the population, and the national and international electoral observers, Colom managed to become president of . The elections have been clean, but improvements still need to be made. The man in charge of the European Union’s electoral observation mission, Wolfgang Kreissl-Dörfler, highlighted, among many other things, that the campaign and pre-campaign should be shorter and that there is a lack of efficient mechanisms to supervise and control the parties’ expenses in those activities.

Otto Pérez, a retired general and a harsh candidate, lost with a campaign that promoted punishment by example for the delinquents and managed to win over much of the population. Harsh Hand was its motto. If we take into account that five months ago nobody supported Peréz, and that he has now been nearly victorious, we can get an idea of the desperation that the Guatemalans live in with respect to the organized and unorganized crime that ravages the country. Those who voted for Pérez forgot the soldier’s performance during times of armed conflict, in which he was responsible for many deaths, causing various human rights groups to brand his actions as genocide while providing proof for this accusation. The daily pragmatism that defines current , indigenous and mestizo, could give Pérez the victory within four years.

“Colom admires Rodríguez Zapatero and Michelle Bachelet, and he is characterized by using the words willingness, dialog, negotiation, and tolerance to the umpteenth power, which is still valued very little by the majority of the Guatemalan population”

This is the same four years that Colom has to reduce poverty, generate employment, end the lack of security and increase the productivity of his country. He calls himself a social democrat, but someone who hears this and is not familiar with can get confused.

Ideology in Guatemalan political parties shines brightly because of its absence; it is possible to find politicians that have been in 4 or 5 parties without having any problems. There is even one who was with Colom in the first round of these elections, and with Pérez in the second one. Being a politician is simply another job in this marvelous Central American country.

Even so, Colom admires Rodríguez Zapatero and Michelle Bachelet, and he is characterized by using the words willingness, dialog, negotiation, and tolerance to the umpteenth power. Personally, I find it admirable along general lines, but it is still valued very little by the majority of the Guatemalan population. He has evidently won the elections, but we shouldn’t forget the very high level of abstention or the high number of intentionally null votes.

If Colom implements an effective program that makes an impact within the first 100 days in office, he would earn needed credibility from internal and external politicians, economists, and social workers. The international community needs more to be able to invest in . The Guatemalan population needs more to be able to believe in the new president.

One of the key points will be the governability of the country; because without it nothing of what Colom might propose will be able to move forward, since his party does not hold the majority in Parliament. He will have to effectuate the agreements that he had been working on with the parties that have been left out of the second round. Without them his projects will not be able to achieve much. There has already been a positive response from various leaders, some of whom helped him win the second time around, like Álvaro Arzú, the ex-President of the country and current mayor of the capital.

Colom should be able to obtain support from the Great National Alliance (GANA in its Spanish initials), the Unionist Party, the Center of Social Action, and especially from the Meeting in (Encuentro Por ). Above all, he should be able to gain support for his social projects from this last group. But the shadow of the turncoat, which in this case could be both a problem and a solution for governability, continues to have an influence on all of the Guatemalan parties. This is a problem because members of Colom’s party, the National Unity of Hope (UNE in its Spanish initials), might defect to other political groups, which would be an advantage because others might join the President Elect’s party and contribute votes.

ISSUES THAT CAN’T BE AVOIDED

Coinciding with the Guatemalan voters’ pragmatism, there should be demands for what can be accomplished. The country is not going to enjoy a radical transformation during the next four years, but Álvaro Colom has the obligation to work on some of these points without any hesitation.

The reduction of assassinations in general, but those of women in particular, given that they are turning into a historical curse for the country. They are indiscriminate, cowardly and reactionary; in the majority of cases they kill them simply for being women. All of the State’s strength should be concentrated on this. In the process the security forces, which for the moment, at best, look the other way, should be purged of what needs to be purged.

Raising the employment rate; making agreements with economic and social forces with which there has already been rapprochement.

The task is immense, but in order for Colom to pass the first exam that he himself has imposed for his first 100 days, he needs to start truly acting from somewhere. Of course, looking at the situation carefully, improving the way that things are now is not a very complicated thing. The”problem is that the word hope has been diluted so many times in that it frightens people to pronounce it in vain.