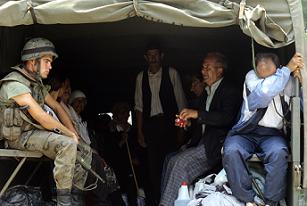 Kosovo’s independence is inevitable, given the failure of multiethnicism in the Balkans, the overwhelming support it has amongst Kosovars, and the fact that Serbia’s grip upon the region is currently only nominal, argues the author. He suggests that the EU should play a more important role in mediating the conflict and attempt to implement the main parts of the Ahtisaari Plan. At the same time, caution must be exercised, so as to avoid a crisis with Serbia or Russia, as well as a repeat of the gruesome violence that gripped the region during the 1990s.

NEGOTIATIONS CONCERNING SERBIA´S BREAKAWAY PROVINCE OF KOSOVO finally broke down Wednesday, November 28, without an agreement being made between Serbia and Kosovo´s ethnic Albanian leaders. This came as no surprise, for after more than two years of protracted discussions concerning Kosovo´s final status, held under the auspices of the United Nations and the so-called Contact Group (US, Germany, Italy, France, Great Britain and Russia), the positions of both parties remained basically unchanged: Serbia is willing to grant Kosovo something more than autonomy but less than independence, and Kosovo´s ethnic Albanian majority (some 90 per cent of the population) wants nothing less than outright independence.

“ethnic Albanians overwhelmingly want to run their businesses on their own, while to most Serbs, Kosovo is part of the Serbian motherland” Eight years into a UN trusteeship of the province set forth in the UNMIK [1] Mission, this is the worst possible scenario. The deployment of both the UNMIK and NATO forces that are stationed there (KFOR [2]) was mandated by the Security Council in 1999 after NATO´s air campaign ended Milosevic [3]´s ethnic violence against the Albanians, who in turn had organized a guerrilla-like resistance in the form of the KLA [4] (Kosovo Liberation Army), leading to the displacement (and killing) of Serbs. UNMIK was entrusted with the administration of the province and overseeing the gradual transfer of power to Kosovo´s provisional autonomous institutions (pending a decision on the final status), whereas NATO was to guarantee security and deter further outbursts of hostilities, particularly retaliations against the Serb minority, who comprise roughly 6 per cent of the population and are mainly concentrated north of the river Ibar. Serbia was deprived of playing just about any role in Kosovo, having to withdraw its army and police forces.

“There is some worrisome evidence of the existence of an important black market economy and crime-prone mafias with increasing influence all over the region” Unfortunately, community relations between both ethnic groups have been difficult since then, being marked by occasional riots. Likewise, relations between Serbia and Kosovo have been hostile; ethnic Albanians overwhelmingly want to run their businesses on their own, while to most Serbs, Kosovo is part of the Serbian motherland. Furthermore, the Serb minority, at the behest of the Serbian government, has been boycotting the autonomous institutions while de facto running parallel ones.

Moreover, the overall socio-economic picture in the province is rather gloomy: unemployment is widespread and it is rife with corruption. There is also some worrisome evidence of the existence of an important black market economy and crime-prone mafias with increasing influence all over the region. Scant progress has been made towards the establishment of solid rule-of-law based institutions, which is a testament to the near failure of the standards policy called for by the international community few years ago, which set forth levels of progress on a number of issues (such as minority rights, redressing poverty, etc) needed to be achieved before any decision on the status of Kosovo was to be made.

“The Ahtisaari Plan was rejected by Serbia and, although it drew support from the US, the EU and most of its Member States, last summer the Plan failed to pass the crucial test of a UN Security Council blessing” Hopes were raised somewhat earlier this year when, reckoning that the negotiations would not produce a mutually agreed outcome, Martti Ahtisaari [5] (the UN´s Special Envoy for the future status process for Kosovo) produced a bold proposal designed to grant Kosovo a conditional or supervised independence: the Ahtisaari Plan. With final independence deemed to be the only viable option for the province, the Plan intended to somehow strike a compromise between both parties. Significant concessions were bestowed to the Serb minority through a technical and detailed Comprehensive Proposal for the Kosovo Status Settlement, which provided decentralization measures, protection of Orthodox religious heritage, enhanced Serb municipalities, double-majority voting safeguards in Parliament and other minority rights. It seemed that the Plan subtly laid down the steps towards Kosovo´s final statehood (for instance, Kosovo would have an army and could join international organizations), to be achieved after a transition period.

However, that statehood in fact resembled more of a protectorate, as a high-ranking EU official (the International Civilian Representative) would indefinitely wield strong powers over the passing of legislation and the performance of public officials, until the main international players came to the conclusion that Kosovo authorities had duly implemented the (rather demanding) Settlement. Furthermore, UNMIK was to be substituted by an EU Mission that would monitor the rule of law, and NATO troops would stay put for the said indefinite time period.

The Ahtisaari Plan was rejected by Serbia and, although it drew support from the US, the EU and most of its Member States (even if some of that support was lukewarm), last summer the Plan failed to pass the crucial test of a UN Security Council blessing. Russia, adamant that it would not embrace any outcome which disregards Serbia, threatened to veto a Security Council resolution endorsing the Plan.

SO, WHAT´S NEXT? THE CASE FOR EVEN STRONGER EU INVOLVEMENT IN THE REGION

The UN Special Envoy is supposed to report back to the UN Secretary General, Ban Ki-moon [6], no later than December 10, and Kosovo´s leadership has repeatedly vowed to unilaterally declare independence soon afterwards. Serbia, in turn, has now threatened with a blockade. Thus far, both parties are committed to not resorting to violence, although several difficult scenarios may appear. It remains unclear, for example, how those Serbs living in the north, and making up a majority of the population there, will react. In particular, it remains to be seen whether or not Serbia will try to partition the province (an acceptable option to the Serbs). The dark clouds of the appalling violence that gripped the region in the 90´s once again loom large over the area.

“All hope is not yet lost. The Europeans should still try to implement (and demand Kosovo´s leadership to accept) the main points of the Ahtisaari Plan, particularly those concerning NATO’s provision of security, external oversight and protection of minority rights” Some argue that the new state will be born without clear UN legal cover, since the relevant Security Council resolution, 1244 [7], is still in force and recognizes Serbia´s sovereignty and territorial integrity while only requiring substantial autonomy and meaningful self-administration for Kosovo. Hence, stripping Serbia of a part of its territory would sow the seeds for other secessionist movements on ethnic grounds, thus setting a dangerous precedent in international law.

These arguments are not without merit. However, the truth is that multiethnicity has largely failed in the Balkans, and so Kosovo´s independence, which is supported by almost every Kosovar, seems unavoidable at this point in time, especially since Serbia’s grip on the region is merely nominal. This disaffection largely stems from a population alienated by Milosevic´s repressive policies.

The stakes are particularly high for the EU, which must prove its value as a credible international player as never before. Although most Member States seem bent on recognizing Kosovo, there is no need to force reluctant countries to follow suit anytime soon. A crisis with an ever nationalist Serbia, let alone with Russia, must also be avoided as much as is realistically possible. Further engagement of Serbia with the carrots of an association and stabilization agreement (which are being discussed right now in Brussels) might be a good start, provided that Serbia´s reaction remain within the boundaries of diplomacy.

All hope is not yet lost. The Europeans should still try to implement (and demand Kosovo´s leadership to accept) the main points of the Ahtisaari Plan, particularly those concerning NATO’s provision of security, external oversight and protection of minority rights. EU leaders must also make clear that Kosovo constitutes a unique case, which it indeed does.

To conclude, the coming months of 2008 will require both a sensible and unwavering EU involvement in Kosovo and the Balkans in general, if we truly want to turn the pages in one of the most shameful chapters of our recent history.