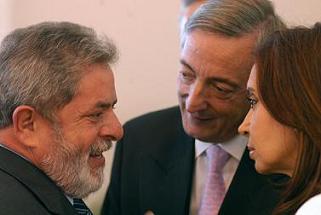 Among other topics, relations with , , and , the reactive gestures and pragmatism with , economic management and the renegotiation of the foreign debt have marked ’ foreign policy during Néstor Kirchner’s term of office. To understand what challenges Cristina Fernández de Kirchner will face in the realm of foreign policy, in this article I take stock of ’s achievements and mistakes during the period of 2003–2007.

(From ) NESTOR KIRCHNER WILL NOT BE A PRESIDENT remembered for his hesitancy or lack of decision-making. On the contrary, the Patagonian leader that led during the last four years was never a man who was fond of gray areas or intermediate stances. Whether his decisions are liked or not, the truth of the matter is that Kirchner exercised his power effectively. And, contrary to what those from several camps claim, the sphere of foreign policy has not been an exception.

It is true that, in regards to matters of foreign policy, the orientation and the implementation of his decisions can be justifiably criticized. However, what is not easily acceptable is to maintain that did not have a foreign policy during this time.

What follows is a brief analysis of the outcome of ’s performance in international matters during the period of 2003 – 2007. With the objective of identifying the good choices and the errors made by the administration, the analysis will go from the general to the specific. Its aims are exclusively analytic, and it will be divided into two stages: the first, from May 2003 to October 2005, and the second, from October 2005 to the present.

Before thoroughly analyzing the two cited sub-periods, it is necessary to evaluate the foreign policy of the four years in a general manner. In general terms, the orientation of international matters was rational, with the fundamental idea being the defense of human rights and the search for prudent quotas of autonomy. Convictions and realism were combined in a variable way, arriving at a final result that could be defined as, at least, acceptable.

“The renegotiation and lack of payment of the foreign debt was the key topic of the period of 2003 – 2005”Within this framework, relations with started out bearing the burden of false information and mistrust, only to end up being marked by encouraging empathy. As for the , the bond had its nuances. Beyond the Argentinean President’s criticism of some of ’s policies, in general carried out in order to earn interest on the growing domestic anti-North Americanism, what is certain is that followed the great power’s more rational initiatives (definitions against international terrorism, legislation against narcoterrorism and money laundering, etc.) Also, Kirchner knew to distinguish himself from American policy during all of the republican leader’s outrageous acts, especially in reference to the failed war in .

Up until this point, we have seen the positive aspects of the management. However, this generally correct path was often poorly implemented and recurrently led to lamentable contradictions, like, for example, the endless dispute with over the paper factories and the current dark parallel diplomacy with .

This first phase of foreign policies covers the period beginning with Kirchner’s ascendance to office on May 25th, 2003, up until the legislative elections in October of 2005.

“Relations with the United States in the first phase were dominated by rhetoric somewhat more fiery than that of the previous governments, with the criticism directed especially at Washington’s role in the International Monetary Fund (IMF) during the crisis of 2001”In this phase, some characteristics that will remain constant in the management of foreign policy stand out. As the Argentinean academic Robert Russell has maintained, Kirchner’s government is characterized by a rough, confrontational style of government, averse to criticism and by a particular aversion towards foreign policy topics on the president’s part. Nevertheless, Kirchner’s discomfort for international issues should not be immediately translated as a lack of foreign policy, like it has been in various sectors.

This first phase was dominated by a central topic, correctly resolved, and by several secondary topics, which were not always approached in an efficient manner. The renegotiation and lack of payment of the foreign debt was the key topic of the period of 2003 – 2005. In regards to this, there was a clear international strategy conceived by President Kirchner and his Minister of Economy, Roberto Lavagna, the result of which, at the end of the day, was successful.

Of the 102 billion dollars not paid, taking into account the capital and interest owed, they deposited nearly 78 billion in exchange. That is to say, 76 percent of the total. The government has estimated the percentage of debt to be cancelled by the creditor at 66 percent (including the 24 billion of credits not deposited in exchange), which represents a savings of more than 45 billion dollars for the country.

“The bond with stems more from business and mutual benefit than ideological affinities”As for the rest of the topics, it is worth mentioning the relations with the , which were dominated by rhetoric somewhat more fiery than that of the previous governments. The criticism was especially directed at ’s role in the International Monetary Fund (IMF) during the crisis of 2001, yet was always careful to not directly attack President George W. Bush.

In addition, the renegotiation of contracts with the privatized public services businesses stands out in this first stage. The Argentinean government deliberately avoided moving forward in this matter, and it will be, together with the Paris Club [1] debt, one of the thornier international topics for the next government.

Finally, the period included certain short circuits with due to the difficulties in fulfilling the provision of gas, and due to some false intelligence with , in the bilateral camp as much in Mercosur’s interior.

After the legislative elections of 2005, in which the ruling party won by a landslide at the ballot boxes and so overcame the problem of being legitimate (it is worth reminding that Kirchner had come to power in 2003 with 22 percent of the votes, deprived of the possibility of a second electoral round), the president found a scene that was apparently favorable to face a more orderly foreign policy. Nevertheless, the outcome has been unequal.

Among the aspects to emphasize, it is important to point out the appointment of Jorge Taiana (who is the Secretary of Foreign Affairs and International and Educated Commerce) as chancellor. He is a man with a lot of training in international matters and notably contributed to the improvement of the image of the country to the outside world. However, Taiana did not manage to gain complete control of all of the diplomatic affairs, given that the strategic relations with and remained in the hands of a parallel diplomacy of which the Minister of Federal Planning, Julio De Vido, is in charge.

“It is urgent to eliminate the tendency for excessive personalization and decision concentration from ’s foreign policy”In regards to , it is important to point out that the bond with stems more from business and mutual benefit than ideological affinities. Thus, the Kichnerist neo-development has very little to do with the 21st century socialism of Hugo Chávez Frías.

What’s more, it is also worth considering the important level of understanding that Kirchner and his Brazilian colleague, Luis Inacio Lula da Silva, arrived at concerning the errors of the phase of 2003 – 2005. In this sense, a great desire to face the problems of Mercosur, especially in what it does to the institutional matter and the asymmetry that the smallest countries in the bloc ( and ) suffer, is observed in the Government House () as much as in the of ().

Lastly, Argentinean-American relations have kept the tone of the 2003 – 2005 period. Despite the fact that the Department of State, taking note of President Kirchner’s reactive gestures (the Mar de Plata Summit of November of 2005 and the Argintinean president’s invitation to the Venezuelan leader while George W. Bush was visiting the neighbouring country of Uruguay) lowered the grade of bilateral relations from excellent to positive, what is certain is that the coinciding viewpoints and the collaboration on topics of great importance for the foreign agenda of Washington (no nuclear proliferation, money laundering, the fight against the trafficking of narcotics and regional terrorism, etc.) continued unaltered.

The foreign policy of the new President, Cristina Fernández de Kirchner, will have to deepen the appropriate path of Néstor Kirchner’s management: the defense of universal values (human rights and no nuclear proliferation) and combined amounts of realism and prudent autonomy, in the framework of cooperative relations with the principal world power () and the greatest regional power ().

“It is fundamental that the bond that, aside from the ideological coincidence between the leaders has not consolidated together all that is necessary, be recovered. This means the Argentina-Brazil-Chile (ABC) axis, which is vital for regional integration and the peace and stability of ”However, even if these correct guidelines are followed, it will not be enough for international success during the current term. It is urgent to eliminate from ’s foreign policy the tendency for excessive personalization and decision concentration, which has led to the difficult matter with concerning the paper factories and the suspicion of corruption in the parallel diplomacy with in the four years from 2003 to 2007.

Finally, it is fundamental that the bond that, aside from the ideological coincidence between the leaders has not consolidated together all that is necessary, be recovered. This means the Argentina-Brazil-Chile (ABC) axis, which is vital for regional integration and the peace and stability of . Reestablishing the link is fundamental to offset ’s destabilizing potential in South America and to develop strategies that would enable ’s interference and influence in the region to be contained.