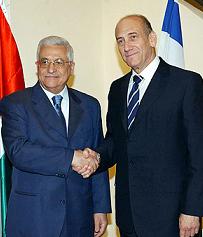 Will the agreements that come out of truly be implemented? Recent history demonstrates that Israelis as well as Palestinians have wielded arguments posterior to those that spoiled the achieved approximations. What will happen if the in fails?

(This analysis was written before the Summit in Annapolis) THE AMERICAN SECRETARY OF STATE CONDOLEEZA RICE has clearly expressed how George W. Bush’s administration hopes the current Palestinian-Israeli peace process develops. The Palestinian president, Mahmoud Abbas, and the Israeli prime minister, Ehud Olmert, will carry out preparatory meetings to define the most important elements of a future agreement. Finally, the preliminary dossier will be presented before an international conference that will meet in in the next few days (probably November 26). Although it is more than evident that the Palestinians and Israelis have their own clear positions, this is not the situation with respect to the final result of the . The two sides are working, and they understand that the result of will be agreed upon beforehand.

What continues to be uncertain is whether the agreements will be able to be practically implemented. The transformation of history shows that the two sides have wielded arguments posterior to the agreements that spoiled the achieved approximations.

In , the chief of Israeli diplomacy, Tzipi Livni, confirmed to her American colleague that ’s security comes before any other demand, including the creation of a . The Israeli Minister of Foreign Relations understands very clearly the distinction between the pragmatic Palestinian leaders and Hamás’ pro-Islam movement.

For Livni, the pragmatic Palestinian leadership must understand that the wheels of future agreements will only start turning in concordance with the Road Map for Peace phases, although the biggest obstacle is that this plan for international peace is currently dead; this means that ’s security comes first, and the creation of a afterwards. These declarations by the chief of Israeli diplomacy indicate that her government does not want a new terrorist State in the region. Given that that is neither within the interests of , nor the pragmatic Palestinian leadership, up to this point there are no elements that could be perceived as negative by the moderate Arab countries.

“It is probable that Ehud Olmert’s government sees in the Intifada and the global advancement of radical Islamism that his state is currently under a concrete threat from several dangers”But Livni has insisted upon an indivisible as a capital, and still has not touched upon the matter of permitting the Palestinian refugees to return. The Arab side has equaled the negativity of the Israelis, refusing to recognize in any border incarnation whatsoever; they haven’t insisted in the 1967 borders either.

It is evident that the prior process is driven by the assumption that the two sides could accept the so-called Taba Plan of 2000.

Let’s remember that Taba was developed after the failed meeting at by technically unofficial representatives and negotiators and established among other things:

a) An Israeli retreat to the 1967 borders, retaining only the settlements around but reducing the corridor between and Tel Aviv.

b) Upon its creation, the would be compensated with an equivalent part of Israeli territory—possibly—from the sparsely populated .

c) The Israeli government would be willing to cede ’s Arab neighborhoods as the capital of a .

AND ITS GROWING VULNERABILITY

If the situation is really carried towards the Taba Plan, it would reflect a very significant change in the positions of both sides. It is probable that Ehud Olmert’s government sees in the Intifada and the global advancement of radical Islamism that his state is currently under a concrete threat from several dangers, which are:

“The emerging fear of has caused a reordering of priorities in the Arab world”First: A scenario of growing vulnerabilities, where the principal threat will not be a conventional war like those of the past, but instead the attacks by terrorist groups lacking a defined geography operating from small, mimicked and mobile cells.

Second: The unsolvable demographic problem. The alternative to a Two-State Solution could be one single State” where the Jewish population would come to be the minority.

Third: The concrete pressure and the threat to the State of Israel’s existence before the nuclear proliferation of the region, especially ’s.

Fourth: An international scenario in which finds itself more and more isolated due to the growing anti-Israeli stance in and in small American political groups whose presence is growing.

At the same time, the emerging fear of has caused a reordering of priorities in the Arab world. For the moderate Sunni States, the principal worry has become the danger of a hegemonic and nuclear . The confluence of American, Arab, Israeli, and European factors and worries encourages the expectation that an agreement between and its Arab neighbors could alleviate, or even resolve, their common fears.

WILL DIPLOMACY BE ABLE TO FULFILL EXPECTATIONS?

Surely this will be seen when the time for implementation comes; it is possible that in that moment a series of technical but unavoidably dilatory questions will be presented. What would be the consequences of an impasse in this scenario?

“Whatever preliminary action that pressures and harasses the political capacity of the parties involved will impede definitive progress and would do nothing other than stimulate the radicals to use such pressure to destabilize the entire region”In the present diplomatic rounds it is more than evident that the speakers of both sides are facing internal instability. The coalition that governs has collapsed and the cabinet’s approval rates are at their lowest levels. The elimination of the West Bank’s seats would constitute a traumatic experience for ; all the more, because the Israeli concessions (ceding seats) are concrete, immediate and permanent, while the Arab concessions (recognition of and normalization of relations) are abstract and revocable.

What is certain is that in the future, the process of peace will fuse with the generic conflicts of the . The in will definitely not be the end of a process; it should instead be the starting point of a new and potentially hopeful phase that should continue in future administrations. And it should not be guided by the American political agenda or calendar. If the Arab countries that are friendly to the and are asked to withstand more than what they are able to resist, such a request would run the risk of tensing the situation that would inexorably end in a serious explosion of great magnitude.

Whatever preliminary action that pressures and harasses the political capacity of the parties involved will impede definitive progress and would do nothing other than stimulate the radicals to use such pressure to destabilize the entire region. The American leadership over the base of realistic parameters with and the moderate Arab countries constitutes an unavoidable prerequisite for success in .

The firmness of the moderate forces depends on the position of the in the region, and not only in regards to . Just like in , in the American influence will not be seen favored by an image of retreat. All of the pueblos in the region, friends and enemies alike, will be judging the total sum of the United States’ objectives and, of course, its true effort, concrete and genuine, to achieve them.