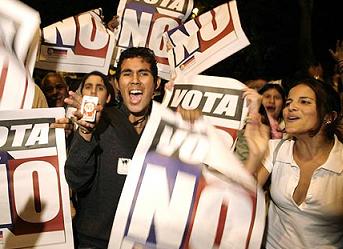 Hugo Chávez must build bridges to the other bank: if the president suffers from arrogance, his adversaries lack the slightest bit of endurance, says the author. If the rise in internal confrontations and the excessive international pressure following the referendum persists, there will be a strong social split. Dialog and internal consensus are missing in the of today, and barriers abound, he points out.

(From Caracas) THE POLARIZATION IN VENEZUELA is a verifiable phenomenon. It is only necessary to visit the country for a couple of days to see that the ideologies of both sides permeate reality, altering the coexistence and unsettling the more day-to-day relations. The recent rejection (by a very slim margin) of the constitutional reform proposed by president Hugo Chávez will, with difficulty, serve to cool spirits down in this South American nation. Up until now, the Venezuelan leader has stuck to the democratic script, from his resort to legality by refusing to review the RCTV license, to the quick acceptation of the results of the plebiscite, passing to the head of the Government by means of his reelections.

It is obvious that Chávez’s intention is to create a socialist State with markedly Latin American overtones (Bolivarian according to the official terminology) that moves away from the extinct Soviet model as much as from the Cuban one.

“In spite of the international harassment and the media manipulation that is exerted both from within and outside of the country with headlines that, when not fallacious, are simplified, Chávez continues to have a broad band of sympathizers”

It is enough to focus on the express recognition of private property laid out in one of the articles of the failed constitutional reform, or on the full force of groups, parties, and the media (newspapers, radio and television) that confront the line of thought that the Palace of Miraflores exudes, in order to confirm that for now, the Venezuelan leader, in search for political predominance, banks on plurality and not on the exile of ideas that are alien to it.

In spite of the international harassment and the media manipulation that is exerted both from within and outside of the country with headlines that, when not fallacious, are simplified, Chávez continues to have a broad band of sympathizers, above all among the most deprived classes who for the first time in many years are strolling through Caracas unarmed and are making their worries known, in the street as much as in the workplace.

And this is how every so often, people of very diverse conditions, especially the more disfavored, express themselves to the visitor.

VERY LITTLE ENDURANCE FROM THE OPPOSITION

The opposition, on the contrary, feeds above all off of the middle and upper classes, whose members understand that, in view of the progressive socialization of the country, their privileges are in danger. But if the President suffers from arrogance, his adversaries lack the slightest bit of endurance. If the programming of the state-run channels usually comes in one color, the message from the adverse media arrives loaded with dynamite. If lightning strikes on a sidewalk, thunder cracks on the one in front. Both sides are learning to hate each other. And this can indeed be the beginning of a social split that would harm the whole of the Venezuelans, beyond the militancy of every one of them.

“It is up to the citizens of this country to decide, in private and at the ballot boxes, as they have just done, the State model with which they would like to navigate as a collective”

The corruption, inherited in a large part from anterior administrations, the bureaucracy that resists any type of change with its habitual corporatist spirit, the Bolivarian leaders of late, the excessive optimism that is in the air of the official environments, the obsession for a cooperative movement that needs much more than good intentions and subventions to function properly, the proliferation of official groups dressed up as social conscience ones and the excessive prominence and verbal incontinence that characterize President Hugo Chávez are all important obstacles for the normalization of Venezuela.

However, it is up to the citizens of this country to decide, in private and at the ballot boxes, as they have just done, the State model with which they would like to navigate as a collective. External meddling and the active tendency of the opposition to consider themselves victims can only contribute to the distortion of a process that up to this moment, I insist, is developing in a political, economic and social setting that is more than admissible. Whatever may be the case, a cessation of the unilateral hostilities is not enough.

THE THIRD COUNTRY THAT DOES NOT CONVINCE ANYONE

Following the referendum, whose strong abstention (44.11 per cent) suggests the appearance of Venezuela as a third country that does not convince either of its sides, Chávez must build bridges to the other bank and bring some tranquility to the neighborhoods that feel excluded. If both the rise in internal confrontations and the excessive international pressure continue, we will not only witness the persistence and fortification of the regime in Caracas, but also a severe upset, organic in nature.

And it is possible that there will then be no workable solution.

In short, dialog and consensus is missing in the Venezuela of today, and there is a surplus of barriers.