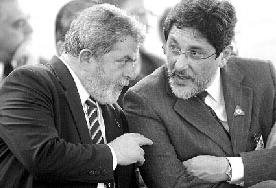 No one doubts the overwhelmingly strong force that is the current Brazilian economy. Brazil’s production represents a third of the total of Latin America. Large local conglomerates in the sectors of iron and steel, mining, oil, and manufacturing are paving the way toward globalization. However, optimism decreases upon reviewing some empirical data. Why economic growth less than expected, including a 5 percent average growth rate, one inferior to its neighbors. Is it the responsibility of the Central Bank of Brazil and its monetary policy? Divisions among analysts.

(From San Paulo) INCREASING AMOUNTS OF GOOD NEWS and announcements are fueling the optimistic climate of Brazil’s economic environment.

This virtuous economic cycle is based on certain aspects such as the announcement of significant investments by large local conglomerates in sectors such as iron, steel, mining, oil, and manufacturing. This focus of investment on Brazil, is paving the way for many Brazilian business toward increased globalization.

Advances in development of the local capital market are becoming more sophisticated, with operations at increased volumes and the recent opportunity of financing these businesses through participation in New York Stock Exchange.

The domestic plan is to increase the number of businesses that open their capital to the public in the stock market through initial stock offers, known as Indicial Public Offering, or IPO [1].

“The rate of annual investment in the last 5 years has not exceeded 17 percent of the Goss Domestic Product (GDP), and it is below the 21 percent seen in the region”

Also, in the financial sector, is important to emphasize the increase of the value of the stock market in San Paulo that has increased eight fold since 2002 until today, reflecting factors such as favorable expectations of the market regarding the performance of the economy, expectations of achieving an investment grade rate evaluated by risk assessment agencies, and finally an elevated level of international liquidity.

This last factor was responsible for a wave of unprecedented direct foreign investment in in the last years, reaching figures around 35 billion dollars during addition, the larger domestic interest rates, with respect to the international ones, created a differential which attracted considerable magnitudes of financial capital to the local stock market, favoring developmental growth of institutions as the key of saving and financing the private sector.

However, this exuberant optimism contrasts with some doubts that arise from analysis based on empirical facts.

A COUNTRY NOT GROWING AS IT SHOULD

Brazil’s Gross Domestic Product reflects the character of the hegemonic economy of the region, as it is responsible for a third of the production of Latin America. However, its average growth rate has been around 3 percent a year, in the last five years, and it has remained below the regional average, that reached levels around 5 percent annually.

“The potential growth of the Brazilian economy demonstrates a high sensitivity to the formation of fixed productive capital.”

Countries like , , and , among others, grew more than . The rate of annual investment in the last 5 years did not surpass 17 percent of the Gross Domestic Product (GDP), which is less than the 21 percent seen in the region.

The discussion here is the high fixed rates of interest set by the Central Bank of , a direct consequence of the utilization of monetary policies as the primary tool for controlling inflation, which limit ’s opportunity to grow at the same rate as other emerging countries such as , and . The answer causes differing opinions among analysts and local economists

According to a recent study by the Getulio Vargas Foundation, the potential growth of the Brazilian economy shows an increased sensitivity toward the formation of fixed capital product.

“Are the high interest fixed interest rates of the Central Bank of , created to control inflation, hindering the rate of growth of compared to other emerging countries?”

The aforementioned study demonstrates that given the growth of the workforce, the improvement of education, and aspects that link productivity, like the incorporation of technology and institutional quality, the economy could not grow more than 5.5 percent per year, and a condition necessary to increase growth is a rate of investment of 22 percent of the GDP, significantly larger than the current rate of 17 percent. In order to reach this last value, the rate investment should be greater than that of the GDP.

Given the relevance of higher rates of interest in order to achieve the goals of inflation, and given the international context of liquidity, the question is how to make the necessary investment viable in order to accelerate the growth of the GDP to levels comparable to that of other emerging countries