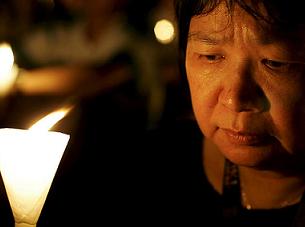 Xulio Rios believes that the majority of the problems that caused the manifestations in Tiananmen Square eighteen years ago are not only still present in China today, but that many of those problems have gotten worse: corruption and power abuses are on the day’s agenda.

THE TRAGEDY OF TIANANMEN SQUARE [1] IN 1989 returns every year to darken the celebrated success of the reform in China. June 4th is upheld as an essential chronological cue to check the pulse rate of the unequal transformations taking place in the gigantic country.

A register of the last few years, marked by the change of power in the government and in the Communist Party that in 2002 left behind Jiang Zemin’s long mandate, initiated by those events, shows a singular change of direction that, nevertheless, excludes any hint of true democratization or any other similar international parameters.

The fact is that the majority of the problems that led to the state of protest in 1989 not only continue to exist in China today, many have gotten worse.

ON TODAY’S AGENDA: CORRUPTION
The most irritating factor in this situation are the alarming inequalities that affect the different social and territorial sectors, discriminating between those who have easy access to all kinds of goods and services, and those who survive in the most severe of conditions. China’s geography is colored by such marked contrasts.

The seriousness of the situation is such that the government and the Communist Party have found it necessary to insight, beginning in 2006, a clear shift in the regime’s social politics, but the change will take years before showing signs of progress, despite the media’s efforts to try to convince everyone of the contrary.

The corruption and abuses of power are on the day’s agenda and the continuation of political purges and administrative measures, an old and failed formula, don’t seem to look toward the more daring methods, including transparency, for fear of losing control and damaging the sacred stability.

GREATER DILIGENCE WITH THE MAO GUIDEBOOK
What’s changed? The regime has become more diligent and sophisticated, to avoid the risk of a surprise rebellion that would upset order. This has been the main answer to the social tensions that have grown as a consequence of the exacerbated development and of the subsequent disintegration of the social fabric.

The new power figures are easily recognizable: populism, the progressive creation of a superficial democratic image in the exterior, the quest for permanent re-legitimization, etc. However, despite the notable increase of the projection and contracting of China in the rest of the world, the truth is that the sensitivity of the regime, with respect to the concept of democracy, is no greater than it was in 1989, and although a few democratic factions have come together, they are always vastly outnumbered and overpowered by the passed-down handbook of Maoism.

THE HOURGLASS OF CHINESE POLITICS
Hu Jintao is aware of the reform’s dark points, and has thus increased his gestures in other directions, as much on the internal level as on the external, earning time to confront the serious and paradoxical short-comings initiated in the rapid development decades earlier that marginalized all aspects of justice, including the rehabilitation of those penalized in such difficult times.

Hu Jintao won’t be the leader to inaugurate a new political era in China, and his foreseeable victory in the XVIII Congress of the Communist Party of China [2] (CPC), expected next fall, adds a point of veracity to this prediction: in Chinese politics, there won’t be any action until 2020.

Politics in China is moving like sand through an hourglass.