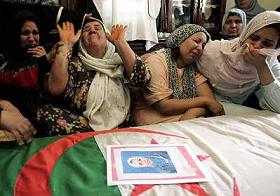 Morán demonstrated how the spectacular growth of Al Qaeda in northern Africa is tied to the social-political weakness of its host countries, and to the non-existence of intergovernmental police cooperation. In Morán‘s opinion, although a common anti-terrorism strategy throughout the Mediterranean would be impossible, progress must be made in bilateral, regional, and bi-regional cooperation.

AL QAEDA, FOUNDED BY OSAMA BIN LADEN IN 1989, has become one of the greatest challenges to global security in less than two decades.

Al Qaeda’s end goal –the implementation of a global caliphate stretching from the far west of Africa to Indonesia– has been successfully adopted by offshoot terrorist organizations like the Salafist Group for Preaching and Combat (SGPC), one of the most active terrorist groups in the Maghreb. In January, the SGPC renamed itself, Al Qaeda of the Islamic Maghreb.

CHAIN OF ATTACKS
After having announced its constitution, Al Qaeda of the Islamic Maghreb found it necessary to expand terror throughout its region of activity. What followed in Morocco –a strategic ally of the United States and thus a target of Al Qaeda– was a nightmare.

Rumors of violence and suicide bombings spread like wildfire. Tuesday, April 10th, four terrorists died in Casablanca. The following day, four car bombs exploded in Algeria, killing 30 and wounding over 200. Al Qaeda of the Islamic Maghreb took responsibility for the attacks. April 14, two Kamikaze brothers burned themselves in the economic capital of the Alauita kingdom, in front of the American consulate.

GOVERNMENT IMPOTENCE
The increasing weight of Al Qaeda in the north of Africa is due to the socio-political weakness of its host countries and the non-existence of international police cooperation. According to expert Walter Laqueur, the situation in Northern Africa is very favorable to Bin Laden’s organization. Terrorism seeks to destabilize societies and demonstrate the impotence of governments, and in the Maghreb it is doing just that.

The attacks have greatly fractured the already divided Algerian society. If in countries with consolidated democracies terrorism is capable of dividing political class and complicating effective antiterrorist strategy, in countries with weak democracies and recent histories of war, the effects are even worse. This is the case with Algeria, which has been incapable of uniting to stop the endemic violence it has suffered over the past 15 years.

BILATERAL COOPERATION
The independent sectors of Algeria criticize the government of Abdelaziz Buteflika for its excessive laxness with Islamic terrorists. Throughout 2006, 2,629 prisoners, convicted of association with terrorist cells, were released. In order to better combat terrorism, the countries of Northern Africa must begin to cooperate. Yet, the road to reconciliation is a long and hard one.

The bad political relations between Morocco and Algeria, due in large part to the conflict in the Sahara, have made cooperation difficult. Collaboration between their respective security services has been virtually inexistent. What little information is communicated is done so indirectly, through French intermediaries.

Yet, the terrorist threat endangers both countries. Morocco and Algeria, aware of their mutual dependence for stability, must learn to set aside their differences and coordinate their police and anti-terrorist forces.

REGIONAL COOPERATION
In less than five years, Al Qaeda created an organization capable of attacking anywhere in the Maghreb, and the countries of the region must follow suit, setting up a uniform defense against terrorist attacks. It is urgent that the governments of the Maghreb create their own version of Europol [1], that is to say, a regional organization that articulates police cooperation and acts directly against Al Qaeda.

BI-REGIONAL COOPERATION
The threat of Bin Laden’s network is growing, with the possibility that it could extend into the countries of southern Europe. The situation is of special worry for Spain, France, and Italy, all countries that are home to thousands of immigrants from the Maghreb. Recent studies on these immigrant populations have produced terrifying results: between 10 and 15 percent of the resident Muslim population in Southern European countries sympathizes with Al Qaeda or its beliefs.

In Spain, the risk of attacks has increased since the most recent call of Bin Laden’s Lieutenant, Al Zawahiri, to launch a jihad against usurped Andalucia.

It is, therefore, key that the European Union build on the antiterrorist cooperation that was begun following the attacks of March 11, 2004. These attacks forced European governments to take the threat of Jihadist terrorism seriously, producing important advances in police cooperation and the fight against radicalization. The passing of time and the diffusion of a sense of threat has diminished cooperation. Yet the current situation should make it impossible to ignore the necessity for a common strategy against terrorism between Europe and the Maghreb.

TO ACT AGAINST THE CAUSES
Yet, the war against terror cannot be won by police force alone. Force is effective in defeating the terrorists that are already active, but it is useless in combating the identification and sympathy that terrorism has engendered throughout the entire world. Over the last five years, thousands of suspects have been detained, hundreds convicted and dozens of terrorist cells dismantled. Yet, Jihadist terrorism continues to grow. The regenerative capability of Al Qaeda has shocked the world. After the detention of a terrorist cell, three more open to take its place. Thus, in order to prevent the proliferation of new cells it is necessary to act against the causes that produce it.

Poverty and fanaticism compel suicide bombers to blow up a bus, or a busy town square. Salafism represents a very attractive philosophy for unemployed Maghreb youth searching for meaning. Work must be done to improve the living conditions of the Maghreb and terminate its conversion into a breeding ground for radical Islamists.

Al Qaeda is a terrorist organization, which uses human beings as its principle weapon. How then, can Al Qaeda be disarmed? We will find the answer in societies that work to promote a brighter future for all citizens.