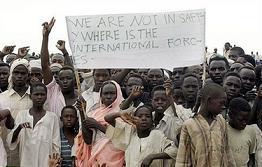 WE WANT NO MORE . That was the whole idea behind the Report on the Responsibility to Protect (R2P) peoples from heinous atrocities, submitted to the world leaders at the beginning of the decade by the Canadian-backed International Commission on Intervention and State Sovereignty [1] (ICISS). The International Commission, made up of prominent scholars and policymakers, intended to provide consensus-oriented answers to the controversial, decade-long debate on humanitarian intervention, namely: if in a modern international order partly based on human rights, is it somehow legitimate to use military force with the purpose of protecting human beings subjected to systematic slaughter, mass rape or forceful displacement by their own states, and if so, under what conditions? To sum up; what are the humanitarian tragedies justifying that the protection of human rights with force trumps the principle of sovereignty, traditional cornerstone of international law, and a means of independence and self-assertion for most developing countries or former colonies?

Why was that question so pressing and how does it continue to be? This is due to the fact that the post-Cold War era has largely been characterized by the prevalence of internal conflicts (civil wars) over old-fashioned inter-state wars and, further, because the human suffering stemming from those conflicts is so appalling that they are now deemed to be threats to international peace and security under the UN Charter.

“Sovereignty can no longer be an excuse for a state to kill its own people for free, and thus the international community has the responsibility to protect“The wilful failure of the international community, embodied in the United Nations, to prevent the genocide of nearly a million people in Rwanda in 1993 or the massacre of 8,000 Bosnians in Sbrenica only two years later provided just some examples of the blatant contradiction of trumpeting human rights´ treaties and institutions while standing idle in the face of desperate calls for intervention where those rights were abhorrently abused. In some other instances, decisive action came at the price of stirring heated disagreements over its legitimacy and true goals; that was the case with NATO´s bombing in Kosovo in 1999, carried out to stop the mass murder of ethnic Albanians by Serb authorities, and to some States, a coup d´état to the world order.

This is, in a nutshell, the background the International Commission had to deal with, back in 2001. Instead of humanitarian intervention, the members of the International Commission wittingly came out with a brand new terminology, the Responsibility to Protect (R2P, as it is usually referred to), and a basic idea, argued for by relevant leaders, such as former UN Secretary General, Kofi Annan: sovereignty can no longer be an excuse for a state to kill its own people for free, and thus the international community has the responsibility to protect peoples subject to gross human rights abuses, which responsibility would include the use of military force in certain circumstances defined as extreme -even against and over the consent of the target state. The Report underlined the need that if such military action proved necessary, it should be carried out within the UN framework as a general rule, so that the said consensus were not put in jeopardy with unilateral interventions.

This basic notion, R2P, has officially become part of the UN agenda and is embedded in several relevant UN documents (true, with different nuances), such as the 2005 World Summit Document. Some talk of an emerging principle under public international law.

THE CONFLICT OF DARFUR: AND YET THERE ARE INDEED MORE RWANDAS

The ongoing conflict in the region of , which started shortly after the launching of the R2P, was meant to be its first real test-case. Most of the UN Security Council resolutions regarding mention this emerging principle within Chapter VII of the UN Charter (which paves the way to the use of force by the Member States to halt situations amounting to a threat to international peace and security, as the first Gulf War). Several individuals -even a high-ranking official of the Sudanese government- have been indicted by the International Criminal Court under charges of war crimes and crimes against humanity. Human rights bodies condemn for human rights violations. The Bush administration, to a large extent, boosted by an impressive grassroots movement, has described the situation in as amounting to genocide (the crucial G word, which implies that something must be done). Hence a hard stance against is rife, which government stands accused of arming the Arab militias, the Janjaweed, responsible for most of the bloodshed.

Furthermore, the conflict has also regional security implications for it threatens to spill over into neighbour and the due to cross-border infighting between armed groups and massive refugee flows –in September the UN Security Council approved the establishment of a mainly European military presence in those regions to guarantee security and the provision of aid.

THE UN-AU MISSION IN DARFUR

So, it is no wonder then that some hope was pinned on UN Security Council resolution 1769, of July 31st, which authorized the establishment of the so-called hybrid United Nations and African Union peacekeeping operation in . Termed UNAMID [2], the mission will take over the beleaguered African Union troops currently in Darfur, and will entail the deployment of some 26,000 peacekeeping troops, the largest peacekeeping force in the world -a deployment which had been repeatedly stalled by . This mission will be entrusted with the task of supporting the tethering peace process between government and rebels and the protection of civilians.

Notwithstanding, some critics point out that the Security Council resolution was significantly watered down by the Sudanese government and that the UN-AU mission will therefore have a very weak mandate to protect civilians with the use of force –which is the real point at stake. Already two months through, many states, the Europeans in particular, are reluctant to contribute troops to such a risky mission in a parched region the size of . The mission, for the sake of political correctness, must further be predominantly African in order to assuage fears that it is a purely Western endeavour. Not surprisingly, General Agwai, who is in charge of the operation, has reckoned that expectations might be too high. All being well and if it manages to overcome very serious logistic problems (of coordination, resources, etc), UNAMID will assume authority later this year.

“International security begins with the determinate protection of peoples from large-scale human rights violations“ Probably, Darfur (and other ravaged areas of Africa as well) is to some extent paying the toll of the debacle, wrongly ex-post facto justified as a humanitarian intervention to oust a dictator responsible for massacres against the Kurds in the 80´s. These are some of the collateral damages of the War on Terrorism, for any costly deployment of troops in a Muslim country is perceived as something short of an invasion (in this respect, Al Qaeda has already threatened terrorist actions against the international forces and the States contributing to them).

The use of force to stop conscience-shocking situations, true, raises a number of difficult questions of legal, political and moral nature, nor cannot address post-conflict management issues. Nonetheless and while admitting that this is therefore a hard topic, in cases such as Darfur, I believe that force must be used to make good our human rights commitments, otherwise dead letter. We may call this principle humanitarian intervention, a responsibility to protect or a principle of limited intervention, as some other scholars have named it –for example, Fátima Aburto´s interesting article for Safe Democracy Foundation mentions a “moral obligation to protect” along the same lines.

To conclude, whatever the terms, the basic normative idea remains the same: international security begins with the determinate protection of peoples from large-scale human rights violations. As tragic past experiences have shown, in that protection will require:

1) significant contributions of combat-capable units from Western countries, for, and as Al-Qaeda’s repugnant warning shows, our own security is on the table too;

2) the UN-AU peacekeepers should be allowed to employ force beyond self-defence.

That is the ultimate mandate of UNAMID, no matter how hard has tried to weaken it. Let us hope that does not add up to the long list of shameful names for the international community.