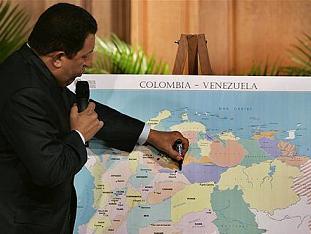 A particular political, diplomatic and legal phenomenon can be observed in relation to the drama of the kidnappings in : the matter has gone international. The question is whether this fact complicates or simplifies the liberation of those kidnapped, including those in the present as well as the future, those in and those that are held captive throughout the entire world.

(From ) AT THE ROOT OF THE INTERNATIONALIZATION of the kidnapping drama in Colombia, which is shown by Hugo Chavez [1]’s failed and revived mediation, by the intervention on Nicolas Sarkozy [2]’s part, by Daniel Ortega [3]’s declarations, by the president of Argentina, Cristina Fernandez de Kirchner [4], by the Church’s mediation, etcetera, a fortuitous fact can be found. This would be the dual nationality of Ingrid Betancourt [5], who aside from being Colombian is also French. Aside from this, there is also a well-known fact: Hugo Chavez’s unmistakable influence over the Colombian guerrilla.

A FORTUITOUS FACT, A WELL-KNOWN FACT

The first is, as we say, a fortuitous fact. Ingrid Betancourt was neither kidnapped nor detained for being French, which was not known in . She was detained because she voluntary threw herself into the wolf’s mouth in the middle of her conviction’s campaign for the presidency of the , which she was participating in as a citizen with full rights. “Fernando Araujo, kidnapped for 5 years by the FARC, saw how the eyes of the guerrilla members would light up when they talked about Chavez; he embodies the values that they would like to defend” Her other nationality, French, was highlighted by her family, who by doing so was looking to protect her by making her look more valuable; so valuable, that they will set her free last.

Her family was also opposed to a rescue operation when Colombian intelligence work managed to locate her. They preferred the uncertainty of her captivity, now prolonged for almost six years, to the risk of her death. And now in almost all of the mayors’ offices in France her picture has become a part of daily life and a stimulus for the generosity of the French who demand that they return Ingrid, a vague demand which they don’t know if they should direct at the FARC [6] or Uribe [7]’s government, which does not negotiate with guerrillas that are considered to be terrorist organizations.

“Uribe, who does not cede anything in regards to the democratic security, carries the greatest amount of fondness with him” It is a well-known fact that Chavez is admired by the FARC guerrilla, and it is not his fault. The Colombian Secretary of Foreign Policy, Fernando Araujo, who was kidnapped for five years by the FARC, confirmed that he saw how the eyes of the guerrilla members would light up when they talked about Chavez, perhaps because he embodies the values that they would like to defend. He wanted to take advantage of this influence, but, as it is not easy to keep the genie inside a bottle, the intervention became a means for Bolivarian resonance, and, even against their will, made those kidnapped into a means of serving Chavez’s politics.

In any case, in view of his prestige, the formal titles that Bogotá’s government could confer upon him value little. And we see the spectacle of a caudillo who, like a demigod, is seen offering the kidnappers’ freedom as if it were like offering a bull in a bullfight, as compensation for the mistreatment of Bogotá, which withdrew its intervention. Good pragmatism will say that if the liberation of those who are kidnapped is achieved like this, Chavez’s good doings are welcome.

THE SENSE IN MEDIATION

Speaking of pragmatism, the positions concerning how to free those kidnapped question the principles and interests of multiple players. Ingrid, from her captivity, writes a letter that cannot help but be moving for its humanity and the grandeur of its spirit. “International participation confuses more than it simplifies and removes obstacles. But it can make sense” Remember that, regarding politics, acts more on its principles than on its interests. And if we are to label actions as showing greater or lesser fondness for principles, the greatest amount of fondness is carried by Uribe, who does not cede anything in regards to the democratic security that he claims has saved hundreds of families in the drama of suffering a kidnapping. And the most fondness for interests belongs to the FARC. Interests without any principles whatsoever.

On the other hand, neither the pure and hard calculation nor interest can be found in Chavez or France. The generosity is there, but it does not seem to be of priority to them to demand principles from the guerrilla, or respect for the dignity of human beings, for the rules of war, for the rules against terrorism and for the fundamental rules of humanity. There are signs of condescendence and familiarity. And do not even talk about Daniel Ortega calling Tirofijo [8], the chief of FARC, which is a terrorist organization like ETA [9], a brother, two days after the International Court of Justice’s ruling that was unfavorable to Nicaragua’s aims regarding the borders of the Caribbean that it shares and disputes with Colombia.

“Could the theory of responsibility to protect and the humanitarian interference justify the international community’s intervention in ?” In that sticky environment, international participation confuses more than it simplifies and removes obstacles. But it can make sense. It confuses because, typical of all forms of hostage-taking, the object of the blackmailing is Colombia, since, for example, they are not asking that prisoners of French jails be freed, or that that Venezuela’s oil be privatized. As such, these countries would not be able to do anything different than serving as loudspeakers to the guerrilla.

But, if we consider that what the FARC is looking for is impunity and internal or external recognition, and from there its demand for dialog and for humanitarian agreement with an international presence, the international card has merit. There is the failed blackmailing of the Colombian society, which elected and reelected Uribe and his policy of democratic security, but also the pressure, subtle but sound, that is exercised by FARC over international players to whom the kidnappers are being offered in exchange for recognition.

That is the way out of that savagery, if there indeed really is some fitting way out of this use of savagery to obtain recognition.

From this angle, could the theory of responsibility to protect and the humanitarian interference justify the international community’s intervention in , an argument that some make? “Who would not be happy after the liberation of Clarita and Emmanuel and Consuelo and, hopefully, of the other seven hundred detainees that the FARC has?” It does not seem like it. The intervention has its limits, since it can never be a means of leaving the Colombian society unprotected, and at the same time also the nationals of the countries that intervene, who will be coveted for kidnappings with the goal of obtaining foreign diplomatic pressure and, just like that, the liberation of its pairs.

The firm demand to confront terrorism is also a manifestation of the responsibility to protect. To protect men from all over the world, today and tomorrow.

In view of the imminent liberations, who would not be happy upon hearing the news that they have set a kidnapped person free? Who would not be happy after the liberation of Clarita and Emmanuel and Consuelo and, hopefully, of the other seven hundred detainees that the FARC has? But to go from there and call it a noble manifestation or a manifestation of justice and generosity, deserving of gratitude, is an error.

Only the calculation and interest of the FARC explains it. It would be like thanking Herodes for having set a limit to the massacre of innocent people.