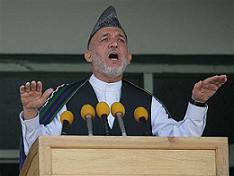 This is not the first time that the Afghan president Hamid Karzai has offered to engage in dialogue with the Taliban, even if it is the first time that support has been shown from the and the rest of the international coalition, as well as the Taliban response. In other words: this is the first negotiation, but with conditions (control of the southern provinces, a timetable for the exit of international troops and the liberation of all prisoners). Why is Karzai’s offer being put forth now when the violence is growing and the Taliban control nearly half of ?

IN THE LAST FEW MONTHS, the contact between the government of and the commanders of the Taliban insurgence has intensified, as the Afghan president, Hamid Karzai [1], has recently recognized.

During the end of September 2007, Karzai invited the Taliban to negotiate, and he even showed himself to be open to sharing the executive power, in exchange for a cessation of the attacks. “If 2006 was an annus horribilis because of the level of violence, 2007 broke all of the records” This is not the first time that the Afghan president has offered to engage in dialog with the Taliban; what is new is that the Taliban have responded to the offer, albeit with conditions: control of the ten southern provinces, a timetable for the exit of international troops and the liberation of all the Taliban prisoners within a period of six months.

In spite of the fact that this offer is, for the moment, nothing more than the expression of a desire, and as with all negotiation, a long and uncertain path has opened up, the proposal reveals some surprising aspects, such as the fact that it has the support of the international community (the United Nations has already offered to mediate such negotiations) or at least its consent, as the case is with the United States. The British and German governments have also repeatedly cried that a negotiation with the insurgence is the only way to overcome the conflict.

WORSE THAN AN ANNUS HORRIBILIS

Insurgence activity has not stopped growing exponentially since 2005. If 2006 was an annus horribilis because of the level of violence, 2007 broke all of the records. According to the Secretary General of the United Nations’ latest report on country’s situation, terrorist attacks have increased by 20 percent in 2007. “there are four possible scenarios that can provide us with some clues concerning what sense there is in the Afghan president’s offer”

The Senlis Council [2] think tank has also raised a voice of alarm. In a recent report (Stumbling into Chaos: Afghanistan on the brink. Senlis Council, November 2007 [3]) it maintained that the Afghan conflict had reached crisis proportions, and stated that the Taliban is already present in 54 percent of the country. Another analysis estimates that the international troops only control 20 percent of the southern provinces, while insurgent activity is extended throughout the entire country and combat is found less than an hour from .

Without a doubt, the possibility of negotiating with the Taliban encapsulates a good number of questions that are worth clearing up before embarking on such a dialog, such as outlining its terms well. The first question that arises is why the offer is being put forward at this moment, when the insurgence is generating the highest levels of violence since the Taliban regime was overthrown [an average of 550 explosive artifacts every month and 130 suicide attacks so far this year (editor’s note: this article was written towards the end of 2007)].

Although there is still no clear answer to the question, four possible scenarios exist that can provide us with some clues concerning what sense there is in the Afghan president’s offer.

Karzai’s announcement could be a mere new version of anterior peace offers, like the national reconciliation plan presented in December 2006 that contained an invitation for the insurgents to renounce violence and integrate into civil life. The plan, however, has shown scant results so far, with some hundreds having reintegrated, among whom there are very few from the High Command.

“The United States, which supported the Northern Alliance in its overthrow of the Taliban could now change its preferences and back an arrangement between Pashtuns” A second scenario is that this is really an offer to demoralize the opponents, create controversy among the commanders and blow up the insurgent movement from the inside. The British are currently engaging in dialog with several Taliban commanders that are stationed in to achieve local deals, as they did last year in the Musa Qala district, which collapsed a few months ago.

A third option is that this is actually an emergency measure to attempt to contain a hopeless situation, with no way out, and could be interpreted as the response of a government harassed by various sides; from within the system with the creation of a new opposition party, the National Front, that even includes members of its own government, and from non-legal means, by the insurgent groups. In accordance with this scenario, Karzai would be looking for a way out of the emergency after already making sure that his international partners are not capable of defeating the insurgency via the military route.

The fourth scenario is, if possible, even more unsettling. As the professor Barnett Rubin puts forth in a recent article (The situation in Afghanistan and its implications for international peace and security, A report by the Secretary General, United Nations, September 2007, A/62/345-S/2007/555), the negotiations offer would be equivalent to a return to politics dominated by the ethnic mandate: this would be a plan, supported by Pakistan, to form a Pashtun alliance (Karzai, as well as a great portion of the Taliban movement, belongs to this ethnicity) with the objective of putting the Northern Alliance, the majority of which is not Pashtun, and which currently enjoys a good deal of the power, into a corner.

The , which supported the Northern Alliance in its overthrow of the Taliban (together with other countries, like ) could now change its preferences and back an arrangement between Pashtuns. In its confrontation with , such a step would leave the Persian country without the ally that it has today in Karzai’s government. In this scenario, it is surprising that one of the most emblematic leaders of the non-Pashtun groups, Jalahudin Rabbani, supported the offer of negotiation with the Taliban, as he expressed during the Jirga held amongst representatives of and last August.

A WEAKENING OF THE INTERNATIONAL COALITION

Karzai’s offer is being proposed in a moment during which the international coalition’s unity of action is beginning to weaken; the continuity and the character of the military mission will be subject to a vote in Western parliaments in the upcoming months. “The negotiation and the transfer of responsibility of security matters to the Afghans constitute in themselves valid options for the construction of peace in the country” This is the case with and the , key players in the containment of the Taliban within the southern provinces. Other countries with lesser contributions ( and ) have already withdrawn their military troops in .

Although military in character, the Atlantic Alliance has become the only forum which brings together the members of the international coalition and the only setting where the political aspects of the operation are discussed. In view of the evolution of the events (as much in as in their respective countries), NATO currently finds itself pressured to find quick solutions, before a failure that would hurt its credibility takes place. The offer to negotiate with the Taliban could be interpreted within this context. The exit plan is completed with the formation of local security forces and the transfer of responsibility to the police and the Afghan army.

The negotiation and the transfer of responsibility of security matters to the Afghans constitute in themselves valid options for the construction of peace in the country. However, it is worth remembering that at the beginning of the operation, deadlines and objectives that were too optimistic were set, and they have turned out to be unrealizable. Haste and improvisation did not work then and they will not help fix the situation.