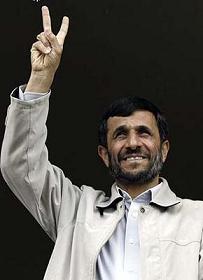 The author argues that far from being isolated, is embedded in myriad political and economic relations with global outreach. Sanctioning is thus a futile strategy and needs to be substituted with a systematic effort to establish diplomatic relations between the and , once the belligerent Bush and Ahmadinejad administrations leave office.


(From London) DO FACTS MATTER IN INTERNATIONAL RELATIONS? One day after the latest National Intelligence Estimate (NIE) [1] established with high confidence that is not developing nuclear weapons, President Bush stepped in front of the cameras to declare that the NIE makes it clear that needs to be taken seriously as a threat to peace. Politics function here as a reality-producing device; it takes one particular truth condition ( is not developing nuclear weapons) and transforms it into another ( continues to be a threat to world order), one that is more amendable to the particular political agenda pursued. In this case, that implies presenting as dangerous, isolated, irrational and a threat to international peace.

“If you believe the argument that is isolated then you are misinformed” Whenever facts are presented that counter this narrative, they are immediately manipulated in order to serve the higher cause, which is to ostracise the country. You do not need years of study or training in order to be able to see that mechanism at work. In fact, you can discern that mechanism whenever a country that is not under the command of the government is analysed under a more objective microscope.

This brings us to another question: can the neutral observer of world politics inform him or herself about what is and what the country is not if he or she is solely dependent on the mainstream international media?

If you believe the argument that is isolated, that the country is perceived to be acting against the will of the international community, and that the majority of peoples feel threatened by it, then you are misinformed. “the Iranian state does not seem to find it difficult to strike multibillion dollar deals” Unless of course, we define the international community as an exclusively Western club of rich (mostly white) nations, there is no convincing empirical evidence to suggest that is isolated.

The Non-Aligned-Movement [2] () comprising 118 countries, the Organisation of the Islamic Conference (OIC) with 56 members and a range of other smaller inter-governmental organisations have repeatedly supported ’s case to pursue a peaceful nuclear energy programme. In addition, as an antiwar activist one has to be very pleased about the support for amongst the global anti-war movement, from the Stop the War Coalition [3] and the Campaign Against Sanction and Military Intervention in Iran [4] (CASMII), to the Human Shield Movement [5]. In fact, in terms of the quality of the argument and the quantity of people opposing aggression against , it is the Bush Administration, along with the new breed of rightwing leaders in , such as Nicolas Sarkozy and Angela Merkel (differences notwithstanding), who are isolated.

True, the comprehensive sanctions regime enforced by the United States has made it harder to do business in Iran; that is especially the case for the average Iranian who is dependent on the banking system and does not have the capital to move beyond the national confines by establishing, for instance, subsidiaries overseas, which is exactly what larger Iranian companies are doing to circumvent the sanctions. “Even under Merkel, ostensibly a strong supporter of the Moreover, the Iranian state does not seem to find it difficult to strike multibillion dollar deals. In the past year alone, has signed a contract worth more than €1,5 billion with ’s national petroleum and petrochemical companies to develop up and downstream oil projects and to upgrade an existing field. ’s Sinopec has a €1.3 billion deal to upgrade ‘s refinery and other deals worth over €35 billion to develop the Yadavaran gas field and Gamsar oil block.

A quick perusal of recent agreements signed by Iranian companies in other sectors of the country’s economy reveals a comparable picture: Huawei [6], China’s largest telecommunications-equipment company, signed a deal with Irancell [7], Iran’s main mobile-phone operator to expand network coverage; Russia negotiated the sale of 30 Tupolev [8] commercial airplanes to Iran for €700 million; Chinese carmaker Chery [9] entered into a €180 million joint venture with Iran Khodro [10], the country’s largest car manufacturer; the Saudi based Zenel company struck a deal with Iran’s Power Generation, Transmission and Distribution Company worth €300 million; Turkey signed an agreement foreseeing the joint construction of three thermal power plants (two in Iran and one in Turkey) with a capacity of 2,000 megawatts each, as well as several hydroelectric plants in Iran with a total capacity of 10,000 megawatts; and Russia delivered the first shipment of enriched-uranium fuel rods to the nuclear power plant at Bushehr in southern Iran.

Even under Merkel, ostensibly a strong supporter of the sanctions regime, could not resist the Iranian market; the German Office for Foreign Trade indicated this month that although German exports to have dropped, imports from have risen almost 50 per cent to reach €580 million.

The so-called political isolation of is a myth. Between September and December 2007, the country hosted the second Asian Parliamentary Assembly, which brought together delegates from 39 Asian countries, the NAM Conference on Human Rights and Cultural Diversity which supported Iran’s proposal to establish a human rights and cultural centre in Tehran, and a summit meeting of the littoral states of the Caspian Sea that was attended by Vladimir Putin, who signed an agreement supporting Iran’s right to nuclear energy. “Both Bush and Ahmadinejad have built their political careers on the basis of an us-versus-them dichotomy” Moreover, within the same period Ahmadinejad made the pledge to further extend Iran’s multibillion dollar investments in Bolivia, Ecuador and Venezuela on a tour of the South American countries. He also became both the first Iranian President to attend the annual summit of the Gulf Cooperation Council [11] (GCC), which brings together the monarchies of the Arabian Peninsula, and the first Iranian President to perform the hajj [12] on invitation from ’s King Abdullah.

From a geo-strategic perspective then, ’s foreign policy orbit is not confined to the and . But this has been a conscious decision implemented systematically after the Iranian revolution of 1979, rather than an outcome of sanctions or a product of Western policies towards the country.

ARE ALL OPTIONS ON THE TABLE?

Given that the realities on the ground supersede the strategic calculus of the anti-Iranian lobby, sanctioning is a futile endeavour. The policy of confrontation merely serves the political agenda of the crisis-ridden neo-conservative minority on both sides.

Both Iranian and American neo-conservatives can only function within the context of conflict. Both Bush and Ahmadinejad have built their political careers on the basis of an us-versus-them dichotomy, which the multitude opposes. In order to pave the way towards rationalising the relationship between the two countries once both leaders leave office, the phrase all options are on the table should be reinterpreted to mean that there will be a systematic effort to establish diplomatic relations. The ongoing talks concerning the security of are a step in the right direction. Inflating the recent encounter between the Iranian Revolutionary Guard’s speedboat patrols and the US Navy is not.

I have repeatedly argued [13] that Iran’s shift away from the utopian-romantic foreign policy culture during the first decade after the Islamic revolution of 1979 has yielded to a form of utopian-realism, which continues to guide the country’s foreign policy elites towards advocating a rather more equitable world order, but less raucous methods to achieve that goal. Within that modified political culture, that supersedes the rhetoric of Ahmadinejad; all options are on the table, even détente with via the anti-Zionist factions within the country. Wouldn’t it be wasteful and archaic to disregard these realities of contemporary and to continue to believe in the policy of economic sanctions and pre-emptive aggression?