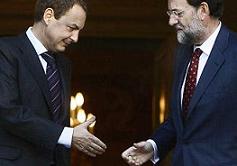 The electoral battle between president José Luis Rodríguez Zapatero (PSOE) and opposition leader Mariano Rajoy (Partido Popular) is intensifying. The foreseeable economic slowdown in 2008, the rise in prices, the growth of the foreign deficit, and the slump in the real-estate sector signal the end of a cycle and show competitiveness problems. The second big topic is the antiterrorist fight: despite not going through a good period (thanks to political and judicial action), it would not be unlikely for ETA to carry out terrorist acts before the elections.

(From ) 2008 IS AN ELECTION YEAR in several European and American countries. In particular, in the countdown to the end of José Luis Rodríguez Zapatero [1]’s government’s first term has just begun.

Elections will be held in seven weeks (March 9), and the extreme political confrontation between the two main political parties, the Socialist Party (PSOE [2] in its Spanish initials) and the People’s Party (PP [3]), that has marked this term, will turn into an electoral battle. Or perhaps it would be more correct to state that the electoral battle, which has been considered to be an imminent event during the past four years, will intensify in the upcoming weeks.

“The marginalization of the PP leader with the most clout, Ruiz-Gallardón, is some of the best news that the PSOE could ever receive” A tough struggle for the vote is being forecasted because, unlike the electoral campaign of 2004, whose opinion polls projected the winner to be the PP, which was in power at the time, at this point the polls show a very tight race; technically, it is even tied. With this in mind, it is probable that neither party will achieve a majority that would allow them to rule by themselves.

The March 11 terrorist attack [4], carried out by a jihadist group three days prior to the 2004 elections, changed the anticipated results. In the current situation, it appears that the electoral campaign itself and the two face-to-face debates in which candidates Zapatero and Mariano Rajoy [5] will engage on television will be of utmost importance, barring any future events.

Even so, an event has already occurred: the exclusion of the mayor of , Alberto Ruiz Gallardón [6], from the PP’s list, which was the doing of the capital. The marginalization of the PP leader with the most clout (the most highly valued politician) is some of the best news that the PSOE could ever receive. This decision, which was made by the party that Rajoy leads, will entail grave consequence and affect the electoral result.

THE GOOD ECONOMIC COURSE… AND ITS WEAK POINTS

Even though the electoral campaign officially begins on February 22, the two big parties have already made it clear that the economy is one of the main issues. The global economic slump that affects the world’s dominant countries, and as such affects Spain, the eighth global power, will be one of the Trojan horses that the next government will have to know how to ride (manage).

“Aside from the failure of the dialog process initiated following the ceasefire (March 2006), this term has been characterized by the police’s efficiency in combating the organization and the failure of the organization’s terrorist plans” The economy is always a key issue in electoral campaigns, but its importance multiplies for the opposition parties when economic indicators are not promising. Even though the average forecast for the Spanish economy’s growth in 2008 anticipates rates superior to those of the European zone (around 2.5 percent) the prices, above all of some foodstuffs, have shot up, and at the same time the foreign deficit is one of the highest in the world and the stock market is showing bad numbers, with international liquidation problems. Here are some data that will explain a decrease in growth and consumption.

The fall of the real-estate sector, which was detected during the last few months, is having detrimental effects on employment. once again has the third highest amount of unemployment out of all of the members of the Organization for Economic Co-operation and Development [7]. The number of housings in construction, and the sales figures, have diminished. Even so, the unemployment rate, hovering around 8,5 percent, remains at a historic low.

“It would be difficult for the future president to engage in a process of dialog with a truce with ETA as a starting point; they have ceased to be credible” The other problem is a very significant spike in the rate of inflation, in large part due to the continuous increase in the price of oil, evident in all of Europe, but above all in Spain.

All of this data allows the PP candidate, Mariano Rajoy, to deny that is in the champions league of the European economy and to make the economy’s course the main reason for taking votes away from José Luis Rodríguez Zapatero.

The other big issue of the electoral debate, which on the other hand is already a classic in Spanish politics, is the antiterrorist fight. Aside from the failure of the dialog process initiated with ETA [8]’s ceasefire (March 2006), this term has been characterized by the police’s efficiency in combating the organization, and the failure of ETA’s terrorist plans.

“The latest news suggests that the Attorney General will demand that the ANV be illegalized by invoking the Party Law” As the term comes to an end, ETA is incapable of fulfilling its death threats because of the police’s competence in thwarting their plans, with the resounding exceptions of the attack on Terminal 4 of the Barajas airport, which claimed the lives of two Ecuadorian citizens, and the assassination of 2 police officers in France.

The last antiterrorist operation, in January 2008, dismantled the special unit Elurra (snow, in the Basque language), which was supposedly behind the Barajas airport attack, while it was preparing to kill. Even so, everything suggests that ETA will attempt to affect the electoral campaign and carry out an attack between now and March 9.

Besides, ETA squandered what was probably the last possibility of negotiating with any government. It would be difficult for the future president to engage in a process of dialog with a truce or ceasefire as a starting point, simply because these types of announcements have ceased to be credible.

“The Pact of Ajuria Enea put forth to the citizens the idea that as long as terrorism persisted, all of the democratic parties would be on the same side” And it is also an awful term for ETA’s entourage because the judicial circle is closing in on the radical Basque organizations that the illegal Batasuna [9], a political arm of ETA, publicly supports: the Communist Party of Basque Lands (PCTV in its Spanish initials), and Basque Nationalist Action (ANV [10]). Nothing has kept ANV, which is taking no notice of calls for its illegalization, from presenting a list of its leaders of the three and Navarra to the Congress of Deputies. The most probable case is that these candidates will become useless: the latest news suggests that the Attorney General will demand that the ANV be illegalized by invoking the Party Law. Said law, passed in 2002, established that any political organization will be illegalized when it systematically infringes upon fundamental liberties and rights, promoting, justifying, or exonerating attacks on life or on the integrity of people… The ANV as well as the PCTV refuse to condemn ETA’s attacks; as such, all indications suggest that they are on the verge of being illegalized.

THE ANTITERRORIST FIGHT SHOULD BE OUTSIDE OF COMBAT

But it is during the electoral campaign, a period that lends itself to promises, when the two important Spanish parties should commit themselves to eliminating the antiterrorist fight from the electoral battle.

In matters such as this one, the sense of the State should come before the interests of the party, as already happened twenty years ago. In 1988, the leaders of all of the Basque democratic parties signed the first big agreement against ETA: The Pact of Ajuria Enea, which was broken years afterwards. Said pact put forth to the citizens the idea that as long as terrorism persisted, all of the democratic parties would be on the same side.

Politics is the art of the impossible, since that is precisely what is asked of the politicians, for them to make what is necessary possible: consensus in the fight against terrorism.

A consensus that puts an end to ETA’s utilization of predatory politics.