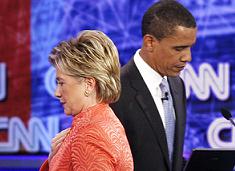 With Super Tuesday just around the corner, the author addresses the heated battle for the Democratic presidential primaries and the appropriateness of Bill Clinton’s role in advocating for his wife’s candidacy. The Bill and Hillary tag team, now popularly referred to as Billary, has been blatantly divisive, created unprecedented tensions within the party, and may potentially rally Republicans to a November victory. These aforementioned factors along with Obama’s positive message of change and hope have earned Obama the endorsement of Edward Kennedy and other senior Democrats.

IN A TELEVISED DEBATE in , Barack Obama, in referring to former president Bill Clinton’s ferocious and unprecedented attacks, told Hillary Clinton that he did not always know whether he was up against her or her husband. The disruptive omnipresence of Bill Clinton playing bad cop to Hillary’s good cop has been one of the most disturbing aspects of these unique and heated Democrat primaries.

Not only are these primaries unique in that they offer the first viable African American and female candidates in history “In Nevada, Bill tells the press and voters a tall tale about possible Obama campaign irregularities that are impossible to either prove or refute” (not mentioning the possible return of the former first family to the White House in switched roles), the two ’s have implemented harsh and drastic campaign tactics that are normally only reserved for the general elections. Bill Clinton’s often shameless attacks and divisiveness, use of half-truths and deliberate falsifications about Obama’s persona and record have spurned the rebuke of political commentators and the rank and file of the Democrat party.

John Kerry [1], the 2004 Democrat candidate for president, denounced ’s disgusting lies and distortions, while Tom Daschle [2], the Democrat’s former Senate majority leader, said that Bill’s behavior was not keeping with the image of a former president.

“there is a general consensus amongst senior Democrats and the pundits that Bill and Hillary have been playing the infamous race card to Obama’s detriment” Americans have a special relationship with their presidency. Americans and their politicians on both sides of the table can disagree with their president on policy and other issues but will always support and honor the figure of the president out of respect for the institution of the presidency. As a result, when a president’s mandate reaches it finale, the president is converted into an ex-president with all that the new mandate entails. Ex-presidents are honored as elder statesmen, as having served their country, and are bestowed with the enduring title of President.

Yet in the present elections, we have seen some of these traditional notions change. Bill has acted more like James Carville [3], the Ragin’ Cajun, than like a dignified statesman. Bill has been seen screaming unsparingly at political rallies. He insults and demeans his fellow Democrat Obama. In , Bill tells the press and voters a tall tale about possible Obama campaign irregularities that are impossible to either prove or refute. And he does this as the former president of the .

As Eugene Robinson [4] of the Washington Post writes, Forget about the statesman who uses appropriately measured language when talking about transient political events … That Bill Clinton has left the building. Meanwhile, the just called him the Reduced Bill [5].

In particular, there is a general consensus amongst senior Democrats [6] and the pundits that Bill and Hillary have been playing the infamous race card to Obama’s detriment. There is little doubt of the reasoning behind Hillary’s comments regarding Dr. Martin Luther King, Jr. and President Johnson, and then about Bill’s belittling of Obama’s candidacy as a mere fairy tale. The general rationale, as expressed by ’s former spinster Dick Morris [7], was to convince white voters that Obama’s win in was due to him being a black candidate rather than a candidate that happened to be black.

After Obama prevailed in almost doubling the number of votes that Hillary received, Bill Clinton dismissed Obama’s achievement by saying that even Jesse Jackson [8] had also once won a primary in . This is precisely the type of shameless mud-dragging and attempt at turning Obama into some radical, militant candidate that is shocking so many members of the Democratic Party.

“Caroline Kennedy has recently endorsed Obama’s candidacy saying that Obama inspires her and Americans in a way like that no other politician since her father, former president Kennedy” By turning the primaries into a war of false accusations and mud slinging, many Americans are having a nightmarish flashback of the culture wars of the 90s, the triangulation, special counsel intrigue, countless corruption scandals, questionable friends and deals, presidential personal lives, and so on. Bill’s lack of decorum and unprecedented zeal on the campaign trail have also reminded Americans of the Clinton’s aura of entitlement, ambition, and that they are willing to stop at nothing to get elected. It is even ironic and telling to watch the same duo that used to whine so vehemently about the politics of personal destruction now become so destructive and ruthless toward the young and positive Obama.

Not only is it offensive to watch the practiced and experienced statesman and former president try to clip Obama’s wings at every corner, it is even more disrespectful to the hundreds of thousands of Obama followers who are so enthusiastically supporting his candidacy and turning out in record numbers to vote in the primaries. What happened to that Obama-like Bill Clinton of 1992, young, fresh, and hopeful?

The is at a difficult cornerstone where the possibility of alternating dynasties and revolving presidencies could lead to a dangerous pattern. Because the primaries require a certain degree party loyalty, suspiciously absent in the playbook, Obama is impeded from raising the fundamental question about the state of the democracy when the role call of four consecutive presidents could potentially be Bush Clinton Bush Clinton. “Obama has brought together Americans in a new and exciting way with energy, enthusiasm, and hope”

Caroline Kennedy [9] has recently endorsed Obama’s candidacy saying that Obama inspires her and Americans in a way like that no other politician since her father, former president Kennedy. Even more importantly, Edward Kennedy [10], the second most senior Democrat in the Senate has now also backed Obama. His forty years of experience in the Senate and support for Obama as the best candidate to be the next president are a slap in the face of Hillary’s experience claim. Furthermore, his endorsement, considered to be the most important [11] of all national politicians, gives Obama the kind of heavy weight credibility he needs to hold his own against the two ’s.

THE YEAR OF THE DEMOCRATS AT RISK

With George W. Bush’s presidency universally unpopular amongst Americans and without a natural Republican successor, the Democrats should be in the perfect position to take the White House. Nevertheless, while Bill is red-faced and pointing his finger at Obama, the Republican candidate, Senator John McCain, is leading in the national polls against Hillary. Bill’s antics and divisiveness is bad for the Democratic Party. According to Daschle, Ultimately it’s going to divide us, and it’s going to have a lasting effect down the road. As Frank Rich [12] says in the New York Times, Bill Clinton can be the miracle that Republicans were looking for to retain the White House.

One thing is for sure: George W. Bush will no longer be president after these elections. And in a Change Election, Obama has brought together Americans in a new and exciting way with energy, enthusiasm, and hope. His South Carolina victory speech [13] was one of the most moving political speeches in recent memory. Unfortunately, Obama is faced with Billary’s sense of entitlement and anything goes tactics. The Super Tuesday is coming, and it already looks like Hillary will ask Bill to play second fiddle and keep quiet. As indicates, she is a much stronger candidate on her own. The question now is whether the ’s will play fair and let Obama’s hope have its rightful shot.

In the words of Edward Kennedy, It time again for a new generation of leadership. It is time now for Barack Obama.