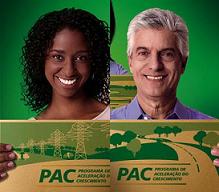 , just like other emerging countries, is experiencing an shortage of infrastructure, which is hindering its economic growth. For this reason, President Lula’s government launched the Growth Acceleration Plan (PAC [1] in its Portuguese initials) exactly one year ago: a four year, 190 billion euro investment plan that hopes to achieve the goal of a GDP economic growth rate of 5 percent between 2007 and 2010.

(From Sao Paolo) EXACTLY ONE YEAR AGO, (January 28, 2007) the Brazilian government launched an ambitious economic plan called The Growth Acceleration Plan and known as What is the PAC? What is its importance, and what are its effects? What is its current state?

The PAC is an economic program, the base of which is an aggressive plan for investment in infrastructure, which, together with economic measures such as credit stimulation, the creation of an adequate regulatory framework in the environmental sphere, and the tax burden decrease for sectors that are considered vital (such as capital goods, civil construction, semiconductors and computers) hopes to reach a goal of a 5 percent GDP economic growth rate between 2007 and 2010.

Where will these funds come from? State-run businesses (mainly Petrobras [2]) will pay for 43 percent of these investments, the private sector (through public-private associations) will finance another 43 percent and the State, through the national budget, will be responsible for the remaining 14 percent.

THE RETURN OF THE STATE

, like other emerging countries, is facing the limit that insufficient infrastructure imposes on economic growth. The PAC signals the return of the State’s role in strategic planning and in the definition of priorities on the agenda for growth in the upcoming years. This is not the first Brazilian strategic plan, as the country has a historical tradition in the matter, as the successive plans implemented from 1947 all the way to ex-President Fernando Enrique Cardoso [3]’s Brazil is advancing plan of 2000 can attest to.

“Without highways, ports, hydroelectric power stations, gas pipelines, and transportation it is impossible to even dream of sustainable growth” Without a doubt, the most audacious one was ex-President Juscelino Kubitschek [4]’s 50 years in 5 plan, which culminated in the construction of Brasilia.

Excluding megalomania and sensationalist announcements with political promotion aims, the PAC puts in the center of discussion a question that is fundamental for a country that is aspiring to grow and become a heavyweight player in the global economy right. After two decades of stagnation, overcoming the hold-up is essential. Without highways, ports, hydroelectric power stations, gas pipelines, and transportation it is impossible to even dream of sustainable growth. From a macroeconomics perspective, the investments proposed by the actually kill two birds with one stone. On the one hand, they would eliminate the bottlenecks, or limitations of the infrastructure, and on the other hand the investment level would increase from the insufficient 18 percent of the current GDP to a level compatible with a 5 percent annual product growth rate.

However, as per the last PAC balance carried out by the federal government, some causes for concern have arisen, since the numbers indicate that only 55 percent of the value of the guaranteed budget that was destined to go to the PAC in 2007 has been utilized, generating criticism of the program’s sluggish implementation.

Another matter is that the PAC cannot sufficiently fix the hold-up in the country’s infrastructure. According to specialists, if the economy were to steadily grow at a rate of 5 percent per year, the electric energy bid would have to grow some 6.5 percent, and all this with the program’s annual growth rate of 3.1 percent.

Other opinions indicate that is a similar situation with the construction of highways, where it is predicted that four times as much investmemt than what was announced is necessary. “A year after its launch the PAC has still not completely gotten off of the ground”

The PAC is a necessary plan, with a realistic and intelligent financing model that opens the doors to ’s sustained growth. A year after its launch it has still not completely gotten off of the ground. There is a delay in the execution of the work and doubts regarding the state’s financing of the project. The objective of fiscal surplus and the elimination of the check tax generate uncertainty about the fulfillment of the planned works.

Let’s hope that the objective of economic growth not be sacrificed in favor of other objectives, and that the plan is not nothing more than a sensational announcement. Time will tell.