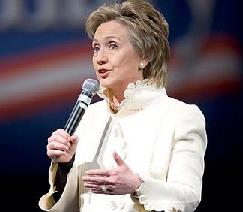 The primary elections have managed to put the fire back into political debate in the , in the presence of the still uncertain presidential result. The most complex issue remains unresolved: for the world’s superpower to confront the difficult global strategic situation, which is full of uncertainties. Will Hillary Clinton be the one in charge of leading this global change?

QUITE A FEW YEARS AGO, in the midst of the postwar world, the dressmaker Pedro Rodríguez explained to his yes-men in a pleasant, private meeting how the high fashion world must react in view of a crisis: when the price of fabric increases and there is uncertainty in the market, he said, the chic woman wants a skirt down to the ankles, and when we can pay for yards and yards of cloth she wants it above the knee.

Judging by Dior’s magnificent fashion show in , said company seems to have appropriated the aforementioned distinguished Spaniard’s old strategy for themselves, enhancing women’s elegance even more during these difficult times for the economy. “The fact that women are “in” is nothing new, but that, for the first time, one could become the president of the , is”

It appears to be less orthodox for the economy to go against this elegance, as opposed to reducing the value of the currency by three quarters of a percent, even though it is perhaps not any less efficient. But upon observing John Galliano’s proposal for his 2008 line more carefully, an expert would perhaps dare to recognize the creator’s genius in predicting women’s triumphant entrance into international society’s most chic salons. The fact that women are in is nothing new, but that, for the first time, one could become the president of the , is.

Hillary Clinton is a reality. After the embarrassment suffered in Iowa, the Democratic candidate has turned her campaign and the delegates’ intention to vote for her in New Hampshire, Nevada, and South Carolina (Editor’s note: Barack Obama has actually won the primary in South Carolina) around. “Obama’s proposals, without being very different, are being diluted” With these victories she finds herself in the position of being her party’s principal hopeful in the upcoming electoral primaries, against Barack Obama, who some analysts already attempt to paint as the first president of color, even before having defeated the Democratic establishment in which the make their political experience valuable.

Hillary is going to propose a reduction in the number of troops in , a conflict resolution strategy that has the support of allies, five million jobs in the new green market and the reopening of the public health reform debate, which she unsuccessfully led a decade ago.

IS OBAMA BEING DILUTED?

Obama’s proposals, without being very different, are being diluted with the Senator from ’ attempt to present his political figure as being the necessary patron for designing a different, modern American society. These are ideas that have come to the new voters, and to many indecisive people who see Hillary as a progressive who has lost some weight in order to be able to wear the thin suit of liberal centrism. However, the message carried by yesterday’s feminist has nestled itself into the hearts of female democrats, and this has helped her earn the top position in the polls. However, in order to win the presidency the message must also find its way to the hearts of Hispanic women, and do something even more difficult; it must make an impression on a good number of the conservatives, with whom she must clarify her position on the decisive cultural wars: family, education and moral values.

The Republican candidates still do not fit into the presidential suit. None of the leading hopefuls has managed to turn himself into the masculine model that can erase the neo-conservatist image of the party and once again popularize the traditional liberal conservatism of leaders like Reagan, for whom those in the American left long today.

“The only unknown that still needs to be resolved is whether or not Rudolph Giuliani will don the mask of a charismatic leader” For the moment, Mitt Romney [1]’s optimism and executive character are the only comparable referents, although his Mormon affiliation could come to hurt him in a society that harbors many beliefs but keeps a close eye on the line between a religion and a sect. It is precisely Mike Huckabee [2]’s evangelical profile that has allowed him to stand out in , but it is all but certain that to the average American, the James Stewart of this century, the debate between Creationists and Darwinists is very stale. Moreover, Protestant fundamentalism was packed away into Karl Rove [3]’s suitcase when the head of Bush’s campaign left the White House, with the conflict regarding the origin of man still unresolved. Perhaps at the end of the long electoral process the only candidate capable of contributing some moderation to the exalted Republican discourse of the last few years is John McCain [4], a veteran of wartime and political defeats.

The only unknown that still needs to be resolved is whether Rudolph Giuliani [5] will don the mask of a charismatic leader when the campaign gets to the East Coast or whether he will take it off so as to not sully his image as a bold and combative political leader when it comes to international terrorism for the 2012 campaign.

THE NEED TO RECOVER VALUES

The 2008 elections have already fulfilled their first objective. They have signaled the end of the crisis in the American democracy, which has put the fire back into political debate in the , in the presence of the still uncertain presidential result. The second objective is more complex. It is for the world’s superpower to recover the necessary values in order to drive international relations towards solutions that will allow the difficult global strategic situation to be tackled head on, which, far from having ceased to be an important topic, has become an unsettling reality.

Without wanting to add more fuel to the fire of uncertainty, the 2008 Political Risks report [6] developed by the multinational AON Corporation indicates that 25 of the top 50 world economies have an elevated risk level, a very troubling figure even when seen through orthodox eyes, such as those of the Spanish Minister of Economy and Finance, Pedro Solbes [7].

If Hillary Clinton is in charge of leading this global change, history will be carried into the twenty-first century on the arms of women, and this fact could have an impact in societies where discrimination because of one’s sex, gender violence and inequality are the striped prison outfits that hinder the progress of individual freedom. And it could also have an impact in European countries in which it is still more fascinating to watch Sarkozy stroll through the desert with model Carla Bruni than to watch Angela Merkel eloquently pose among 25 ministers in a European Counsel.

The old , always so chic.