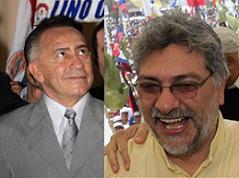 Isolated for so long, and lacking a political culture on which to force democratic values, needs help and support from its neighbors in order to move forward. This is especially needed from , the obligatory country of reference for Paraguayans, and one of the few countries that are capable of positively influencing the management of what will be the new government after the presidential elections in April.

HOLDS ELECTIONS on April 20, 2008. The electoral propaganda will deploy all of its persuasive resources starting on the 18th of February. Something more than two million citizens older than 18 years of age will elect 80 members of Parliament, 45 senators and 17 departmental governors with their corresponding municipal boards. The new authorities will take office on August 15.

“Talking about democracy in Paraguay is like imagining verdant English meadows amidst the sand dunes of the Sahara Desert” A survey from mid-January gives ex-bishop Fernando Lugo [1] the electoral triumph (43.5%), almost 28 points ahead of ex-soldier Lino Oviedo [2].

So that the reader can orient him or herself: in 1996, when Wasmosy [3] was president, Lino Oviedo was a general and the army chief. Faced with an order to retreat, he threatened to bomb the Presidential Palace, and so Wasmosy appointed him as Secretary of Defense. But in view of the Parliament and common people’s protests, he revoked the appointment. was convicted of sedition, and condemned to ten years in prison. Pure magical realism.

The Colorado Party [4], which has governed for the last 61 years, is represented by Blanca Ovelar [5], ex-Minister of Education, who directs the Progressive Colorado Movement, and has Carlos María Santacruz as a vice-president running mate. She won a long, internal battle among the Coloradoans, which revealed the division within the party: the ex-vice-president Luis Castiglioni [6] challenged his fellow party member’s triumph, and he claims that he was robbed of the nomination.

This is nothing new. In the primaries of December 27, 1992, Juan Carlos Wasmosy (president from 1993 to 1998) won, at the expense of Luis María Argaña [7], in what many Coloradoans recognize as a fraud. Years later, in 1998, Argaña was elected vice-president, and Raúl Cubas [8] president, and seven months later (in March of 1999) Argaña was assassinated, after which had to resign.

But nothing will change after Election Day. It must be said that talking about democracy in is like imagining verdant English meadows amidst the sand dunes of the .

“We are facing a typical case of elite parasites and predators who receive everything from the State (the State is theirs) and give nothing to society in return” Paraguay is the property of the Colorado Party (they have been in power since 1947), the military and the Catholic Church, who all worked together very closely during the General Alfredo Stroessner [9]’s long dictatorship (1954-1989). The dictator consolidated a State of thievery, a predator of public resources, which has not yet been dismantled, and acts as a serious obstruction to the development and modernity of the country.

The public credit is not directed to those who could increase production and generate wealth for the country, but instead to a tiny elite whose loot is the State. The public businesses are not well managed, and they will not know how to put up a fight against competing businesses in an open market.

And even though in the year 2000 the Senate passed a law that created a professional public service based on the merits of the employees, with a system of professional promotion and periodic evaluations, there is no proof that such an initiative works in Paraguayan public businesses. Likewise, the Judicial Power is corrupted by the paths that connect it to political interests.

The civil society is weak, and cronyism continues to be the country’s political culture. We are facing a typical case of elite parasites and predators who receive everything from the State (the State is theirs) and give nothing to society in return.

THE ELITE, USURPERS OF PUBLIC RESOURCES

In Latin America, democratic legitimacy’s compatibility with satisfactory levels of public rationality is an unresolved problem, and is a typical case of this. As long as it does not confront this problem as a matter of priority for public politics, we will not be able to talk about legitimacy.

“It is estimated that, during Nicanor Duarte’s administration, about 600,000 Paraguayans had to abandon the country, due to poverty and a lack of job opportunities” The elite continue to be usurpers of public resources, in a State that is something less than a State: the former Intendancy of Paraguay was always in the hands of a select-few group of citizens, a republic of noteworthy people, exclusive and exclusionary.

And so entered into the 21st century with the burden of matters that they never wanted to tackle, and modernizing the country continues to be a pending task.

is the patrimony of a tiny elite, a bounty-State, a private republic, a great Treasury at the service of few, with exclusion of practically the entire population. In the historical period of the second Coloradoan hegemony, from 1947 until today, the twelve presidents were Coloradoans, with Juan Carlos Wasmosy being the first civil president in 40 years. In short, is a prime example of up to what point the Creoles have been running things for two centuries.

’s corruption is well known, and there are euphemisms to refer to it: the smuggling of computer materials and other products to Sao Paolo is called triangular trade, an expression that has its origins in the trade route that, between the 16th and 19th century, was conducted between Europe, Africa and .

The products are imported from , and they head towards Ciudad del Este and arrive at their Brazilian market. The triangular trade involves terrible border management and a loss of fiscal income for the State, because the money that the triangularity produces finds its way to private pockets.

“The elections are welcome, even though we cannot hope for much from the new government, unless outside forces act from the Brazilian side” Luiz Alberto Moniz Bandeira [10] writes that if Paraguay is not in a better situation following the completion of the construction of Itaipú, the cause is the weakness in its productive structure, lacking in a working class culture and penetrated by infractions. And outside of is not viable. More than 30 percent of its exports are destined for the Brazilian market, and if smuggling is taken into account, this percentage rises to much more than 60 percent.

It is estimated that, during Nicanor Duarte [11]’s administration, about 600,000 Paraguayans had to abandon the country, due to poverty and a lack of job opportunities.

A bishop that renounces his position to be a candidate, and a candidate that pushes her feminist image, constitute attractive novelties for journalism, but could be mere anecdotes.

Isolated for so long (first by Dr. Francia [12], then by Dr. López, and later almost wiped out by the War of the Triple Alliance [13] (1865-1870) Paraguay needs help and support from its neighbors to move forward, and above all from Brazil, a country which is an obvious reference point for Paraguayans.

In short: the elections are welcome, even though we cannot hope for much from the new government, unless outside forces act from the Brazilian side.