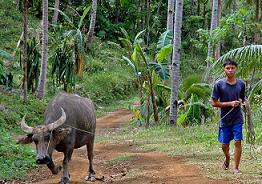 After years of colonial and dictatorial rule in the , the People Power Revolution of 1986 installed a new government and led to the initiation of the Comprehensive Agrarian Reform Program (CARP). Yet more than twenty years later, poverty remains high in rural areas and income inequality remains a serious problem. The author faults the program’s land to the tiller concept and goes on to argue that access to jobs, and not land ownership, is a better way to reduce rural poverty.

(From Manila) IN THE PHILIPPINES, few issues incite as much passion and interest among the masses and leftist groups as agrarian reform, because it calls for the redistribution of land to small farmers and landless agricultural workers. This is an appealing concept for the left, and with poverty so pervasive and the majority of households landless, it is part of every Filipino’s dream, and not just that of the farm workers.

“the concept of land ownership was poorly understood by most Filipinos at the time, as they were more accustomed to their traditional concept of communally-owned lands” Ever since the country’s independence, successive governments have attempted to break up the expansive agricultural estates, which date back to colonial times. However, the landed elite and political patronage have conspired to prevent previous land reform programs from making any headway.

Nonetheless, hope arrived in the form of the People Power Revolution [1], which in 1986 ousted the long-serving dictator Ferdinand Marcos [2], and in the following year, the Comprehensive Agrarian Reform Program (CARP [3]) became the centerpiece of the new government.

Under Spanish rule, which began in the 16th century, all land was passed to the Spanish crown in adherence to the Regalian Doctrine [4] of ownership. In fact, huge tracts of land fell under the ownership of friars and the Church. Only a very small number of privileged Filipino families were able to acquire property and become landlords, a state of affairs which has continued to the present day.

All lands became public lands with the arrival of the Americans, although a more systematic system for land registration and ownership was put in place, and private titling was encouraged. “Overall, the agriculture sector is hardly any better off now than it was 20 years ago, because macro policies are biased against the sector” But the concept of land ownership was poorly understood by most Filipinos at the time, as they were more accustomed to their traditional concept of communally-owned lands. Native tribes, especially those in , were neither aware of nor able to grasp the concept of titling. Once again, only a few Filipinos (often the educated and prominent families) were able to take advantage of the opportunity and acquire land titles.

Thus, agrarian reform is supposed to be a means to redistribute land and wealth, and correct the centuries of injustice and inequality brought by colonialism. More specifically, Philippine agrarian reform entails not just land reform but also support services such as credit, infrastructure, agricultural extension and marketing. Furthermore, it also has a political objective: to address one of the causes of communist insurgency in the country, and as such, to promote security and social stability.

And yet with more than 9 million hectares of (mostly public) land already distributed to more than 6 million farmers under CARP, poverty remains high in rural areas, income inequality is still a serious problem and the communist rebels continue to cause problems. All of this means that distributing lands to the poor does not necessarily guarantee that their economic conditions will improve without corollary services such as infrastructure and access to credit to make the land productive, as well as social services, specifically in the areas of health and education, which failed to materialize under CARP. “The stark reality is that land is no longer the primary source of wealth in the . On the contrary, access to jobs, and not land ownership, is a better way to reduce rural poverty” Overall, the agriculture sector is hardly any better off now than it was 20 years ago, because macro policies are biased against the sector.

One of the program’s problems is that it is based upon the land to the tiller concept. This means that those who actually till the land should be given the property right to the land they till. However, 70 percent of the rural labor force is composed of landless agricultural workers, and unless they work on plantations, agrarian reform does not apply to them since they are not share tenants, and hence are not entitled to owning a piece of the land. Unfortunately, poverty is highest among this sector of the population, and they have instead became the hired labor of land reform beneficiaries, who in turn have earned higher incomes by engaging in non-farm activities. This arrangement has transformed them into petty landlords and the landless workers sub-tenants.

The stark reality is that land is no longer the primary source of wealth in the . On the contrary, access to jobs, and not land ownership, is a better way to reduce rural poverty. However, investments in agriculture have stagnated as CARP has had a discouraging effect and even resulted in the decapitalization of some farms. Thus, the creation of jobs in the agricultural sector is hampered and poverty incidence remains high, despite CARP.

But as CARP’s first extension draws to a close this year, proponents of the program are fond of citing impact studies that show that it has led to higher incomes and reduced the incidence of poverty during the years 1990 to 2000, as an argument for why the program merits another extension. Ironically, the same arguments that were made in 1997 to renew the program for another 10 years are once again being used to extend the program for another 5 to 10 years so that the remaining 2.5 million hectares, which should have been distributed in the first extension, can finally be distributed.

Review of agrarian reform initiatives in other countries over the last decade reveals that redistribution has often not succeeded in attaining the intended goals, as poverty levels remain largely unchanged. One important lesson that can be drawn from international experience is that in order to be successful, it is essential to implement reform in the shortest amount of time possible, which is a lesson lost on Filipino legislators, NGOs and leftist groups in Congress.