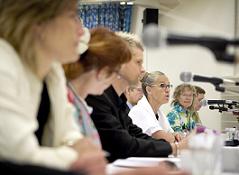 The origin and expansion of think tanks on a global level: does it have to do with civil society’s greater level of involvement in governmental duties, or, on the contrary, is it a response to the crisis of representation in political parties? Do they act as bridges between the rulers and the citizens, or as a new, elitist model where the experts substitute those politicians branded as demagogues and populists that are in power. To follow: the first part of an analysis of the impact and transcendence of think tanks in current cyber-democracies.

(From Buenos Aires) THE GROWING INFLUENCE OF THINK TANKS in contemporary democracies is attracting academic attention and being interpreted in different ways. This broad theme park, composed of intellectual research, analysis and production centers, and groups of experts who offer advice and spread ideas among influential circles and opinion leaders regarding national and international political and economic issues, can be seen as part of a political-cultural development consistent with the greater link between civil society and political life and the greater complexity of the government’s duties in current societies. On the contrary, it can also be seen as a result of the crisis of the traditional forms of political representation and participation, political parties, and the search for supplementary mechanisms to fill in the holes that these parties once did.

“Think tanks have come to form a part of the political system in the United States, either as spokespeople for the dominant political currents or as centers of specialized analysis” Both tendencies and processes (civil society’s advance and the parties’ retreat from political life) coexist and deserve special and differentiated attention. In the oldest democracies, like those of Western Europe and the , think tanks spring forth as groups that exert pressure and influence on the government’s nerves and public opinion, as complements and counterweights to the State’s bureaucratic structures and the apparatus and mechanisms in favor of representing specific ideas and interests. On occasion, they can partially or completely modify or reroute the direction or content of some of the executive’s policies or legislative decisions, and even come to plainly and candidly replace some policies for others. On other occasions, they offer the rulers the possibility of correcting errors, improving their policies and responding to the multiple, dizzying and changing demands in the era of globalized politics and online in real-time governments.

THE ORIGEN OF THINK TANKS

It is worth remembering that these think tanks first appeared in the , and were linked with private academic, corporate, and business institutions and the military-industrial complex’s organizations. They were composed of nuclear theorists and academics of various disciplines, who carried out political analyses or formulated recommendations with the goal of providing intellectual input and giving ideas the strength to be influential in sensible and prominent areas of government and civil society, in the parliamentary and executive fields, and in public opinion.

As such, think tanks have come to form a part of the political system in the , either as spokespeople for the dominant political currents (liberal and conservative) or as centers of specialized analysis. “In Latin America, older antecedents can be found in academic research centers and social-economic research institutes that were limited in their actions by military dictatorships” In the evolution of foreign policy there were moments in which they decisively influenced directional restructuring and the marking of a new course for key strategic questions. The role of neoconservative think tanks in the Bush Administration’s drastic reorientation of American foreign policy, and in the very decision to go to war in Iraq, has (in vain) been treated and pointed out as having been a distortion of tremendous consequences.

Starting in the Eighties, the creation of these updated intellectual support systems tied to governments, parties, power groups and the media began to spread throughout Europe and . In particular, beginning in the Nineties after the end of the Cold War, with the expansion of the Internet, the processes of democratization and market reform, new agendas and tasks had to be seen to, and the teams of experts ready to provide their recommendations were there. In the case of , these think tanks converge and appear in relation to political foundations and centers of academic research and analysis of older data.

In , older antecedents can also be found in the form of academic research centers and social-economic research institutes that were limited and occluded in their actions by military dictatorships. The first stage began during the transition to democracy and the beginning of the democratic governments’ management, with foundations and centers of study promoted as intellectual expressions of political parties, or as academic in nature, with objectives such as leadership formation, international cooperation and the receipt of finances to fund projects that work to promote democracy. There counterparts can be found in international European and American foundations and centers.

“Anti-political technocracy could access the power in the authoritarian leadership’s hands and its influence could grow when adequate mechanisms of public control and idea contrast do not exist” During the second phase in the Eighties and Nineties, two types of core groups began to develop: on one hand, associations and NGO’s defined as representing civil society opposite political institutions, in defense of determined ideas or rights. On the other hand, there were institutes and centers that follow the Anglo-Saxon model of group of influence over the government’s politics or the political system.

The third phase, these past few years, shows the consolidation of some of these experiments: how they are linked together in the form of networks (electoral observatories, social and environmental policy networks, security and defense networks, freedom of press, corruption, human rights). What is more, we can observe the multiplication of other interventions, associated with social or opinion movements related to demands or topics of specific interest, linked together with the phenomena of resistance to globalization, environmentalists or those opposed to the war.

THE MOST FEARED MONSTER

Finally, even though it is not technically a think tank, it is worth taking note of this new territoriality strengthened by Information Technology, the circulation of ideas through webpages geared towards generating a space for communication, a meeting place, and a reference for communities of citizens or societies of web surfers that are not necessarily looking to directly influence the government’s policies or decisions, but that can indirectly exert such an influence (for more information on this topic, please see Javier del Rey Morató’s recent and excellent book “Political communication, Internet and Electoral Campaigns. From a tele-democracy to a cyber-democracy”, , 2007).

In short, this is about new fields of confluence, between knowledge and politics and the State and society.

These fields can broaden and enrich representative democracies when they act as a bridge between the rulers and the citizens, or can only just emulate the old, elitist models of democracy in which it would be up to the experts and administrators to replace the politicians branded as demagogues and populists that are in power.

Experience indicates that this second variant tends to coincide very much with the most feared monster: anti-political technocracy accessing the power in the authoritarian leadership’s hands and its influence growing when adequate mechanisms of public control and idea contrast do not exist.

The Foreign Policy Research Institute (FPRI [1]) in has just published an extensive study on the 5,800 think tanks and civil society programs that it has counted in the world, and chosen (after expert evaluation) the 10 best.