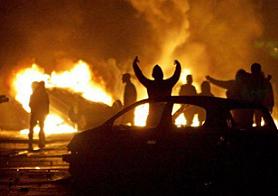 The French President, Nicolas Sarkozy was Minister of the Interior during the greatest urban disturbances in recent French history, which took place in the most marginalized neighborhoods of the principal cities. He wants to avoid repetition of these events. The twentieth plan that he wants to apply to the suburbs has been dubbed Hope. Are the measures effective? What is the origin of the violence? Are we dealing with an Islamic revolt? Will it be useful to maintain a hard line?

FROM OCTOBER 27th TO NOVEMBER 17th 2005, experienced the greatest urban disturbances in its recent history, centered in the most marginalized neighborhoods of the country’s main cities. The riots were unleashed after the death of two young people in Clichy-sous-Bois (a city in the area surrounding ), who were electrocuted for evading police persecution. The riot later extended to all of and affected close to 300 municipalities. Recently, rioters set fire to almost 15,000 vehicles, more than 10,000 policemen have been mobilized every day, and 600 people have been sentenced to prison. The most shocking of all was the implementation of a curfew, in accordance with a recently dug-up legislation from 1955 (from the Algerian War period) that was not even applied during the May 1968 riots.

“Sarkozy´s critics reproach that, like other plans, this one does not have the specified funding either, or at least sufficient funding” The current French President, Nicolas Sarkozy, was a central figure in those riots because he was the Minister of the Interior of the time. He now wants to avoid their repetition with a new plan. This is the twentieth plan for the suburbs, and for this very reason it is looked upon by some with skepticism. Sarkozy presented his plan, dubbed Hope, in an official ceremony at the Presidential Palace in Eliseo, accompanied by representatives of associations involved in the suburb problem. Fadela Amara [1], his Secretary of State for the city and the politician in charge of carrying out the measures, is the daughter of Algerian immigrants and the founder of an association called Ni putes ni soumises (Neither whores nor slaves) to support women.

The program, described as a sort of Marshall Plan for the marginalized French neighborhoods has placed stress on matters of education and employment, but also on security matters. Sarkozy´s critics reproach that, like other plans, this one does not have the specified funding either, or at least sufficient funding for the magnitude of questions that it attempts to address. And that is perhaps its first failure, that by intending to address everything, the plan will end up being a commendable but unattainable declaration of intentions. Above all, this could occur because the plan is being presented during the short term of a political legislature. The plan must be added to those proposed by at least nineteen City Ministers in the last 17 years, none having managed to eradicate the problem.

Many things could be said about the suburban revolt in 2005 (or about the other sporadic episodes that occurred a few months ago or new episodes that could occur), but one thing that could not be said is that they came as a surprise. For more than 20 years, all of has been accustomed to the existence of these areas, in which urban marginalization and the ethnic segregation have ended because they have reached perfection.

The first suburban riot dates back to Vauly-en-Velin (a suburb of Lyon), followed by the October 1980 successes in Marseilles, when the youth of the northern neighborhoods confronted the police after the Republican Security Company’s (CRS in its French initials, disturbance control) murder of a Marseille youth of Algerian ancestry.

“They are isolated neighborhoods, conceived in order to accommodate automobile workers, and they do not have any space, not even for cabarets, taverns, bars, or any other type of amusement” The urban areas of these neighborhoods are characterized by their undistinguished and dull architecture, and are prone to neighbors not knowing each other. According to some sociologists, this fact is partially to blame for the riots.

The social neighborhoods of the suburbs, with their HLM (Habitations à Loyer Modéré, housing at moderated rents), emerged as a concept after World War II. These neighborhoods were initially inhabited by immigrants from the French countryside, followed by those from Southern Europe ( and the Iberian Peninsula), and finally newcomers from and the former French colonies. The very word suburb, even though it has medieval origins, seems taken from the vernacular or slang used in those neighborhoods, and means: lieu de ban, or place of exile.

With the , these urbanization plans reached their culmination point, in that between 1960 and 1975 the bulk of the current buildings were constructed. They are isolated neighborhoods, conceived in order to accommodate automobile workers, and they do not have any space, not even for cabarets, taverns, bars, or any other types of amusement. They are barely connected to the city centers, and in practice they function more like planned ghettos than like harmless bedroom communities.

This scene has caused the riots that are we are now trying to avoid. And if the urban geography appears to be one of their causes, other social characteristics of the inhabitants are not any less so.

“The sentiment of social frustration and racial segregation that those behind the riots say they are experiencing could be channeled by political-religious justification in the near future” Immigrants comprise nine percent of ’s population, a percentage similar to that of and somewhat lower than that of . However, those behind the fall of 2005 uprisings were largely French citizens, albeit second or third generation immigrants, principally of ancestry. In these immigrant families, the rift between the culture of the foreign-born parents and their children born in has been accompanied by a weakening of the patriarchal system.

And if until now the Republic had succeeded in acculturating all of those who lived in its territory and converting them into French people and not Bretons, Alsatians or Occitans (Provençal), they are currently facing people born and raised in who do not recognize their own country. In these places without roots, some people tend to build an identity on a more basic level: that of a band or a gang.

Since the majority of the youths in the suburbs are Muslim, many have wondered about the role that religion might have played in the riots. The principal question is whether or not the disturbances can be considered part of the jihadist confrontation against the West unleashed by Al Qaeda since the September 11th, 2001 attacks.

Nevertheless, this is a past circumstance that does not keep the religious factor from gaining more importance, and the sentiment of social frustration and racial segregation that those behind the riots say they are experiencing from being channeled by political-religious justification in the future.

Religion (principally Islam) tends to find its way into these marginalized neighborhoods (the suburban slums) more and more. But it must be mentioned that it does this in contrast to another phenomenon: drug consumption, which has been growing in the past ten years as a religious practice.

What should the 2005 disturbances be attributed to then, and what factors must we keep in mind in order to avoid them? Without a doubt, some of those that have already been mentioned, but also others which are related to the media and are even directly political in nature.

“The 2005 riots had consequences for the political strengthening of those who, like the then Minister of the Interior, Nicolas Sarkozy, had shown themselves from the beginning to be followers of the hard line” As I witnessed in the autumn of the Parisian suburbs, the disturbances were not so much a protest of the masses, as a protest of specific sectors of those neighborhoods. They barely clashed with the police presence. However, there were numerous isolated incidents that were difficult to predict, as there was no assemblage and they were only being for those members of the criminal circle that caused the quarrel. Around 10,000 youths, 15,000 according to other estimations, participated in those incidents. In general, they acted in small groups of ten to fifteen members. The car fires thus acquired a character of competition between the different groups or gangs involved, in the different neighborhoods of the French suburbs. They were a type of copycat riots, to employ an expression coined by the British press in the summer of 1981, when riots in the working-class district of Toxteth, in , were followed by similar ones out of pure and simple mimicry.

The French youth that saw the cars that they burned on television fed off of their own behavior, as well as that of other youths who, like them, were expressing their state of unrest in all of France in such a way. The presence of the international mass media in their neighborhoods contributed to the same effect. I had the opportunity to be on Clichy-sous-Bois, the very avenue where the incidents had initiated, where I chanced upon companions from other countries and heard informative tales of the events that fit in with those in Kosovo-Macedonia and .

All of this occurred in a closed-off night during which nothing happened, in a lost place in the outskirts of , without there any assemblage whatsoever. This did not cease to surprise me, taking into account the media importance that the phenomenon has received.

The 2005 riots, with their furious, desperate and disorganized character, had consequences for the political strengthening of those who, like the then Minister of the Interior, Nicolas Sarkozy, had shown themselves from the beginning to be followers of the hard line. With each car burned, the strengthened image of the then Minister and current president reached the eyes of the shocked French people, who were unable to understand the phenomenon that was occurring in their own backyard. The measures that Sarkozy is now proposing can be effective as long as they enjoy a sufficient consensus and are extended in order to solve a problem that has been around since the last few decades, and not just the last few years. However, they will not be effective if they are only used in an attempt to reinforce that hard line of good electoral returns, while being capable of activating that action-reaction chain, and consequently inciting neighborhood discontent.