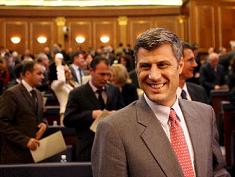 The very first fundamental condition that must be met in order for a State to exist is for other international players to recognize it. In that case, Kosovo is already a full State, since it has been recognized by the strongest members of the European Union (France, the , and ) and the . But is this recognition enough for Kosovo to begin its independent life? Does Western support make the viable?

JUST AS IT HAD ANNOUNCED THAT IT WOULD, Kosovo’s Parliament officially and unilaterally declared the Serbian province’s independence this past Sunday, the 17th.

We, the leaders who have been democratically elected by our people, proclaim through this declaration that Kosovo is a sovereign and independent State. With this simple text, the members of Parliament (incidentally, among those members who were not present were the eleven minority representatives, including the Serbians) announced their unanimous feeling during an extraordinary session of Parliament.

The absence of these representatives did not surprise anyone, no matter how much Hashim Thaçi, prime minister of the now former Serbian province, assured that the new State would be a democratic, multiethnic and nondiscriminatory republic. Of course this was a clear allusion to the more than 100 thousand Serbians that live in Kosovo, whose mass exodus would project certain images to the world, an embarrassing one for Pristina, but a firm one for .

“Supervised independence creates certain obstacles for the implementation of Kosovo’s solitary life” The first and fundamental condition that must be met for a State to exist, even before authority and sovereignty, is for other international players to recognize it (let’s think about ). In that case, Kosovo is a full state, since it is recognized by the strongest members of the European Union (France, the , and ) and the .

Is this recognition sufficient for Kosovo to begin its independent life? In other words, does Western support make the viable? There are several factors in existence that question this fact: legal, economic, political and social ones that, in the very least, force Kosovan independence to be a continuation and affirmation of its foreign dependence.

Officially, people have preferred to speak of a supervised independence. This is quite a contradictory topic that is based upon two underlying ideas: on one hand, when analyzed from the term’s point of view, a supervised independence implies that complete freedom will never be achieved (at least not in the upcoming years) , but that it will enjoy a partial and/or specific type of freedom. On the other hand, said supervised independence implies that Kosovo will continue to depend on foreign aid. In other words, this would be the same situation that has characterized the seventh and eighth states carved from the dismemberment of the former during the past eight years.

In a certain way, that supervision also creates certain obstacles for the implementation of Kosovo’s solitary life immediately after it announces its intention to carry out said endeavor. Some of these obstacles are essentially de jure, while others are de facto.

A VIOLATION OF INTERNATIONAL LAW

The UN Security Council Resolution 1244, enacted in 1999, is a well-known exemplar of the de jure obstacles, “The principles of International Law demand that human rights be respected. However, in the case of Kosovo, human rights themselves are identified with the right to self-determination” and was the basis for Milosevic’s Serbian troops consenting to abandon Kosovo, since it dictated that even though a special mission would be sent to the province, Kosovo would formally remain under Serbian sovereignty.

has been appealing to this very resolution ever since Kosovan independence has seemed imminent, denouncing the violation of its territorial sovereignty, which had the support of certain Western countries.

It also violates the very Charter of the United Nations [1] and the Helsinki Accords [2], essential documents that reflect the commitment to Border Inviolability and respect for the Territorial Integrity of States. Moreover, it violates the principles and values of the European Union (process of negotiation, Rule of Law, respect for human rights and the integrity of minorities, etc.). This means that we are dealing with an independence that goes against both International and European Law.

The principles of International Law demand that human rights be respected. However, in the case of Kosovo, human rights themselves are identified with the right to self-determination. “The existence of mafias and smugglers has made Kosovo an authentic enclave of corruption and an exporter of all kinds of illegal trafficking” The non-colonial national peoples’ right to self determination demands that the people be treated on the same level as the rest of the State’s population, but it does not imply the right to independence, or even to an autonomous regime.

Despite all of this, the idea that independence was inevitable has carried more weight. Two peoples and one single territory; hence, there is no possible coexistence. And in some way, due to the fact that it has not been expressed tacitly, Kosovo’s independence was directly caused by Slobodan Milosevic’s repression. That is, the Kosovans are being rewarded, as much as the Serbians are being punished.

A DISORGANIZED STATE EVEN BEFORE BEING BORN

Kosovo’s independence appears to be an authentic challenge, due to the current circumstances that define the new State. Indeed, it is a disorganized State even before being born. Economically, Kosovo would not be able to run without ’ generous aid, since economic recovery has always been very difficult to achieve during these nearly nine years of provisional administration.

The unemployment rate fluctuates between 50 and 80 percent of the population (depending on the region and age), and the existence of mafias and smugglers has made Kosovo an authentic enclave of corruption and an exporter of all kinds of illegal trafficking. Poverty is the norm, and indeed a high percentage of the population lives below the poverty line. It is true that Kosovo possesses mineral riches, but it lacks the industry necessary to develop the sector.

Hope for Pristina falls squarely on ’s shoulders, and it is not making any mistakes: the EU has already announced that it will pump billions of Euros into Kosovo during the next two years.

The political and bureaucratic arms are not free of corruption either; nepotism constitutes a general practice, and is partly derived from the Albano-Kosovar society. Said society is structured in a system of clans, where the political parties are based on familial alliances and a handshake. “Why punish the of today, democratic and respectful of International Law, for the acts committed by the of the 90s, blinded by its own tragedy and that of its people?” As the analyst Juan Garrigues [3] asserts, this reinforces the rampant corruption and the deficient administration. And this is without even mentioning the status of many of its political representatives (as well as representatives of other sectors of society, such as the educational sector), who stopped being a part of the resistance against once they came to politically represent the will of the citizens. Such is the case of the prime minister himself, Hashim Thaçi, former leader of the KLA (Kosovo Liberation Army) guerrilla, which was transformed almost overnight (under international auspices) into the Democratic Party of Kosovo (DPK), which has been headed by Thaçi himself from day one.

It is appropriate to mention here that those members of the KLA that did not adhere to the political practice came to swell the ranks of Kosovo’s security forces, on both the political and military sides. This means that they were never accountable for justice. On the other hand, the abuses denounced by Kosovo’s minorities during these almost nine years have been collected by diverse ground NGOs. The human rights situation (that of minorities and women in particular) is also lamentable.

Human Rights Watch denounces the unresolved and even aggravated problems of these years of provisional administration (organized after NATO’s intervention in 1999), among which the following stick out: the inadequate penal system, domestic violence and other abuses against women, the difficulty for refugees and displaced people to return (a fact denounced on multiple occasions by UNHCR), the pressing situations of the Romany, Ashkali and Egyptian communities (whose participation in public life is insignificant), the inadequate vigilance and the deficiency of international ground organizations.

DOES A PRECEDENT EXIST?

The so-called Ahtisaari Plan [4] will constitute the base upon which the process of independence will be built. With respect to said project, it is worth stating that it is as optimistic as it is utopist, paying attention to aspects such as community rights, decentralization in favor of the good government, transparency, fiscal sustainability and efficiency, the justice system, etc. Implementing all of the mechanisms that the plan proposes would not only take years and years, but it would also need a good deal of support from .

“Kosovo’s independence can only be explained by seeing the ex-province as a burden that is already weighing too much on the international community” And yet, this independence will be based on the Ahtisaari Plan. Perhaps it would also be convenient to keep in mind the 2007 Special Envoy report [5], which states that the genesis of Kosovo’s conflict can be found in Milosevic’s political oppressors. Agreed, but then, why punish the of today, democratic and respectful of International Law, for the acts committed by the of the 90s, blinded by its own tragedy and that of its people? On the other hand, is Kosovo’s independence perhaps proving Milosevic partly right? Not in vain, an independent Kosovo will undoubtedly establish a separation between Serbs and Albanians.

Those interested in independence respond to the voices that claim that Kosovo is a special case. Of course. Just as it is also true that in we have been witnesses to the celebrations of the nationalist parties (the Basque Nationalist Party—BNP—called the Kosovan independence the triumph of liberty). Abhkazia and have already openly made known, and very logically at that, their desire for a Kosovan style independence.

In short, Kosovo’s independence can only be explained by seeing the ex-province as a burden that is already weighing too much on the international community.

But let’s not fool ourselves: Kosovo is going to continue demanding attention and international dedication. It cannot happen any other way. And if the worst predictions come true, and does not accept carrot (give in with Kosovo and you will be closer to entering), instability will once again darken the Balkan sky.