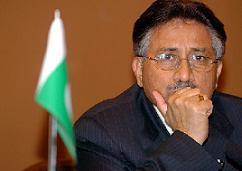 Pakistani voters have sent a clear signal to Musharraf and the PMLQ: Get out! The author pleads for the political leadership to close ranks and provide a united front against the powerful military-led ruling dispensation, and calls on the West to pressure Musharraf into stepping down. The Pakistani people will benefit from the transition to civilian rule, as will the West, who in a democratic will have a bulwark against Islamic radicalism, he argues.

THE PAKISTANI PEOPLE HAVE CLEARLY SPOKEN. The results of February 18’s general elections unequivocally demonstrate that they want to bring an end to dictatorship and would like Pakistan to embark on a transition to civilian rule. Musharraf’s political dispensation (the PMLQ [1]) was very badly beaten by the opposition parties; as expected, the PPP secured the top party position, while the PMLN [2] came in second. The PMLQ has conceded defeat, and President Musharraf has indicated that he is willing to work with the new political leadership: both good signs for the country.

The people’s current mood is one of exhilaration, as there is now hope that the country will indeed be able to turn itself around. In order to do this, Pakistan is in need of strong civilian leadership. “There is an unmistakable yearning for stability, peace, and democracy. The people want Musharraf out” The country is suffering from a very complex governance crisis, and having said leadership is the only way that they could possibly solve the numerous problems afflicting the nation. Yet now there is hope. Overall, the general elections were peaceful and comparatively fair, for which the public is relieved. Many were expecting the worse, but in general the outcome of the elections is welcome news to Pakistanis and their friends from abroad. The challenge for the PPP is to form a coalition government with the PMLN; fortunately, the leadership of both parties has indicated that they are ready to cooperate.

OUT WITH THE OLD, IN WITH THE NEW

“Undoubtedly, the West’s interests in Pakistan would be best served by improving the country’s civil society and building democratic institutions as a bulwark against Islamic extremism” The military has finally decided to quit politics, which is wonderful news for the hapless Pakistanis. We must remember that Pakistan has been governed by the military for most of its short history, and the bulk of its problems can be safely attributed to such rule. The military had no business ruling Pakistan in the first place, which the people of Pakistan (and hopefully the military itself) now clearly understand. Quite simply, the people are fed up with Musharraf’s government, and the election results were primarily a protest against the now-retired general. There is an unmistakable yearning for stability, peace, and democracy. The people want him out. Still, Musharraf has no intentions of resigning from office, even though he opportunistically wants to work with the new civilian leadership. This is understandable, but tolerating Musharraf now would be a folly. It would be better for Pakistan if he were to gracefully relinquish his power. “Pakistan is a nation-in-the-making of nearly 170 million strong, and it has undoubtedly tremendous potential to lead the Islamic world” Getting rid of Musharraf will send a clear message to the military that the people have resoundingly rejected any role for it in the country’s future. The people have suffered enough already.

The political leadership should now close ranks and provide a united front against the powerful military-led ruling dispensation. The sensible thing to do would be for the PPP [3], PMLN, ANP [4], and MQM [5] to form a national government. Only unity governments of all opposition parties can possibly move the planned transition from military to civilian rule along. Musharraf himself is the symbol of past military rule, and thus he must go, in the greater interest of Pakistan. The man is now stale and has run out of ideas. He is merely clinging on to power instead of doing the right thing—resigning from his position as president of the republic. Musharraf is now an embarrassment for Pakistan that reminds the people of their country’s past failure. No matter, the anger of the people will now force him to leave. “The key is to patiently build the political institutions necessary to accomplish this most important task. A functioning democracy, respect for human rights, and an honest government can set Pakistan on the right path” In the future, military should be kept in its proper place as guardians of the country’s borders; not its rulers. This must be clearly understood by Pakistan’s Western friends.

Undoubtedly, the West’s interests in Pakistan would be best served by improving the country’s civil society and building democratic institutions as a bulwark against Islamic extremism. If there is no hope for a better life, justice, equitable distribution of wealth and an educated populace, the specter of Islamic radicalism simply cannot be eliminated. That much should be very obvious by now. The West, particularly the United States, must now pressure Musharraf to step down as president. His presence will not herald the new beginning and the change that the people now yearn for. The people have spoken their mind, and now everyone that considers itself to be a friend of Pakistan must do whatever it takes to insure that the public’s will is carried out as soon as possible. To that end, the U.S.A. should strongly support the winners of these general elections. The political parties in Pakistan are comparatively much weaker institutions than their Western counterparts and as such they need to be shored up by Western powers. As a matter of fact, the only institution in the country that is still functional is the military, as the others have been largely destroyed by the military itself, or the doings of the past civilian national leaderships.

“Given the seriousness of the governance crisis now ailing Pakistan, this new leadership deserves all the support that Western friends can possibly give it” And this is where the tragedy of Pakistan lies. The secret intelligence agencies, especially the military ones, must now be contained. Their manipulative stranglehold on the country’s politics has produced, among other things, this governance mess. Pakistan is a nation-in-the-making of nearly 170 million strong, and it has undoubtedly tremendous potential to lead the Islamic world. A strong democratic Pakistan should be the West’s dream, as stability, peace and prosperity in Pakistan can and will turn the tide against Islamic radicalism once and for all.

The key is to patiently build the political institutions necessary to accomplish this most important task. A functioning democracy, respect for human rights, and an honest government can set Pakistan on the right path.

The people hope that, by voting for change on February 18, the first step has already been taken. Now it is up to Pakistan’s new political leadership to deliver. Given the seriousness of the governance crisis now ailing Pakistan, this new leadership deserves all the support that Western friends can possibly give it. Much depends on the upcoming weeks. Western powers must act quickly before this window of opportunity is nailed shut. We can only hope for the best.