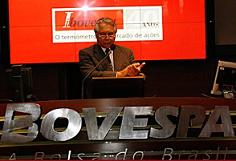 Today Brazil receives an important flow of capital in the form of direct, as well as financial, investments, partly induced by the differential between the American and domestic interest rates. What would happen if the were to effectively slip into a recession and the Federal Reserve were to decide to continue lowering the rates? What would the consequences for the local economy be?

(From Sao Paolo) THE EXCESS OF INTERNATIONAL LIQUIDITY of the last few years, fed by successive reductions of interest rates in the , has produced a phenomenon of valorization without precedent in the active financiers. One of the McKinsey Global Institute [1]’s publications demonstrates that, from 1980 to the present year, the active global financiers have held more than three times as much value as the global GDP. “Private investment in the United States fell 10.2 percent in the last trimester; investment in civil construction dropped nearly 24 percent”

This dissociation between the real economy and the reflection of its monetary or financial value is an irrational expression of the economic expectations, characterizing the merely speculative global stock market profile.

The excess of American liquidity has also produced an irresponsible supply of mortgage loans, which were favored by the absence of efficient supervision and control by official and private organizations. As such, the funds and banks’ investment portfolios contain titles that are either of doubtful solvency or overvalued. A consequence of this is the banks’ reticence to lend money amongst themselves, due to generalized mistrust of the system. This is a situation that leads to a restriction of liquidity, and as such, of credit.

THE IMPACT ON THE EMERGING COUNTRIES

In an attempt to compensate for the illiquidity generated by the mistrust and, together with specific tax reductions, maintain credit and consumption, the Federal Reserve of the United States [2] has reacted with a successive reduction of interest rates. “In order to overcome the crisis some indicators should be preserved, such as: controlled inflationary expectations, levels of investment in infrastructure, primary fiscal surplus and increase in revenue and consumption through greater employment” Nonetheless, it is not very likely that these measures will be able to stabilize the American economy. At the very least, the decrease in consumption from the second trimester of 2007 to the final one showed this. According to the Bureau of Economic Analysis [3], private investment fell 10.2 percent in the mentioned period, and even more dramatic, investment in civil construction dropped nearly 24 percent. The multiplicative effects of this reduction on consumption and employment could be significant.

In light of this scenario, emerging countries are asking themselves what the impact on its exports, exchange rates and activity levels will be.

And regarding the case that concerns us, : in spite of the soundness and consistency of the macroeconomic base that its economy displays, it cannot claim to be invulnerable to the international turbulence.

Today has one of the highest levels of international reserve in its history, inflation is under control and the fiscal accounts maintain a constant relationship between debt and the Gross Domestic Product (GDP). Exports have shown record growth in the past couple of years, tripling their value since the year 2000.

“The Brazilian economy’s vulnerability could be tested in the case of the flow of capital being reversed” According to some analysts, the recipe for overcoming the crisis should include the preservation of some indicators, such as: controlled inflationary expectations, levels of investment in infrastructure, primary fiscal surplus and increase in revenue and consumption through greater employment.

However, as the United States opted to lower interest rates in order to stimulate activity, the Central Bank of Brazil made it clear in its last report that it can raise interest rates and the banks’ compulsive deposits, just in case it is necessary. If it were to do so, the effect on investment, employment and consumption would produce a significant reduction in the level of economic activity, and the Brazilian economy would suffer from the recessive effects of the international scene.

Finally, it is worthwhile to point out that the Brazilian economy’s vulnerability could be tested in the case of the flow of capital being reversed. Today Brazil receives an important flow of capital in the form of direct, as well as financial, investments, partly induced by the differential between the American and domestic interest rates. If an outflow were to be produced, forced by unfavorable expectations and international illiquidity, the consequences that it could have on the local economy should be seriously evaluated.