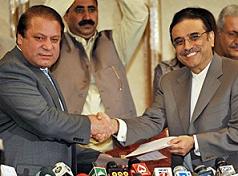 Pakistan’s fledgling PPP and PML-N led coalition government appears promising, yet it faces many challenges upon inception: primary problems like rising inflation, joblessness, the growing strength of Islamic radicals, poverty, and a wheat and electricity crisis; but also rewriting the constitution, ousting Musharraf and dealing with the deposed judges. Fearing that a direct confrontation between the coalition and Musharraf would serve to destabilize , the author timely reminds us of the adage politics is the art of compromise.

AFTER ALL OF THE VOTES from ’s February elections were tallied, the Pakistan People’s Party [1] (PPP) emerged with 120 seats in the National Assembly, whereas the Pakistan Muslim League [2] (PML-N) walked away with 90. After prolonged talks between Asif Ali Zardari [3], the leader of the PPP, and Nawaz Sharif [4], chief of the PML-N, the two parties reached an accord that stipulated that the two rival parties will cooperate together. In accordance with the agreement, the PPP and the PML-N are set to lead a coalition government that will also include the Awami National Party [5] (ANP) and Maulana Fazal’s JUIF. “Some fear that the new parliament may become so embroiled in the tasks of attempting to restore the judiciary and rewrite the constitution that it will have a time confronting the primary problems”

Specifically, the PPP would form the federal government with the PML-N as its junior partner, whereas the roles would be reversed in the Punjab.

The two parties are still working out the specifics of the new setup, and the coalition government will be formed shortly after Parliament convenes. The new National Assembly is expected to be sworn in next week, after which it is slated to elect a speaker. It has been decided that both the speaker and the deputy speaker will come from the PPP.

The much-awaited announcement of a new prime minister will most likely not come until after the new National Assembly’s first meeting.

HIGH HOPES, BUT LOTS OF PROBLEMS

The current situation has raised the spirits of the Pakistani people, who have high hopes that the new democratic government will restore some stability to their volatile country. However, some fear that the new parliament may become so embroiled in the tasks of attempting to restore the judiciary and rewrite the constitution that it will have a tough time confronting the primary problems, such as rising inflation, joblessness, the growing strength of Islamic radicals, poverty, and a wheat and electricity crisis. “Both the PML-N and the PPP want to control rising inflation and negotiate with the Islamic radicals”

Of course these are not the only problems that the coalition, which is the result of great public pressure, will face. For starters, President Musharraf remains a common enemy of the two main parties, albeit an increasingly isolated and weakened one. Also, history is not on the coalition’s side: Zulfiqar Ali Bhutto [6], who was prime minister from 1972-77, is the only civilian leader that the military has allowed to complete the five year term, and even he was executed shortly afterwards. Furthermore, Sharif himself, who once served as prime minister, was overthrown in 1999 by Musharraf, his army chief.

“The PML-N wants to oust Musharraf, but the party and its allies, which include the PPP, do not have enough votes in the Senate to do so” On the bright side, the two parties’ agendas are similar in that they both want to control rising inflation and negotiate with the Islamic radicals, instead of simply employing force against them like Musharraf has done. The PPP in particular is especially interested in curbing the violence caused by the Baloch separatists. They also agree on some minor issues, such as renaming the and asking the United Nations to conduct an investigation into Benazir Bhutto [7]‘s death. Furthermore, the new government will abolish the National Security Council, which grants the military a formal role in security policy.

However, the two parties differ on some matters. The PML-N wants to oust Musharraf, but the party and its allies, which include the PPP, do not have enough votes in the Senate to do so. Perhaps this is because the PPP is more conciliatory to Musharraf, who recently ordered a court to dismiss five graft charges against Zardari, which was seen as a gesture of goodwill on his part for the new leader of the PPP. Differences aside, the PML-N and the PPP leadership recently agreed to cooperate with the Charter of Democracy, which was signed by Sharif and Benazir Bhutto in 2006 while both politicians were in exile. Benazir, of course was later assassinated on December 27, 2007.

THE GHOSTS OF THE DEPOSED JUDGES

Ever since the passage of a constitutional amendment in 2002, the president has been allowed to dismiss Parliament and the prime minister; however, the cooperation agreement explicitly took away the president’s power to dissolve Parliament and appoint military chiefs. “The problem is that a direct confrontation between the PML-N–PPP coalition and Musharraf could throw Pakistan into greater chaos than it is already mired in” The agreement also states that the judges deposed by Musharraf on November 3, following the declaration of a state of emergency, are to be reinstated by a parliamentary resolution within 30 days of the new parliament’s convention. Parliament would then pass a law voiding the post-November 3 Supreme Court ruling that had legalized the dismissal of the judges.

The reinstatement of these judges to the Supreme Court and the High Courts would constitute a direct threat to President Musharraf because they could then rule unfavorably on the issue of Musharraf’s election as president. It has been widely argued that Musharraf’s re-election by the presidential Electoral College, which is composed of the national and provincial assemblies, was unconstitutional because he was also the army chief at the time. “Although a direct confrontation might actually be morally right, it would lead to the destabilization of Pakistan” If Parliament does indeed restore the judges, the Supreme Court will once again challenge Musharraf’s continued rule in court, and in all likelihood will rule against the president and his decision to declare a state of emergency.

The problem is that a direct confrontation between the PML-N–PPP coalition and Musharraf could throw into greater chaos than it is already mired in. Case in point: restoration of the ousted judges will create a problem for the sitting judges who replaced them. What will happen to these new judges? Will they lose their recently gained offices? Their removal would be unprecedented in ’s history. Meanwhile, it looks like the and still support President Musharraf, much to the ire of the Pakistani people. Furthermore, both countries oppose the re-instatement of Chief Justice Zulfiqar Ali Chaudhry, as he is considered soft on terrorism, the main concern of the two Western powers.

POLITICS: THE ART OF COMPROMISE

Politics is the art of compromise, and it is important that the new political leadership compromise with respect to the restoration of the judiciary and the removal of Musharraf. Although a direct confrontation might actually be morally right, it would lead to the destabilization of .

The recent terrorist bombings have shaken up the public, and people are concerned about their security and the dire economic conditions more than the fate of the higher judiciary and Musharraf, who has lost credibility and can be eased out of office at a later time. Hopefully, the new leadership is influenced in its decisions by the public’s aspirations, because responding to anything else would be a betrayal of the public mandate. Moreover, the whole world must lend a helping hand to ensure the success of the new civilian government because, quite simply, cannot make it on its own. Yet it must not fail under any circumstances, as that would cause severe repercussions throughout the entire region. At this hour, supporting the democratic cause is of utmost importance, and ’s friends must act now so that it does not fail during this crucial juncture in its history.