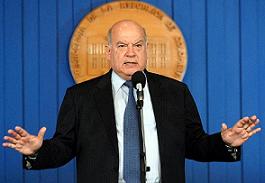 The Organization of the American States [OAS] was born to install peace and contribute to the development of the societies of the American Hemisphere. However, things changed and tension developed between the and . Nevertheless, the crisis between and has shown that problems are solved through international law and the will of Latin American leaders–a demonstration of multilateralism in the region that is a reason to celebrate, assures the author.

(From ) ON MARCH 17TH, THE OAS [1] approved a consensual resolution in attempts to solve the crisis between and . After 14 hours of deliberation, the Foreign Affairs ministers, gathered at the headquarters of the OAS, reached consent in rejecting the Colombian incursion into . Although Uribe’s administration was not condemned, as Correa was hoping, the principle was reaffirmed that a State’s territory is inviolable and cannot be an object of military occupation nor of any other measure of force from another State, directly or indirectly, regardless of motive, and even if it is only a temporary measure. These were the stipulations pushed in the special session of the Permanent Council of the OAS last 4th and 5th of March. The , which pushed for a similar condemnation of States that do not combat terrorism, remained isolated. “The JID is not the mechanism of military advising most adequate for promoting stability, developing governability, and contributing to peace and regional balance”

These decisions predict a rebirth of the OAS, which, nevertheless, runs the risk of falling again into its habitual immobilization. Already in 1991, the OAS embarked on a series of reforms with the end goal of adapting the institution to new times marked by the recovery of democracy and processes of regional integration which proved none too fruitful.

The OAS was born with the task of installing hemispheric peace and contributing to the development of the societies of the continent. However, the system was the reflection of tensions between the and , and instead of working towards Pan-American ideals, it proved ground for dispute between various Latin American territorial pretensions and the imposition of North American hegemony.

“The JID is not NATO, nor is it the OSCE” In argument with the article published by Safe Democracy that was written by the academic, Rafael Moreno Izquierdo [2], I first want to stress my agreement with Izquierdo in urgently constructing a specific mechanism for dialogue and transparency in the field of safety. As he points out, creating multilateral foundations to implement measures that guarantee a shared security is urgent. However, I dissent with regard to two points.

First, the Inter-American Defense Board (JID [3], in original Spanish) cannot fill the void of modernizing doctrine and military strategies. The JID, not only through the influence of the United States but also through its status as estate of military-to-military relations, avoided civil management, which could unite the policies of defense and safety. I“The consensus advanced by the River Group in the and reaffirmed in the OAS is the second example of preventative diplomacy, besides the initiative of the 2×9.”t is enough to remember that this military cooperation, over political regulations, strengthened Latin-American armed forces. These armed forces, imbued with doctrines of national safety, made attempts against citizens’ social and political freedoms.

This mechanism of military advising is not the most adequate for promoting stability, developing the governability, and contributing to peace and regional balance.

We are aware that the JID is not NATO [4] (the only example of Western diplomacy where a relatively equal representation of military and political objectives and points of view exists). Nor is it the OSCE [5], an organization promoting safety and cooperation in that is employed in 56 States. According to its home page, the OSCE aids stability, democracy, and prosperity by means of a political dialogue on the basis of shared values.

Continuing with my second critique, consensus was first reached in the presidents’ meeting in the River Group in , and reaffirmed in the OAS. This is the second example of preventive diplomacy and intuitive crisis management, joining the 2×9 initiative, the group of Latin-American countries that cooperated for a peaceful resolution in the Haitian crisis, a conflict which had many hurdles to overcome. “European countries have been more modern in their response to terrorism but have been anachronistic, and have used antiquated criteria, in carrying out the responsibility to protect”

Moreno Izquierdo says terrorist threats should be combatted at a supranational level. In the European agreement, the fight against terrorism is achieved through orchestrating United Nations resolutions, increasing tolerance and private sector participation (civil society and the business community), fighting against the financing of terrorism, and ostensibly improving the analysis of information.

The organisms of European security say nothing about military combat against terrorism in their own territory. As said last January 17th by the Ambassador Claudio Bisogniero [6], Vice-Secretary General of NATO, we all know military force is not sufficient to safeguard and promote safety.

THE RETURN TO INTERNATIONAL LAW, A CAUSE FOR CELEBRATION

On the other hand, embarking on military operations with military men that have a long tradition of respect for democratic institutions is not the same as it is with armed forces that have recently gained democratic control and are deficient in their abilities to combat a problem that has no military solution. Certainly, European countries have been more modern in their response to terrorism but have been anachronistic, and have used antiquated criteria, in carrying out the responsibility to protect. In 2005, the United Nations compromised and decided that they had the right to override sovereignty when a state government did not protect its people from genocide or massive violations of human rights.

Jose Miguel Insulza [7], the Secretary General of the OAS, said in the crisis between and that one must resort to international law, which is the only tool countries have to defend themselves. The will of Latin American leaders has been deferred to in order to find routes to repairing those links of confidence between the governments of Colombia and Ecuador which have turned out to be seriously affected, as stated in the resolution of the Twenty-fifth Meeting of Secretaries of State of the OAS.

More than a cause for critique, this moderate demonstration of multilateral good will is, in Latin-American history, a reason to celebrate.