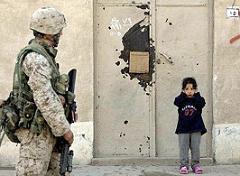 Recently, officials in , , and have claimed that, for ordinary Iraqis, the security situation has been improved by the surge in troops. However, the Iraqi people continue to suffer, with thousands dead, millions injured, and millions more displaced. What led to this anarchic situation and how can it be contained?

MANY DECISION-MAKERS IN PARIS, and point out that the surge in US troop numbers has improved the security situation of ordinary Iraqis. True, in the past few months terrorist bombings and the number of Iraqi casualties have declined in comparison to the same period in the past five years.

But Iraqis continue to die, albeit at a slower rate than before. Conservative estimates set the number of civilian deaths between 82.000 and 90.000 (Iraq Body Count [1]). Others put the figures much higher: between 650.000 (Lancet Study [2]) and 1,2 million (Opinion Research Business [3]). In addition, approximately 2 million Iraqis have been maimed and injured and over 2,2 million dispersed to other countries primarily to , and .

A quick mathematical deduction reveals that since the invasion one third of the overall Iraqi population were killed, maimed or forced to flee their homeland.

Even for the most purblind it should be evident that there is no viable equilibrium in the country. continues to be anarchic; “In an anarchic situation, where the state is incapable to exercise its monopoly of violence, ethnic affiliations become the main sources of security” not at least because the army and the police do not have the institutional outreach and authority to guarantee the security of the populace. Amidst this anarchic situation that grew out of an ill-conceived and incompetently managed occupation, a quasi-state has established itself under the leadership of Nuri al-Maliki [4]. It is a quasi state because al-Maliki’s government struggles to assert its sovereignty beyond the Green Zone [5], whose physical detachment from the rest of with fortified walls and rows and rows of barbwire symbolises the isolation of the country’s leadership.

The sovereignty of the Iraqi state is constrained because it can not exercise its monopoly of violence throughout the country; it is unable to guarantee its own security. This is exemplified by its support for a continued presence of US troops, of course. But it is also reflected in the recent invasion of the Kurdish areas in by the Turkish army in pursuit of the Kurdistan Workers’ Party (PKK [6]) rebels. The very fact that the Iraqi state could not avert a direct invasion by an outside force indicates its inability to secure its borders.

This lack of structural security and the absence of effective state institutions have exacerbated ethnic divisions. “The Mahdi Militia has strengthened its military and political capabilities in order to position itself at the centre of Iraqi politics after the occupation” In an anarchic situation, where the state is incapable to exercise its monopoly of violence, ethnic and tribal affiliations become the main sources of security and identification. Thus an ideational war of attrition becomes inevitable explaining why all stakeholders in the Iraqi polity are engaged in it: Shia groups with close ties to Iran, including the Mahdi [7] militia under the command of Moqtada al-Sadr [8]; some of the Sunni groups allied to al-Qaeda and partially financed by sympathisers in Saudi Arabia; and remnants of the Ba’thist dictatorship who have huddled together with al-Qaeda type parties in order to fight against the Shia militias, moderate Sunni groups, tribal leaders, the Kurdish factions, and the government of Nuri al-Maliki itself.

It should be noted that Al-Qaeda in Iraq and Ba’thist loyalists have been seriously weakened, because they failed to secure structural support amongst ordinary Iraqis and because they have been targeted by the US Army. Moqtada al-Sadr is playing a clever game here anticipating that the ceasefire agreement with the Coalition Forces (which he recently prolonged) will increase the pressure on Al-Qaeda in Iraq and Ba’thist loyalists. In the meantime, his Mahdi Militia has strengthened its military and political capabilities in order to position itself at the centre of Iraqi politics after the occupation.

The anarchic situation in is a direct outcome of the war and the inability of both the al-Maliki government and the Bush Administration to promote viable security structures within the country that would be strong enough to extend the sovereignty of the state beyond the Green Zone. “President Bush and Vice-President Cheney have repeatedly played the anti-Iranian card in order to rally regional states behind their foreign policy agenda” In light of these realities only the most ardent supporters of the invasion continue to deny that the Iraq war has been a disaster of historic proportions, both in terms of the ineffable terror it unleashed on the Iraqi people (in Falluja, in Abu Ghraib, in Haditha) and in terms of the US foreign policy agenda in the region and beyond.

They should note that most Iraqis continue to favour a complete troop withdrawal. In this sense the has already lost the war. It is also indicative that the current Iraqi government (as much as Hamid Karzai [9] in for that matter) has close ties to . On his recent visit to , President Ahmadinejad signed over a dozen agreements in the political, cultural and economic sectors. It is rather ironic that we are told that this is a negative development; that Iraqis should distrust Iranians; that the Persians have always betrayed the Arabs; that it would be better to rekindle the myth of endemic Persian-Arab enmity; that this would serve the balance of power in the region. Not unlike Saddam Hussein, President Bush and Vice-President Cheney have repeatedly played the anti-Iranian card in order to rally regional states behind their foreign policy agenda and to refocus the attention away from ’s occupation. “Trying to blame Iran for the dismal situation in Iraq may serve the purpose to sell further sanctions against the country to a reluctant international community” Yet thus far the policy has backfired, not at least because Arab and Muslim public opinion is reluctant to trade anti-Israeli sentiments with animosity towards Iran.

Indeed the more the United States demonizes Iran, the more opportunity it gives the Iranian state to capitalise on its opposition to US foreign policies in the region. Who doubts that in the case of a military showdown that would pit the United States and Israel against the Islamic Republic, the latter could easily mobilise Muslim and international public opinion behind it? Those who do are hard put to explain why Mahmoud Ahmadinejad has more supporters in , , , , and than he has in , and .

In my opinion trying to blame for the dismal situation in may serve the purpose to sell further sanctions against the country to a reluctant international community. But it does not address the sources of anarchy in which emerged out of the incorrigible decision to invade the country without an explicit UN mandate and without a viable post-war strategy to manage the occupation. Anarchy in was imported; it grew out of the incompetence of the Bush/Blair administrations. It is incredulously hypocritical to blame regional states for trying to contain the spill-over of the war after having invaded the country without an explicit international mandate. ’s cities and civilians have been bombed repeatedly by the PKK and fought an eight year war against Saddam Hussein at a time when he was the darling of the Reagan and Thatcher administrations. Both states must consider it to be in their national interest to contain the security threats emanating from the anarchic situation on their doorstep.

NO FUTURE STRATEGY FOR THE COUNTRY

“The Iraqi state can only extend its sovereignty in a situation where its legitimacy is accepted by the most important political constituencies” Yet the Bush administration remains intransigently oblivious to these regional parameters. What makes matters worse is that there is no future strategy for the country. The surge may have pacified some sections of , but there is no concerted political will behind it. Alleviating the security dilemma of the Iraqi quasi-state and extending its sovereignty requires a two tiered approach; Janus faced, in other words, one side addressing the internal security situation, the other side facing outwards towards the region.

The Iraqi state can only extend its sovereignty in a situation where its legitimacy is accepted by the most important political constituencies within the country. Currently this is not the case. The Kurds have extended their autonomy in , exemplified by their attempts to negotiate oil deals directly with international companies. “What is needed is an inclusive diplomatic campaign spearheaded by the United Nations, the European Union and the United States that would bring the major regional powers to the negotiating table” Sunni groups point to the sectarian nature of the government of Nuri al-Maliki that is primarily dominated by Shia parties. Only a campaign for national reconciliation under the supervision of the UN can tie the alienated factions to the political process and give them a shared stake in the future of the country; not at least because within such a context Iraqis could renegotiate what it means to be Iraqi in the first place.

The second tier needs to address the regional dimension of the conflict. There are too many stakeholders that are left out of the security equation. Paradoxically, , the ’ staunch ally in the Persian Gulf, currently does not even have an embassy in , while , the big bogeyman of the neo-conservative establishment in , has had several negotiations with the over the security situation in .

What is needed is an inclusive diplomatic campaign spearheaded by the United Nations, the European Union and the that would bring the major regional powers such as , , and to the negotiating table. This would extend the international bargaining power of the Iraqi quasi-state and increase its legitimacy in the wider Arab worlds. Ideally, it would seek to build on the smallest common security denominator that all stakeholders in the conflict can agree upon: preventing the disintegration of the Iraqi nation-state into three warring entities.

“The ultimate purpose of the current deliberations is to escape from the quagmire without losing face” Every Iraqi has the absolute right to accuse me of idealised armchair philosophising. I am aware that the reality on the ground for the millions of Iraqis directly affected by this atrocious war looks rather differently than from my office here at the SOAS [10]campus on in . But I would add that most decision-makers sitting in the State Department at Foggy Bottom, Washington DC, whose widely marketed job it has been to deliver liberty and democracy to the Iraqi people, are even farther away from the realities in the country, and, alas, increasingly so.

Decision-makers in the , Republican and Democratic, have learned something from the disaster in : foreign policies do not have to have a meaning, only a purpose. Whether it is the surge policy or the promise to withdraw US troops, the ultimate purpose of the current deliberations is to escape from the quagmire without losing face; to establish a context in which the war can be sold as a victory (Bush used the term three times in his recent speech on the five year anniversary of the invasion). Alas, nobody, apart from a few Iraqi intellectuals, seriously deliberates about a bold diplomatic initiative along the lines sketched above.

In the meantime as a nation-state and as an idea remains suspended. Unless there is a concerted international effort to reinvigorate it, the anarchic political culture in the country will continue to engender its own destructive dynamics. Mind you, it is within turbulent political periods far less anarchic than the Iraqi one, that the Hitlers, Stalins and Saddams of this world were born. It is only through a radical effort to alter the present situation, I am convinced, that the possibility might be preserved of a future in which writing the history of would no longer be an expression of sectarian loyalty or vulgar ideological allegiance.