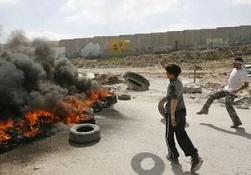 Strung up between radical and polarizing militant forces, a leadership lacking credibility, and a firmly rooted history of antagonism, the Israeli and Palestinian people face a strong and ever-escalating conflict. The author claims that few of those caught in the crossfire allow themselves to hope for an end in the near future. How does a peace so long desired, so diligently debated, find itself receding progressively farther from view?

(From Tel Aviv) FOREIGNERS, VISITING ISRAEL as the country fast approaches its 60th anniversary, discover a vibrant society with a bustling economy, vigorous high-tech industries and a metropolitan greater Tel Aviv with a dynamic, cultural, and artistic night life. Yet, many Israelis brood uneasily, worrying about the country’s future.

Although in their gut they sense that cannot survive in peace unless it and its neighbours are convinced as to the might of its military, they also recognize that is obligated for both moral and political reasons to strive for a settlement with its neighbours and to make accordingly the necessary compromises to reach such a peace. In practical terms, though, it would appear that they have not yet developed the mechanism that will move them towards achieving this aim. “There is a clear distrust in what the Israeli leaders say about their intent to move towards peace”

Indeed, there are no signs that we, Israelis, have even begun to address how to resolve the core of the conflict. At a pace that has been escalating in the past generation, we sense that in the Palestinian school books and messages of the Imams, Israelis are described as Satan-sent occupiers, aliens to be uprooted who desecrate holy Moslem sites. At the same time, many Israelis view the Palestinians as a threat that can be trodden upon and destroyed not least because they will not accept the inalienable right of to exist.

“There is no evidence whatsoever that this hostility has already climaxed” The sporadic suicide bombers, the mines and ambushes, the seemingly endless lobbing of mortars and Katiusha missiles out of the Gaza Strip, and the Israeli reprisals that cause even more casualties among the indigenous Arab population there are an escalated expression of just how hopeless the confrontation has become.

There is a clear distrust in what the Israeli leaders say about their intent to move towards peace. The high hopes some had in the aftermath of the December Annapolis gathering have completely dissipated. One gets the impression that those at the helm, Israelis, Palestinians and other Arabs and friendly leaders overseas have no idea how to escape from out of the abyss we find ourselves to be in.

“This antagonism from Israelis towards the Palestinians that appears to dominate so many Israelis should cause concern to all who seek peace” There is no evidence whatsoever that this hostility has already climaxed. On the contrary, it is as if we have all but despaired that peace can be achieved. The platforms of the Jewish political parties in recent years have not included peace as an object to be attained, nor have they included suggestions as to how that peace could be reached, as the majority of the nation’s population has all but given up hope that the generation-long conflict between the Palestinians and the Israelis will end in the foreseeable future.

Not less worrying, the majority of present-day Israelis, following the prevailingly abrasive anti-Arab and Palestinian media reports, express hostility and distrust towards them, and question whether it is at all possible to negotiate with them. It is this antagonism towards the Palestinians that appears to dominate so many Israelis –and especially the politicians– that should cause concern to all who seek peace.

A RANCOUR THAT WAS NOT ALWAYS SO

“Israelis believed that no Arab leader would dare reach an accommodation with ” Yet when driving in the region, few words used are more common both by Palestinians and Israelis than peace, solh, salaam or shalom. Restaurants and eateries are so called, commodities are so labelled, yet few stop to think of their meaning.

This rancour was not always so. While the majority never seriously considered seeking means of coexistence, there was a time when far fewer Jews formed the Yishuv [1], and when the majority of them had in their daily life a limited intercourse with Palestinians, showing far less physical enmity towards the much larger Palestinian population.

“This abhorrence of the Palestinians increased greatly with the wave of immigrants that began in 1989 from the erstwhile Soviet Union” There are some events that show that failed to seize opportunities to make peace in its first thirty years. Israelis believed that no Arab leader would dare reach an accommodation with . The first breakthrough came when President Sadat flew to late in 1977, followed shortly thereafter by the peace treaty with which changed that sense of certainty. Another sixteen years passed before the Oslo Accord [2] and the peace treaty signed with King Hussein of one year later.

But there were significant numbers of radical right wing Jews who felt uncomfortable with the potential hopes for a settlement and the compromises these entailed. In the aftermath of the Six Day War [3], over forty years ago, with the aggressive West Bank settlement policy, there was a sharp increase in the physically manifested hatred, with Palestinians against Israelis and possibly even to a greater extent with that of Jews against Arabs.

Parallel to the various signs coming from both the Palestinians and the Arab leadership, not least from the Saudis, many suspicious Israelis found that these understandings questioned, and indeed posed a threat to, their anti-Arab prejudices. Supported by the Haredi [4] right wing ultra-orthodox Jews, this abhorrence of the Palestinians increased greatly with the wave of immigrants that began in 1989 from the erstwhile . “Palestinians were most of the time just as negative as Israelis and made no real effort to reach an understanding with their Jewish counterparts”

never seriously made an effort to understand the concerns of the Palestinians. Possibly excepting the events during the period relating to the 1993 Oslo Accord, the Israeli leadership, realizing that to talk with their perceived enemies inevitably called for compromises, never seriously pursued opportunities to negotiate with the Palestinians. To date there are no signs that they comprehend that until they recognize the Palestinians as potential and equitable partners, with similarly respected rights, there will be no end to the continuing escalation.

Presently, this enmity is far from passive. It is probably most acutely expressed in the behaviour of the military and police, who repeatedly humiliate, and at times torture (once an unthinkable deed but now a common occurrence), treating Palestinians with a disregard to basic human rights. Today, a significant percentage of Israelis do not believe that peace is attainably and are certainly not conditioned to the compromises necessary for any reasonable settlement. Matching the Israelis, although their tactics have been different, the Palestinians were most of the time just as negative and made no real effort to reach an understanding with their Jewish counterparts. On both sides, the radical forces are those who set the direction as they draw the leadership to overreact.

A SERIOUS ABSENCE OF LEADERSHIP IN BOTH SIDES

“It is sad to surmise that in the coming years, students of history will confirm that Israel repeatedly missed opportunities to make peace” What is more difficult to accept is that, should the Israelis have chosen a more positive track, the Palestinians might not be easier partners to work with. Unlike the pre-state Jewish Yisuv, in the aftermath of World War I and the advent of the British rule over , the Palestinians never invested in setting up the basic structure of an administration, nor did they develop a strategy as to how to strive for peace with . Had they done so, one might expect that it might have been followed by a greater effort to communicate with the Israelis.

It is worrying that both sides are experiencing a serious absence of leadership. Those in office lack credibility and neither party has a senior politician who has the determination and charisma necessary in gathering support and initiating steps to end the stalemate. Probably, with the passage of time, the challenges to any change in course have become even greater.

It is sad to surmise that in the coming years, students of history will confirm that repeatedly missed opportunities to make peace. But in spite of the conflict’s tragic history, we should be more than ever committed to the fact that it is imperative that a way be found to change course, end the impasse, and make peace.