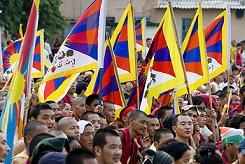 The confrontation between Tibetan protesters and Chinese troops is simply a violent reminder of a long-established tendency towards coercive and expansionist policies of , the author argues. Is it any wonder that, given such a history, the international response to this most recent crisis has been underwhelming?

(From ) WHEN BJORK MADE THE IMPROMPTU rally on stage and shouted, , during a show in , people shrugged it off as another foolish stunt by the eccentric singer from known for her outrageous dresses and fashion styles. But after Chinese authorities violently crushed the protest by Buddhist monks and Tibetans on March 14 in , suddenly Bjork seems to have gotten it right.

Chinese officials estimated the number of dead between 10 to 14, and some accounts put this number as high as 80 people. However, it is virtually impossible to know the accurate figure or to determine exactly what happened, as expectedly sealed from foreign journalists and expelled most tourists present at the time. has ruled since invading the Himalayan region in 1950, and considers it an inseparable part of . “The crackdown exposed that is still operating under a closed mindset, that it won’t tolerate criticisms and dissent”

However, the violent crackdown on protesters in brings back memories of the 1989 tragedy of , where some 2.000 marchers were killed, or massacred, as some prefer to say. Moreover, it again reinforces the long-held suspicions over , which was long considered a neighborhood bully (often threatening to use its military strength) before its rapid rise as an economic giant. The crackdown exposed that is still operating under a closed mindset, that it won’t tolerate criticisms and dissent, that it does not provide exact information, that the media is free only so long as it reports according to what the government wants, and that this same government is quick to dole out punishment.

The issue is just one of the many obscured by the economic expansion of , as Western powers have seemed ever more reluctant to criticized the Asian giant. What is frightening is the prospect that this could embolden to resort to iron fist diplomacy at every opportunity and to ignore tame international criticism. “One Chinese political specialist in ’s actions with those taken in the American West during the 19th century, when the expanded its territory, disturbing indigenous populations and diluting their traditional ways” compared

This should alarm , whose relationship with has always been sensitive. The government considers the renegade state, like , to be part of , and is ready to throw its might against any move to declare ’s independence. The same can also be said with regard to Hong Kong, which has so far obtained some measure of autonomy in managing its affairs, as agreed upon during the handover by almost 11 years ago. The territory’s officials, however, are careful not to offend politicians from the mainland, as it is difficult to say how they would react even to the slightest criticisms.

One Chinese political specialist in Beijing compared China’s actions with those taken in the American West during the 19th century, when the US expanded its territory, disturbing indigenous populations and diluting their traditional ways. “Who makes the gold makes the rules, and China has gotten its hands on minerals that it needs through such strategic deals”However, ’s aggressive forays stretch beyond its boundaries even as far as the disputed near the . For decades it has bullied its ASEAN [1] neighbours on the Spratly issue, claiming as its own this group of islands believed to be rich in oil and gas deposits. has already expressed displeasure over the ’ attempt to define its maritime borders, which include the Kalayaan group of islands, Scarborough Shoal, and the waters off Zambales province, and it has threatened economic retaliation and severance of ties, despite the fact the mentioned islands are quite far from mainland and just within the ’ territory. has also had skirmishes with over the , which it took by force in 1974.

“ is now an increasingly major investor and importer of goods. It has already overtaken the US in many Asian countries, including Japan, as the largest trade partner” With its staggering dollar reserves around $1,5 trillion, China is using this clout to its advantage, putting countries under its spell and reviving what some analysts liken to the ancient Chinese tributary system which was begun during the Ming dynasty [2]. The idea was that the Chinese emperor would give favours to the tributary states, and that such generosity would earn him the goodwill, support and cooperation necessary to strengthen ’s presence. Indeed, has gotten its hands on minerals that it needs through such strategic deals. In other words, he who makes the gold makes the rules.

is now an increasingly major investor and importer of goods. It has already overtaken the in many Asian countries, including , as the largest trade partner. Also, it is using its dollar hoard to shower loans and aid. Its presence can be felt not just in ASEAN and Pacific countries but in other regions as well, such as the Middle East, and South American.

The have already received tremendous funding from for various infrastructure projects, including the highly controversial ZTE broadband network deal, which has, on account of corruption charges, plunged the administration of President Gloria Arroyo [3] into its worst crisis to date. If figures quoted in the press are true, then the is already indebted to by about $8 billion.

It is no wonder that many countries are paying lip service to what is happening in .