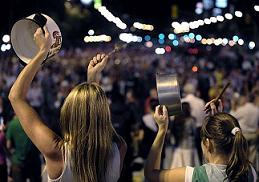 The Argentinean government is in a squeeze: with the intention of brutally increasing soy retentions, their principal export product, they disturb the scaffolding of the spectacular economic growth registered in the last five years. The conflict between the Government of Cristina Fernandez de Kirchner and the field has exploded. Understand why.

(From ) IT IS COMMONPLACE TO INDICATE that the spectacular growth of the Argentine economy in the last five years (its rise was as spectacular as its fall at the beginning of the present decade) is principally owed to the increase of the international prices of the raw materials, food, and to the soybean boom. The increase is similar to the wheat and meats economic boom for of the agroexportation model one century ago.

“The agricultural producers are becoming more angry in response to what they define as voracity of an inebriated Government of agricultural dollars” The simplicity of the analysis has brought critics and enthusiasts to assign to the magical soy the luck of the golden calf for the national government, a source of revenue which would assure, through retentions to the agro exports, fiscal surplus and an abundant remainder in the State’s strongboxes for subsidiary policies–redistributive measures at times qualified contemptuously as populist.

In other times, this was called having the cow tied, comparable to the hen with golden eggs. But something has changed recently and even though it is premature to confirm, some believe that agro retentions, as the principal tool of economic politics, have entered in a forced and irreversible revision.

SYNOPSIS OF THE FACTS

“The estimated collection with the successive retentions of the government would turn 4,500 million dollars from the past year to 12,000 million in 2008” The agricultural analysts explain that already there is a worrying impact, like the halt in the sector’s investment and the reaction of the manufacturers of agricultural machinery, the first industrial segment that pulled out after the crisis of 2002. The agricultural producers are becoming more angry in response to what they define the voracity of an inebriated Government of agricultural dollars.

When the crisis of 2002 took place, resulting in convertibility, the collapse of the financial system, and the devaluation of the peso, the crop was growing four million tons per year. In response to the dollar stampede, the agro should have put a part of the production in the strongboxes of the State. First they asked for 10 per cent, which immediately went to 20 per cent. Afterwards, it appeared to be an emergency. But the situation began to improve and the reactivation had in the field one of its fundamental actors, with producers buying drills, trucks, and blenders. The emergency worsened, but the retentions were maintained.

“United by the clash with the official politics, the producers have united and now prolong unemployment for an indeterminate time” To the argument for the need for currencies was added the need to stop inflation. To take care of the index, the retentions increased for meat and dairy, and the exportation of both was ended. The differential retentions appeared and the retentions rose from 20 to 27 per cent. As a last measure of his government, Néstor Kirchner applied another increase, taking them to 35 per cent. Three months later, the government of Cristina announced a new adjustment, elevating them to 44 percent with the explicit objective of stopping the focus on the soy market. The estimated collection with this increase would carry 4,500 million dollars from the past year to 12,000 million in 2008.

CRISTINA: I AM NOT GOING TO SUBMIT TO EXTORTION

“March 25th joins the history of protests that populate the troubled recent history of ” It was the straw that broke the camel’s back: the ruralist entities, representatives of historically different and conflicting sectors of the field, protested as a whole. The ruralist entities answered the methodologies of the pricks in the streets. United by the clash with official politics, the producers there have been brought together in the borders and now prolong the strike for an undefined period of time. President Kirchner answered harshly, remarking that the rural sector has had the most profitability since 2001 in this part. She spoke of the damage of abundance and added: I will not submit to any extortion. Hereby, even more distance was created with the rural leaders, and the climate is set on edge these days.

“The reindustrialization and the improvement in life conditions of the population advise maintaining the current base of different types of changes” March 25th joins the history of protests that populate the troubled recent history of .

The estimation is that the rope has been tightened too much and a complex and unnecessary conflict front opened that impacts society in two negative ways: shortage of supplies of basic products in the gondolas and inflationary rebound. As graphically indicated by Hector Huergo, an agricultural specialist of the Rural Supplement of the Argentine diary Clarín, the Government gave one more turn, and the situation fell apart. Now it is in a phenomenal squeeze: with the attempt to brutally raise soybean retentions, it puts at risk the whole scaffolding on which the economic recovery of the country was based.

THE AGRO-INDUSTRIAL SECTOR AS A FACTOR OF TECHNOLOGICAL INNOVATION

But what exists as background is the absence of an explicit model of medium-term productive development that explains the participation of the agro-industrial sector as dynamic factor of technological innovation. “The level of external protection according to a strategy of industrial development, for the own characteristics of the Argentine economy, cannot rest only in the type of change” The recovery of the industrial fabric demands not only of a type of change that allows it to compete, but also of a mass of wealth that could be destined for the increase of productive investment. Research from the of for Argentine Development, Agrarian Revenue and Extraordinary Earnings in Argentina, 1990-2003 [1] of Javier Rodríguez and Nicolás Arceo, indicates certain information. Reindustrialization and improvement in living conditions of the population advise to support the current scheme of the type of differential changes, and include increase in the retentions to exportation of agricultural products located at present in the level lower than the last 15 years.

It happens that the level of external protection, according to a strategy of industrial development, for the own characteristics of the Argentine economy, cannot rest only in the type of change. His complement, according to this perspective, is the application of policies that allow the evolution to free the investment in the industrial sector of the type of change of short and medium term.

Immediately, in all forms, Kirchner has a great challenge in front of her, the 101st day of her government, in which the falling in love has gotten lost with society.