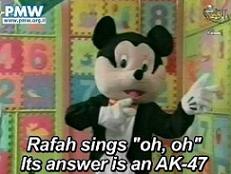 In spite of the conciliatory tone of the Palestinian President, Mahmoud Abbas, other types of anti-Semitic messages reach the Palestinian population through the media. This is a direct problem for , but, above all, it is a worrying phenomenon for the Palestinian society that claims it deserves an independent state. An independence that should include the managing of a good education system, maintains the author.

(From ) THE BLOODY CONFLICT BETWEEN Israelis and Palestinians is not at the point of being resolved. Even if the United States Secretary of State, Condoleezza Rice, actually has motives for having resumed her visit to the region in an optimistic tone, there would not be a settlement. Including if there were an agreement that now seemed more achievable than before, it would not equal a solution to the conflict.

The real solution will not arrive only when there is a signed agreement. Recognition of rights will cement in practice when the Palestinians feel their ambitions for independence are converted into a new life and cease being a mere declaration, and also when Palestinians end their sentiment of hatred toward Israel and Israel can live securely, without attacks and with an end to hate against their people and their own existence.

YOUR DESTINY, BECOME A MARTYR!

“In Western terms, this content would clearly be translated into a call to perpetuate suicide attacks” It will be difficult to succeed in solving the problem while Hamas’s Al-Aksa continues to air television programs for children that are filled with hatred and glorify death, as martyrs, in the name of Allah. In these programs, the theme is not just , but rather the Western world, and the world in general.

Since May of last year, a rat that looks like Mickey Mouse, named Farfur, was the first of this type of programming. Hamas transmitted the television show. Farfur presented radical messages against in front of the kids. In the final chapter, Farfur was murdered by an Israeli, which was announced by Sharaa, a girl who led the program, to all the small viewers. “One does not speak about Israelis but about Jews, which demonstrates that this topic is more dangerous and deep” The consolation was that Farfur was a martyr and rose into the sky. When Farfur already was dead, the message continued in the air.

In the central program for children, the little girl in charge of directing the show, covered in traditional Islamic clothing, although without veil, one day received a call from a boy that was communicating with the studio. Oh children! Take action! Our destiny is one, to become martyrs for Allah! In Western terms, this translates clearly into a call to perpetuate suicide attacks.

“The rabbit, Assud, promised to finish off the Jews and eat them” In the same program, a nine-year-old girl named Shahad called and said that she wanted to share with everyone a Hadith (a story related to the life of the prophet Mohammad, shared in oral tradition). The prophet said: The Resurrection will not happen while we do not fight the Jews…not even just the Israelis, but the Jews. This demonstrates that the topic here is not the borders with and occupied territories, but more dangerous and deep.

Later, the rabbit, Assud, promised to finish off the Jews and eat them. Then, puppets appeared on the show. A Muslim child (the small puppet), killed the biggest puppet, which represented the President of the , George W. Bush.

AGAINST A SERIES OF VALUES

It is not a desperate orphan boy, but rather a symbol of the war between civilizations. When Bush calls to his guards, the boy, laughing, responds, There are no guards, oh Bush, your village (or it could also be people), has given itself up.

“An academic book, written by Al Fatah educators and aimed at children of ages 13 to 14 years, explicitly glorifies death, alleging that the enemies are those who adore life”

When Bush invites the boy to the White House and promises to give him whatever he wants, the boy responds laughing, The White House has been changed into a great mosque for the Islamic nation and for Muslims. And then the boy kills him.

June 18th, 2007, a few days after Hamas took power in , the Palestinian journalist Ghassan Zaqtan wrote in the Palestinian Authority’s newspaper, Al-Ayyam, a critique of the new government. We knew they would do it, especially in , where a mother brushes the hair of her son at 7:00 a.m. so that he may die at 7:30 a.m.; in , where children learn that death is preferable to life! We knew that they would do it, it was clear: the language was replete with rhetoric of death and killing procedures, with fatwas (religious edicts) every Friday and parties, and with sermons.

The crass mistake of the journalist is that he only seems to attribute the culture of death to Hamas. Al Fatah’s leadership and education promotes the idea that death is preferable to life, affirms Itamar Marcus (the organization’s director) and Barbara Crook.

They give concrete examples, like that of a school book text written by educators of Al Fatah and destined to 13 and 14-year-old children, where death is glorified and it is stated that the enemies are those who adore life.

EDUCATION TO BE A MARTYR

In the book, and Texts, Part II, for the eighth grade in school and edited in 2002, there is a poem that goes as follows:

Oh heroes, Allah has promised you victory…Your enemies long for life while you long for death. They search to…fill their empty stomachs while you long for as broad as the heavens and the earth…These drops of blood spilt from our bodies will be transformed tomorrow into hot red meteors that will fall over the heads of our enemies.

The Director of the Association to Help Palestinian Children, Firial Hillis, is quoted in a report from the Palestinian Media Watch that shows that martyrdom constitutes an official part of education.

For him (the child), the concept of martyrdom signifies belonging to the Fatherland, from a religious point of view. It is a sacrifice for the fatherland. Martyrdom to arrive at and to be found with God is the best. We also teach our children to protect the country, to take part in martyrdom, said the Palestinian television official May 4, 2003.

“‘The Israelis were the ones that committed the Holocaust’, said a Palestinian actor in a television program for children”But the problem (in that which martyrology education, or rather, suicide by violent means, goes in hand with the dissemination of hate) has not ended. Now, Holocaust commercials are being used.

In March of 2004, the Palestinian television controlled by Al Fatah had put child actors in a scene as dead people in a musical number, while at the bottom, ovens and crematoriums are seen. An actor states that the Israelis are the ones that committed the Holocaust. They opened the ovens to cook human beings…and when the oven stopped burning, they turned on hundreds more. Now, only a few days ago, they returned to the horrendous commercial.

According to the article published March 20th, 2008, in the Palestinian newspaper Al Ayyam, the National Defense Committee of Holocaust Children began its activities with an exposition. The exposition included a large oven in which children burned.

Another worrying example comes from approximately one month ago. There was an attack in which a Palestinian of the Jabel Mukaber neighborhood of eastern killed eight students (one 26 year old and the remainder between ages 14 and 19) in a rabbinical seminar in . The sacred texts the rabbinical students were reading remained bloodstained.

“The assailant and its action are glorified and presented in positive terms” The newspaper Al Hayat al Jadida is an official organ of the Palestinian Authority. The paper used a well known, affectionate term (boyfriend) to refer to the terrorist and referred to the funeral as a wedding-like celebration. The background is the concept of the encounter between the martyr and the 72 virgins that, according to the Islamic tradition, await him in .

With all of this, the attacker and his actions are glorified and presented in positive terms. Even though it is not explicitly called a murder, the message is clear because they praise who did it. This is all in spite of the fact that Mahmoud Abbas’s declared position has been favorable to negotiation with and progress toward peace. The message has been repeated before Palestinian ears, not just the Israelis. However, the messages that continue to disseminate through the mass media are completely different, and more than problematic.

The examples are innumerable and worrying. They are a direct problem for . But we consider that they are, above all, a worrying phenomenon for the Palestinian society that demands an independent state. Its independence should also include the managing of a good education system.

What is here described should change at its base, so the educational system can contribute to a better life for Palestinian children. The end of the Israeli occupation will not suffice to guarantee it.