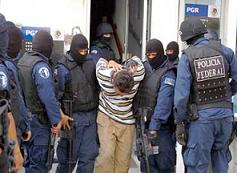 Many Mexican citizens have resigned themselves to accept insecurity as something inevitable due to the inability (or the corruption) of the police and judges with regards to the control of drug trafficking and organized delinquency. The Calderón government only manages to tackle occasional skirmishes against the local mafia, affirms the author.

LIKE THE GREAT MAJORITY of Latin-American countries, has short, medium, and long-term challenges. But, perhaps, the most important challenge, together with alleviating poverty, is the shoring of some of its basic institutions.

The infiltration of drug trafficking and organized delinquency in the State apparatus and the corruption of an important sector of the government, including numerous policemen and judges, “The stand out organized crime is at its haunches in key zones of the territory” are undermining the foundations of a system that never completely adopted democracy.

The last efforts at purifying the security forces have been too short and in some cases counterproductive, as many policemen expelled from the force have gone to join the ranks delinquency, putting their experience and knowledge to work for the drug cartels.

RECONSTRUCTION OF THE INSTITUTIONAL NETWORK

The daily unpunished executions of policemen and civilians are the manifested test of organized crime at its haunches in key zones of Mexican territory. “The deadlock of corruption and the lack of resources impedes the ventilation of some of the most contaminated chambers in the state”

The cartels work in localized geographic sections that are not extensive, but this violence is extremely visible to the citizens. The Mexican state has used every institutional resource, including the Army, to recover these territories. On this base, what is needed is a deep reconstruction of the institutional and instrumental network, which today is insufficient. A reform of the justice system must also be carried out to efficiently face this phenomenon of violence, admits the Attorney General, Eduardo Medina Mora.

The reconstruction of the institutional framework to which the Mexican security refers is a work that is as difficult as it is complex.

Farther from the motivation of pecuniary rewards, which bring drug lords a stone’s-throw from the largest market for drug consumption in the world (the United States), the Mexican authorities have been unable until now to complete the judicial and police reform that would permit the progressive reparation of some of the most vulnerable institutions of the North American country.

The encystment of the corruption and the lack of resources impede the repair of some of the most corrupt chambers of the state. The chambers of state in turn facilitate the maneuvers of an organized delinquency that intimidates, kidnaps, and executes with a worrying frequency and efficiency.

Violent actions are also produced through rivalry between distinct criminal organizations which, in the full light of day, fight over influences, profits, and cultivation in . “More than one expert has pointed out that the resurrection of security in must happen in conjunction with the dismantlement of police corporations”

We live in a in a critical moment. These groups of drug traffickers, among them Mexicans and others in the region, have acquired a lot of power in the past years, since the United States closed the tradition Caribbean route and the flow of drugs changed to the Central American and Mexican corridor, recognizes Medina Mora.

Many Mexican citizens have resigned themselves to the idea that insecurity is inevitable. For the moment, the government of Felipe Calderón is only able to put up skirmishes against the local mafia, which has more than enough material and human resources to offset these occasional offensives.

More than one expert has pointed out that the resurrection of security in Mexico will happen with the dismantlement of the police corporations, including the powerful PGR. But this recycling would implicate an extraordinary investment of energy and cash on behalf of a state that has too many open fronts. From the misery that concerns a good part of the population to a dependence on an oil that is becoming scarce, the Mexican government currently has too many worries to be involved in a final offensive against delinquency at home and abroad.