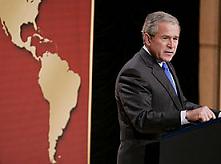 All indications are that, beginning in November, the scale of diplomatic relations between the and will increase. Although each has a different point of view, the three presidential candidates agree that should pay more attention to Latin-American countries if it wants to influence the region.

(From ) BEFORE THE TERRORIST ATTACKS of 9/11, the President of the , George Bush, had announced in his public addresses that he was going to pay special attention to Latin-American countries. However, in the wake of the fateful attacks, paid little or no attention to its neighbors to the south in the , except in rare exceptions. Its gaze was, and is, locked on other continents.

Today the race for the White House takes the economy, the war, and terrorism as the campaign’s central points. “Brazil, Argentina, Chile, Mexico and Colombia are the countries that the presidential candidates have in mind for political and economic cooperation” Nevertheless, relations between the United States and Latin America have come to occupy a place in the candidates’ discourse, and the subject is held in consideration by their teams and advisors in the political exterior. Barack Obama, Hillary Clinton and John McCain have already pressed forward with some general lines concerning the possible nature of relations with those neighbours to the south, thinking of the presidency but also keeping in mind the millions of latino votes necessary to win the primaries.

What remains clear for the three candidates is that the should renovate and revitalize its relations with . , and , in addition to and , are the countries that the Republican and Democratic candidates alike have in mind, as a priority, for economic and political cooperation. There are others, but they are on the waiting list.

During the Bush Administration, fear of terrorism was converted into the dominant theme of relations with countries in the region. Islamic terrorism occupied the agenda at the expense of discussion of inequality, poverty, and social justice–matters as yet unresolved by successive Latin-American governments. This is what the three candidates, in varying degrees, wish to change if they manage to climb to the White House. As long as they don’t toss these themes aside, they are inclined to make a further step in relations in order to add to the agenda those scourges which the region has not managed to overcome.

OBAMA’S ADVISERS AND THEIR INNOVATIVE PROPOSALS

The democrat Barack Obama, who would be willing to negotiate with the regime of Raúl Castro, is the candidate who has proposed the most innovative measures for the region. “Greg Craig, criticizing Bush’s errors with regards to the region, advocated the naming of an adviser to the President for Latin America” He is advised by the professor Riordan Roett [1], director of Studies of the Western Hemisphere and the program of Latin American Studies in the School of Advanced International Studies at the University of Johns Hopkins. Obama is also supported by Anthony Lake [2] and Zbeigniew Brzezinski [3] (ex-National Security Advisers to Bill Clinton), accompanied by Susan Rice [4], ex-collaborator of Madeleine Albright [5], and Greg Craig [6], ex-defender of president Clinton in the Lewinsky scandal. The group also includes the governor of , the hispanic Bill Richardson [7], who is seen as a potential Secretary of State in an eventual Democratic government.

For , it is necessary to create a new alliance to achieve progress in the region, in the manner of John F. Kennedy four decades ago, as a means of bringing together the with its neighbors. He also thinks it necessary for to change its politics with regards to the government of Chávez. “Craig asked that the next administration give more consideration to Latin America, travel more to the region, speak with more Latin Americans, and, above all, listen to them” This former Clinton man, of Mexican origin, did not overlook his countrymen living in the United States, and insisted on various forums to provide the country with a new immigration law which would contribute to solutions for the 12 million undocumented immigrants who currently reside in the northern giant, while at the same time promising to secure the border.

Greg Craig, criticizing Bush’s errors with regards to the region, advocated the naming of an adviser to the President for . The next president should designate a nationally known political director; someone who is close to the law and therefore appropriate as the daily face of politics with , explained the adviser. Craig asked that the next administration give more consideration to , travel more to the region, speak with more Latin Americans, and, above all, listen to them. Along the same lines, he recommended that the government stop telling Latin Americans what to do, and asked for more support for improved social justice.

To lift those measures adopted by Bush in 2004 which reinforced the embargo against , such as limits on the delivery of consignments or on number of visits to the island allowed to Cuban Americans, is among the initiatives which Obama’s team is already pushing.

Hillary Clinton is aided in these subjects by Julia E. Sweig [8], director of the program of Latin American Studies of the Council on Foreign Relations, and Arturo Valenzuela [9], director of the Latin American Studies program at . She also has, among her principle advisers, the ex-Secretary of State Madeleine Albright and Richard Holbrooke [10], ex-ambassador to the United Nations, who is her primary expert in the area of Foreign Affairs. “The former First Lady is in favor of strengthening relations and strategic cooperation with South American countries”

The should strengthen its program of cooperation with Latin America in order to slow down the deterioration of democracy in a key region which has abandoned, thinks the candidate, who spared no criticisms with regards to the government of Hugo Chávez.

Senator Clinton understands that should reinforce ties with and , in addition to and other allies, where the Bush administration has overlooked those neighbors to the South. The former First Lady is also in favor of strengthening relations and strategic cooperation with South American countries.

McCAIN DISASSOCIATES HIMSELF FROM BUSH

“According to McCain, relations between the United States and Latin America should be guided by mutual respect and not by imperial impulses or anti-American demagogy” John McCain, winner of the Republican nomination, is advised by Otto Reich [11], former assistant to the Secretary of State for Hemisphere Affairs. However, it is probable that this team is joined by some of the experts who supported Mitt Romney [12], like Roger Noriega [13], former ambassador to the Organization of American States, and Manuel Rocha [14], a diplomat who was an ambassador in Bolivia and who held various posts in representing the United States in Mexico, the Dominican Republic and the Office of Cuban Affairs.

Relations between the and Latin America should be guided by mutual respect and not by imperial impulses or anti-American demagogy, claims the republican candidate, who at once subtly disassociates himself from Bush without hesitating in harshly criticizing the regimes in and . “The three candidates need the Latino vote in order to win”

Today, Latin America is more and more vital to the success of the , according to to McCain’s advisers. McCain says that the Latin American countries are the natural partners of the , and of .

The could and should be a model for new relations between the north and south in the 21st century. McCain believes that ours could be the first completely democratic continent, where commerce is free across borders, where respect of the law and the power of the free market provides security and prosperity for all.

THE IMPORTANCE OF THE LATINO VOTE

The importance of advancing general lines about future relations between and is by no means minor. The three candidates need the Latino vote in order to win.

Latinos will have an important role in the elections of next November 4th, primarily in the southeastern states such as New Mexico, Arizona, Colorado and Nevada–all of which were won in 2004 by the current Republican president, who achieved in that year a record of more than 40 percent of the Latino vote. “His favorable position towards the regularization of immigrants could allow McCain to recover part of the Hispanic vote lost by his party”

Since then, the Republicans lost the ground won by Bush among the country’s most important minority–with close to 45 million people. This loss was due to the harsh tone of the party’s most conservative sector in its opposition to the reform of immigration law which McCain himself had supported.

The senator from , who now has launched publicity in Spanish, backed certain reform projects which would have regularized the great majority of the estimated 12 million undocumented immigrants who currently live in the –projects that were blocked in the Congress of 2006 and 2007 by the opposition of the most conservative Republicans. “, , and will be puzzles for the next administration’s State Department”

His favorable position towards the regularization of immigrants could allow McCain to recover part of the Hispanic vote lost by his party and edge out Obama and Clinton in key southwestern states. However, he will not be in a comfortable position, after having hardened his discourse in the last few months over immigration in order to achieve the backing of conservatives in the primaries. This difficult balance could turn out to be favorable for the Democrats, especially for Senator Hillary Clinton, who has substantially won the Latino vote within her party.

INFLUENCING IN ORDER TO LEAD

The Free Trade Agreements pushed by the Bush administration and opposed by unions have yet to be defined within the future relations between the and . Among other unresolved matters is the lure of a fixed seat in the United Nations Security Council for Latin American or nations, possibly on a rotating basis, as proposed by some Democratic advisers.

The governments of , , and will also be a puzzle for the next administration’s State Department, in a continent in which progressive sectors have triumphed in many countries, and where the old leftist radical groups and their syndicates have no interest in political or economic relations with . All this is additionally tinted by the repercussions that the real estate crisis in the will have for the region.

Everything indicates that the scale of diplomatic relations between the and will increase, because unresolved conflicts still exist. In an infinity of subjects, asymmetry is evident.

Each of the three visions is different, though without a doubt has more in common with McCain than with Obama. However, the platforms of the three candidates have a common denominator: Washington should pay more attention to Latin American countries if it wishes to influence Latin America and receive support in the face of the diplomatic offensive forwarded by Venezuela and Brazil–two countries which, even if they are truly different, have as their goal the leadership of regional economic and political processes, opposing in greater or lesser measure the the policies and influence of the White House.