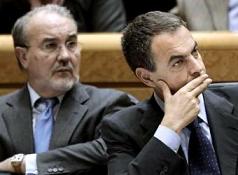 The entire world is searching for the magic prescription to save the Spanish miracle from ending in tears. One recent proposal in these pages could open a fertile debate. However, time flies and even the best plans won’t avert short-term suffering. Proposals can be formed, but the obstacles should not be ignored. Where some see the glass half full, I see it almost empty.

(From ) IT HAS BEEN TRULY EXASPERATING to note in the latest electoral campaign the sparse interest granted on the part of the candidates and campaign staff to the worrying horizons of the Spanish economy. It could be said that the country lives in the best of worlds and that no one dares to point out that which is coming. However, the developmentalist model of construction + consumption + immigration, invented by the Popular Party (PP) in order to end the crisis of the early nineties and incorporate into the European monetary system, has been used up, and no one has even hinted at an answer.

Joaquín Mirkin, the executive director of the Safe Democracy Foundation, with his habitual optimism, has presented in these pages a brilliant proposal [1], in which he suggests that the State foment and head a process which he refers to as the second transition, with the help of big business and the academic community, creating conditions from the top down which would considerably increase innovation and competitiveness in the country. “There are no valid clusters in a country where many of the seventeen autonomous governments have initiated a process of economic and social segregation” It is a mid- to long-term strategy for diversifying production, and in which does not depend solely on construction and consumption. It would be necessary to identify which sectors should be developed, highly valued sectors that require qualified labor. This would be a policy of clusters (nuclei of adjacent businesses and institutions which compete and cooperate) just as and had.

It is a proposal which would include concentrated investments and shared projects in R + D, reform in the university towards education better adapted to the market and more technical and specialized profiles, state-sponsored support for infrastructures to avoid the collapse of real estate groups, the creation of an integral think tank dedicated to emerging economies, and, last but not least, a europeanization of labor schedules.

DISINTEGRATION, A CONCEPT OF DEVELOPMENT AND QUALITY

“Developing this or that sector is not enough: a change must be made at the roots, to the point of no longer calling it development, but rather improvement or consolidation” But Mirkin does not ignore that all this has been talked about for years in Spain without putting it into practice; that all this was an objective of the first transition; that before the Israeli clusters existed there were the poles of development that transformed and modernized Spain in the sixties; that the diagnostics are many, the prescriptions are numerous, but the patient, out of pride, has refused to listen to the doctors.

First of all, as we must now play the part of pessimists, it should be said that there are no valid clusters in a quickly disintegrating country where many of the seventeen autonomous governments have begun a process of economic and social segregation. At these heights and in these times, a process of common solutions as well as centralized design and application, is impossible.

Second of all, the debate should return to the almost philosophical principles of a change in course. “Industrial seriousness has been cornered by the return of old national vices–inefficiency, odd jobs, bargains, scams, and breaches of contract” Developing this or that sector is not enough; a change must be made at the roots, to the point of no longer calling it development, but rather improvement or consolidation. For each point of gross domestic product (GDP) that has amassed in the last decade (having done so with the greatest velocity in world history) it has lost at least two points in natural and environmental richness, in the health of its ecosystems, and in social equilibrium. In few instances will there be clearer examples of how desarrollismo (developmentalism, a concept invented in to criticize those policies of growth during the last years of Franco’s government, which were later copied by the democratic transition governments) has sacrificed quality of life for rash consumerism, something which has been eradicated in for at least three decades.

As a third point, and especially when speaking of competitiveness, it is important to pay attention to the rapid deterioration in standards of quality, in the supremacy of excellence at the individual and collective level, and in the demands for good work and a good product. It is something more than technical rules and knowledge, this seriousness in industry which has been increasingly cornered by the return of old national vices like inefficiency, odd jobs, bargains, scams, and breaches of contract.

During the last legislature, time for planning and thinking was spent in measures of image and make-up. “The drastic change in employment will have adverse consequences for public finances: the public surplus will practically disappear in 2009” And now the big bad wolf is here. The Bank of Spain foresees that unemployment will rise next year from 9 to 9,8 percent of the active population, very close to the levels of 2004 (10.6 percent), but far from the 8 percent achieved less than three trimesters ago. The rate of job creation will grow, in fact, up to 1,1 percent next year, four tenths less than in 2008. That is to say, employment will hardly grow a third part of what it did in 2007, when the level of employment grew at a rate of 3 percent.

The drastic change in employment will have adverse consequences for public finance, to the point that, according to the Bank of Spain, the public surplus will practically disappear in 2009. That year will end with a surplus equal to 0,2 points of gross domestic product, when this year, according to predictions, will reach 1,2 percent of the GDP (in comparison with 2.2 percent in 2007). That means that the National Central Administration will be in the red again (just like the city councils and autonomous communities already are), although Social Security will continue with a certain surplus, even if it is less than that of recent years.

“Investment in construction will decline this year by 0.2 percent, though next year it will suffer a recession of -1,2 percent” As the Bank of Spain says, less employment and a slowdown in private consumption will translate to a moderation of public deposits, most of all keeping in mind that business profits (which in recent years have risen drastically) will decelerate, particularly with regards to profits linked to brick (real estate and construction). According to the Bank of Spain, it does not look as if public consumption (the famous investments in infrastructures and the unproductive manufacture of official positions) can straighten the situation out. Although it will be the component which grows the most in 2008 and 2009 (4,8 percent and 4,4 percent, respectively), anti-cyclical policies will will be insufficient to avoid the deterioration of economic activity in a more adverse international context.

In ’s case, the figures for brick will be especially negative, to the point where this sector (which represents close to 17 percent of the GDP) will be in recession during this year and the next. Investment in construction will decline this year by 0,2 percent, though next year it will suffer a recession of -1,2 percent.

Things will not go much better for investment in capital assets, which will suffer a truly spectacular slowdown. “The corollary to this situation cannot be anything other than a deceleration of economic growth much more abrupt than initially estimated” While it grew at rates upwards of 11 percent in 2007, this year and the next it will grow by 4,4 percent and 2,6 percent, respectively, lending an idea of the contraction of this component of the GDP which has been so key in the recent Spanish growth. All this, additionally, is in a context of clear slowdown in private consumption, which will only rise some 2,3 percent this year and 1,9 percent next year, practically half of the growth rate found hardly one year ago.

The corollary to this situation cannot be anything other than a deceleration of economic growth much more abrupt than initially estimated, as the Bank of Spain admits: it foresees a growth of 2,4 percent for this year and of 2,1 percent next year, which means a record low since the recession of ‘92 and ‘93. And all this, as the regulator states, is in the best case scenario, with the chances glimpsed generally being even worse.

ONLY A PROFOUND, SENSIBLE AND VALIANT CHANGE IN GENERAL ORIENTATION

Like in the early nineties? In those days, the Spanish economy accumulated four consecutive trimesters of drop-off in economic activity. 0,8 percent in the last trimester of 1992, -1,8 percent in the first and second trimesters of 1993, and -0,9 percent in the third. After that, the Spanish economy began to straighten out, though it was thanks to an adjustment that brought with it more than a million jobs and four devaluations of the peseta, which served to compensate for the accelerated loss of competitiveness which was manifested in a massive deficit in the balance of payments. In any case, it was less than the current one, and the Bank of Spain puts it at 10 percent of the GDP during this year and the next.

The risk is of a lower level of activity accompanied by an increase in prices. So states the Bank of Spain, especially of 2009, insofar as it is possible that tensions in the markets for petroleum and primary resources continue, and that these impact labor costs and internal prices. Less growth and more inflation, a highly flammable cocktail.

Also, the Bank of Spain does not discuss other problems, such as the foreseeable lull in tourism in response to the recession in the european states; a recently immigrated 10 percent of the population, still not integrated, pouring in as an unqualified and painstakingly trained labor force; a nonexistence of the individual and collective savings which could serve as a cushion against the larger union of european states; and, above all, a mentality unfortunately adjusted to waste and apathy. Only a profound, sensible, and valiant change in the general orientation of policies, the economy, and the society itself could avert the disaster towards which the Spanish transition is headed. We state it thus clearly to ease the confusion with which, doubtlessly, this analysis will be received.