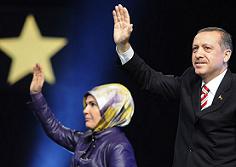 The Turkish lay establishment, represented by certain bureaucratic, judicial, military sectors is ready to recover in the courts what was lost in the ballot boxes, and has asked the court to close the AKP, the Islamic formation moderated in the government since 2002. A request that would have pernicious consequences for , assures the author.

THE EVENTUAL FUTURE OUTLAWING of the Party of Justice and Development [1] (AKP), the moderate Islamist group that has been in government since November 2002, only can be interpreted as an attempt at judicial coup. The secular establishment is represented by certain sectors of the bureaucracy, the judicial power and the Army. It has been accustomed to holding the power since the foundation of the Republic in 1923, and it is ready to recover in the courts what it has lost in the ballot boxes.

The Constitutional Tribunal decided this past March 31st to accept the demand of the State District Attorney, Abdurrahman Yalçinkaya, prohibiting the AKP and politically disqualifying 71 of their leaders for 5 years. This way, the prime minister, Recep Tayyip Erdogan [2], and the President of the Republic, Abdulá Gül [3], might find their positions in danger.

If the Court were to finally establish the close of the AKP, the consequences for would be pernicious.

“The Parliament group of the AKP should dissolve, but the Justice branch cannot avoid the reappearance of members again in the elections under a new party” Turkey would enter a power vacuum with a difficult solution and with multiple questions, among them the question of whether the Parliament would call legislative elections anticipated not even one year after one of each two citizens was put his or her faith in the AKP. In such a case, as the Turkish press has already speculated, Gül would continue as president until the end of his term, in 2014, for the impunity that his post grants him.

Also, the numerous disqualified deputies would save their seat until the end of the legislature and would be able to participate in the following elections as independent candidates. Meanwhile, the Parliamentary group of the AKP should be dissolved, but the Justice branch would not be able to avoid that its members (with the exception of the disqualified members of parliament) present themselves again in the elections under the acronym of a new party. In a situation like that, Erdogan might obtain a certificate of election independently and later be named as prime minister with the support of the predictable new Government post-AKP.

“Turkey would suffer a political and economic crisis that would paralyze the process of reforms initiated in order to join the EU” In this respect, one cannot forget that the bulging Parliament of the 2002 elections modified the law to allow Erdogan, disqualified for life, to recover public and political charges from 1998, was a deputy candidate and later chosen as Head of Government.

In this respect, it should not be forgotten that the Parliament elected in the 2002 elections modified the law in order to permit Erdogan, though disqualified for life for having occupied public and political positions since 1998, to be a candidate for Parliament and to be elected later as head of the Government.

THE ADHESION TO THE EU, (EVEN MORE) IN THE AIR

would suffer a political and economic crisis of incalculable proportions that would completely paralyze the reform process put in motion in order for to join the European Union. In fact, the commissioner for the extension, Olli Rehn [4], visiting , has warned that the outlawing of the AKP would endanger the entry of in the European Union.

There are those who speculate that the attempt of outlawing the AKP is nothing more than a maneuver by the lay establishment to derail the European dream once and for all, which is no paradox if we bear in mind that Mustafa Kemal Atatürk [5] preached the benefits that would result from Europe’s assimilation of . What is certain is that the military and bureaucratic sectors believe that adhesion implies a series of reforms susceptible to being placed in an unstable or disturbing element to the integrity and security of the State, as well as the fact that to materialize those reforms would suppose an unacceptable loss of privileges.

“The outlawing would aid in making more radical those sympathizing with the moderate Islamism preached by the AKP”For example: to guarantee religious freedom, like the E.U. requires of Ankara, might lead (according to the kemalistas) to the restoration of the sharia; to try to solve the Kurdish problem, conceding a certain measure of autonomy to the eastern provinces in this predominantly Kurdish country could feed secessionism; and to reduce the protagonism of the Army, submitting it to civil power, could leave it in the free hands of an Executive of the AKP and result in an Islamized Turkey.

RADICALIZATION IN THE COUNTRY: CEMETERY OF POLITICAL PARTIES

“26 formations have been outlawed; the Kurdish, Islamic and even environmental, but most affected have been the left-wing parties” It would not solve, but irritate and elongate, the serious existing gap between the lay and Islam. Likewise, it would aid in making more radical those sympathizing with the moderate Islamism preached by the AKP, and could even spur the fanatics to appear again.

The most dangerous antecedent that can be found was in May 2006, when a judge was assassinated for impeding the promotion of a professor who used a veil in her private life. In a recent AKP meeting, the congregated multitude asked that those who put Erdogan in power have their hands cut off.

“Eight of eleven judges of the Court were named by the previous president, Ahmet Necdet Sezer, fervent defender of the secularism” Equally, it would corroborate the already famous expression that this Eurasian country is a cemetery of political parties. In the republican history of , 26 formations have been outlawed by the Constitutional Tribunal, from Kurdish nationalists to Islamists and even environmentalists, though most affected have been the left-wing parties. At any rate, the majority have reinvented themselves to return under new acronyms.

Such is the case of the AKP–the product of a split in the Virtue Party (FP), inheritor in turn of the outlawed party from the 1998, the Party of the Well-Being (RP)–or of the Party of the Democratic Society (DTP, pro-Kurd), which might also be closed soon by the Constitutional Tribunal, given its alleged ties with the armed group, the Kurdistan Workers’ Party [6] (PKK).

A NUCLEUS OF ANTI-LAY ACTIVITIES

In his 162-page application, the State fiscal general argued that the AKP has changed into a nucleus of anti-lay activities and has acted against the Constitution. The general said all this in a veiled reference to the February approval by the Parliament of an amendment to the Magna Carta that authorized the use of the veil in universities.

The admission of the demand of Abdurrahman Yalçinkaya by the Constitutional Tribunal shows that the future closing of the AKP should not be ruled out, above all keeping in mind that eight of the eleven judges that compose the Court were named by the previous president of the Republic, Ahmet Necdet Sezer, a fervent defender of the secularism who vetoed a great quantity of laws and appointments proposed by the AKP.

With everything thus, the outlawing of Erdogan’s party might be delayed until the end of the year. Meanwhile, the AKP might in having Parliament approve a constitutional amendment to the articles 68 and 69 which would make more difficult the outlawing of political formations. In addition, the Government could summon a referendum from which it would become all the stronger because, presumably, it would win without any great effort.

The future months will be key in the history of , a country whose constant internal disputes have long kept us on tenterhooks.