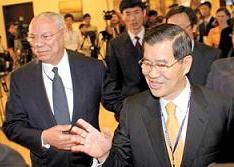 Is the relationship between and changing? The last official economic meeting between the respective authorities removed the hypothesis of the conflict. However, even intensifying the economic changes, the unification has not been considered, and not only because of ’s objections: such a geopolitical change in the zone would question the influence of in the region.

(From ) A HISTORICAL MEETING occurred between Vincent Siew, future vice-president of , and the president Hu Jintao, at the economic forum in Boao, April 12th, ‘s island. The meeting has motivated bilateral relations across the Strait after the legislative and presidential elections celebrated in last January and March, and it also served to re-launch the process of dialogue across the Strait that was interrupted in 1996. The president at the time, Lee Teng-hui, protested from that the relations between the Popular Republic China and the Republic of China must be formulated in terms of State to State.

“At the end of the month a Taiwanese delegation will visit the continent, without even waiting till May 20th. There is no time to lose”

The new team led by Ma Ying-jeou [1] will take control May 20th, but the Beijing-Taipei-Washington triangle is at a full boil. Siew, present in Boao, is the President of Foundation for a Common Market between and . Siew obtained from Hu Jintao the support to carry out direct charter flights during weekends starting next July, opening to Chinese tourists upon eliminating the existing restrictions and facilitating the change of currency.

Within a few days, a Taiwanese delegation will visit the continent, without waiting until the 20th of May. There is no time to lose. Even the mayor of , Chen Chu, of the opposing PDP (Democratic Progress Party), has been open to visiting the continent to manage the tourist and economic interests of his city.

THE MISTRUST OF THE PDP

“ has greeted the meeting with the diplomatic committee that would be necessary to wait, it qualifying of ‘good news’”

The constructive character of the bilateral dialogue, in process since 2005, between the Communist party of (CPC [2]) and the Kuomintang (KMT [3]), will now receive greatly important institutional support. For the DPP [4]of the President Chen Shui-bian [5], neither Boao’s meeting (in which Siew has participated since 2003), to judge the situation in Tibet as of mid-March, nor the dialogue nor the peace agreement that Ma wants to sign with Beijing will be able to generate even the most miniscule illusion among the Taiwanese population.

The fact that Siew was agreeing to sit down next to the representatives of Hong Kong and Macao, or the utilization of a travel document for the Taiwan compatriots to be present at the meeting instead of a passport, were considered evil omens. In addition, it is important to find out ’s attitude about candidacy in the World Health Organization (WHO [6]), presented under the name of and which will be debated next May. Another question is the level of representation for that will accept in the next APEC [7] (Asia-Pacific Economic Cooperation, Economic Cooperation Asia – ) summit.

In , (which, like , Ma wishes to visit before taking possession) the meeting was received with the expected diplomatic courtesy (the former secretary of State, Colin Powell, also was present in Boao), qualifying it as good news indicating the beginning of a new phase in the relations among both parties.

“ will try to reduce the influence of the in , and gain ground in litigation so it could be solved without external meddling”

After the meeting of Boao, Ma announced that as soon as he takes possession he will propitiate the restart of the contacts among the Association for the Relations across the Strait (continental) and the Foundation for the Exchange across the Strait (of the island). These para-officials entities were created in the nineties to manage bilateral relations in order to take advantage of the favorable atmosphere between both parts and resume the dialogue on eminently practical bases.

Chiang Pin-Kung, one of the heavyweights of the KMT and a key character in the resumption of the contacts with the PCCh in 2005, will be in charge of the Taiwanese foundation.

The rhythm and content of this dialogue, like ’s monitoring of President Ma’s margin for maneuver, add an important geopolitical charge to this new stage. will try to reduce the influence of the in , and gain ground in the internal matter of the litigation so that the problem can be solved among the Chinese on both sides of the Strait, without external meddling.

“The security of the commercial routes of the Asia-Pacific, as well as the U.S. Navy’s control in a strategically vital zone, is at stake”

The new setting removes the hypothesis of an open conflict (already speculated is the removal of at least half of the continental missiles pointed at the island, as a first gesture of goodwill) and opens the way for the thesis of the progressive absorption of Taiwan, the managerial class having been seduced by the economic opportunities of the continent.

That major bonding could create tensions with the , though tensions very different from those provoked by the calls for sovereignty by Chen Shui-bian, which would be difficultly materialized by ’s opposition. Apart from business, at stake is the security of the commercial routes of the Asia-Pacific, as well as the U.S. Navy’s control in a strategically vital zone.

With this backdrop, even though economic exchanges are intensified, a lot will have to change before the unification is able to get off the ground. It would entail a geopolitical change in the zone of such magnitude that ’s influence in the region, as well as its predominant role in the world’s oceans, would be put in check.