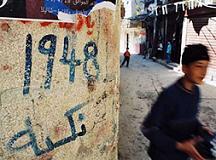 What initially emerged as a regional conflict between Israelis and Palestinians has now achieved status as a dispute of global proportions and repercussions, though after decades the driving faults behind it remain dismally unchanged. While the Palestinian nationalist movement faces the task of mending various historical defects, both sides of the conflict must now confront the responsibility of working towards a status as constructive partners, says the author.

(From ) IN MID MAY, with much fanfare celebrated its 60th anniversary. While most Israeli Jews happily relished the event, Palestinian Israelis and those Palestinians living beyond, despondently looked on as they have on every anniversary, recalling the Nakba [1] (their 1948 catastrophe) sadly and sulking in despair and despondency.

Yet not many of the Arab population gave much thought to the question of whether history could have evolved differently, the history of the Palestinians facing a Zionism in which they should be regarded as victims or losers in this nearly generation-long confrontation.

Moving into the 21st century, live memories of the days leading to the establishment of inevitably recede and erstwhile fresh events turn into history. Israelis are told and taught of the valour of the young soldiers who early in 1948, recently recruited to the Israeli Defence Forces, successfully neutralized the Palestinian guerrillas across the country, ensured that the siege over Jewish Jerusalem be lifted and then persevered and fought back the Egyptian, Jordanian, Syrian, Iraqi and Lebanese troops that on May 15th together invaded the one-day-old nation.

THE IMPORTANCE OF INSTITUTIONS

Few among the Israelis or their allies overseas spend time to appreciate the fact that on Sunday morning, May 16th, taxes were collected, schools were open for children, hospitals and medical services were provided, that indeed the government and municipal institutions were open for business. “In all the years following the British occupation the Palestinians never showed any interest in setting up similar such institutions” The organization that enabled this to happen was launched in 1919, close to thirty years before the declaration of the Israeli sate, when in the aftermath of World War I, young immigrants, many from Western Europe and the UK, arrived in Palestine and took up employment as staff of the Zionist Organization (later to become the Jewish Agency [2]), while others joined the British Mandatory Government, filling positions which eventually would evolve to become Israeli Government offices. So, when the UN voted for the establishment of the States of Israel and , and the British Government announced that it would end the Mandate on May 15, the budding Israeli state bureaucracy was there, ready to carry out Governmental services.

In all the years following the British occupation, and unlike the Jewish Yishuv [3], the Palestinians never showed any interest in setting up similar such institutions. Bitter about the Balfour Declaration [4], worried by the perceived to be threat brought about by Jewish immigration and the evident growth of the neighbouring Jewish population, it failed to create a political establishment of its own. The emerging nationalist Palestinian movements lacked organization, consensus, purpose and solidarity. Largely influenced by those who regarded themselves as their leaders, from the beginning, they refused to consider setting up a state of their own and when the UN partition plan of 1947 was approved, they did not change their policy and thus their independence remained an unreachable target. “There has been no serious Palestinian attempt to establish a political movement that would undertake a structuring of the essential pillars of civil government” They erred from the start, when they refused to organize themselves or even begin planning for a state of their own. So it was before 1948 and again with their failure (never even seriously attempted) to form an effective working administration in the aftermath of the 1993 Oslo Accord. [5]

In spite of the impressive number of well trained Palestinian professionals, academic scholars and well educated middle class, there has been no serious Palestinian attempt, all these years, to establish a political movement that would undertake a structuring of the essential pillars of civil government, a mode of self-rule that not least would strive to reduce the misery of such large sections of their own indigenous people.

In the Ha’aretz [6] of May 9th, Hebrew University’s Professor Shlomo Avineri wrote of the historical failure in the inability of the Palestinian national movement to create the political and social institutional framework that is the necessary foundation for nation-building, and then added that national consciousness, strong as it may be, is not enough: movements that could not create the institutional system vital for their success, failed. And indeed, over these years there has been no Palestinian attempt to establish the necessary institutions and basic infrastructure. Not surprisingly, without it, all their negotiations or even contacts with Israelis have been ineffective.

LOOKING TO THE FUTURE

Time has not served the Palestinians well. It would be far better if, without erasing their defeats from the past, they begin to think and plan for the future, one in which they shall share in the role of constructive partners. To launch such a change in approach, it will be essential for them to set up for themselves the institutions essential for self-government.

“As time evolved, the negative posture of the Palestinians has proved to be a powerfully negative weapon” In resolving the generations’ long conflict, there will be a need for a pragmatic, reasonable leadership, and capable to represent their interests, which so far has been absent. It would be their assignment to handle questions as to what kind of a state could be established, what might be reasonable reparations for their economic losses over the years, and how to approach the sensitive matters related to the refugees’ right to return or to claim alternative compensation.

It is an error to believe that has benefited from the weaknesses of the Palestinians as described. In failing to address the causes and seek the solutions, the conflict which was local in 1948, has over the years, mushroomed to global proportions. As time evolved, the negative posture of the Palestinians has proved to be a powerfully negative weapon. It was not generally realized that from what was a local, minor, and almost tribal struggle in the early years of last century, it has become an ominous factor in the escalating racial confrontation between the Moslem world and the West, the global Jihad.

“Israel should understand that it cannot abdicate its responsibility, as ruler both over its own Palestinian minority, and those occupied living in the West Bank, who come under military government” Israel preferred not to be involved in the shortcomings of the leaderless Palestinian society, and never showed compassion or offered help to ameliorate the abject, sordid conditions of the multitudes living in the refugee camps of the Gaza Strip, Lebanon and the Israeli-occupied West Bank. It paid scant attention to the fact that these have become a symbol and a benchmark to the radical Arabs and Moslems that in turn have and continue to contribute to the global escalation. Al Qaeda would exist without the plight of the Palestinians, but in reminding their potential followers of the dismal conditions of the refugees for which they blame and its support from the , it is recruiting more support from the Moslem world.

should understand that it cannot abdicate its responsibility, as ruler both over its own Palestinian minority, composing some 20 percent of the population, and those occupied living in the , who come under military government. It must comprehend that making peace is possible and a far greater priority than held so far. In seeking peace with its neighbours, the time has come for it to define what should be the reasonable borders. And it should take far more positive steps to encourage, indeed entice, the more enlightened segments of the Palestinians to become more active in the quest for cooperation and a reasonable and acceptable settlement to all.

All those who hope for peace, pray this will commence soon.