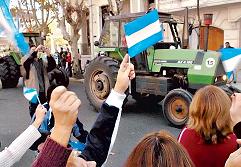 After more than three months of agitated mobilization of the Argentine agricultural sector, which has risen against the agrarian and economic policies of Cristina Fernández de Kirchner’s government, the possibility should not be discarded that the people of the countryside could shape the territorial base of upcoming projects and political realignments, the author says. The agricultural sector has a voice and a vote.

(From Buenos Aires) ONE OF THE UNSUSPECTED SOURCES of conflict between the Government and pro-rural entities in Argentina is the appearance of a nationwide opposition oriented around a specific productive sector; and one in which an important part of the recent economic growth has its base.

“When the president criticized what she called protesting abundance, various sectors of the interior and urban middle class felt they had been alluded to in a derogatory way”

The government’s decision to increase the percentage of retentions in the export of soy and grains started as a sectorial and corporate lure, though following two agricultural strikes complete with roadblocks throughout the country and protests in Buenos Aires, it turned into an epicenter for contention between the government and a sector of society, breaking possible political realignments.

What stands out in this case is the fact that this new opposing front was not the result of a deliberate and conscious goal of ruralist leaders or of the political opposition, but rather the way in which the government and president Cristina Kirchner handled the situation from the start. From the moment the president loudly criticized what she called protesting abundance, various sectors of the interior and urban middle class felt they had been alluded to in a derogatory way. Even if there had never been a warm sympathy with Kirchner’s administration, this division, as well as a certain disgust with the government’s attitudes, was now set.

Meanwhile, in the last three months, service stations at intersections have been transformed into meeting points for rural producers. There have been improvised gatherings dedicated to feverish exchanges and meetings, as well as informal assemblies between agricultural directors and organizations and medium-sized producers and farmers, together with live television cameras.

Amid heating confrontations, this new broth has been simmering, and from it could emerge a retaliatory movement with various offshoots. During a rally a few days ago in Gualeguaychú, the same border city where two years ago environmentalists destroyed a bridge in protest of a paper mill located in the neighbouring Fray Bentos in Uruguay, Eduardo Buzzi, the president of the Agrarian Federation, judged the protest to be a great national movement and asked national authorities to discuss a different kind of country.

An article published in the The Nation [1] by a spokesman for one of the movement’s sects shows the spirit of the conflict, as well as the images and ideological representations it has unleashed. The end result has been a sociological phenomenon worth paying attention to.

THE GESTATION OF A CRISIS

The Author, Malena Gainza, explains: Argentina is a country in which France, Spain, Italy, Germany, the UK, Portugal, Switzerland, Holland, Denmark, Belgium and Poland could all fit with room to spare. “Out of irresponsible hospitality, the bovine oligarchy failed to plan the infrastructure necessary to accommodate a tripling of the national population” Our population, heaped up in a handful of cities, is not even 10% of that of the total of those other cities. Here, therefore, is an immense and unpopulated territory with exceptional climate and soil, with efficient agricultural producers and agroindustrial complex, which offers infinite possibilities for growth, for work and for the well-being of the population. Whether we like it or not, we are an agricultural nation par excellence.

Continuing, we can revisit the Golden Age of agro-exportation in the Argentina of a century ago, during the oligarchy of the 80’s: Throughout our history, we have committed the unpardonable blunder of not demanding of every government the permanent incorporation of (experienced) ministers of economy in the agricultural sector. (. . .) Out of ingratitude, the governing sector that founded the country was baptized as the “bovine oligarchy”. Between the end of the 19th century and the beginning of the 20th, this same group, without any conditioning factors, took in more than three million European and Eastern refugees who fled the terror of the war in their countries. However, out of an irresponsible hospitality so characteristic of the criollo, the mentioned oligarchy failed to plan the infrastructure necessary to accommodate a tripling of the national population. Generous or abusive, according to how you look at it, it paid the political price of its laziness and lost power.

In this vision, the arrival of democracy from the hand of an expropriating pro-state movement was what started the decadence: The inheritance law decimated individual-title land extensions. “It is, neither more nor less, the return of federalism against the centralism of Buenos Aires” The direct and indirect negative burden of this is such that (even before the increase in soy retentions) the farmer who fails to work the land efficiently, loses it. Now, this social player is seeing a vindication reemerging with a combination of traditionalism, innovation, technological progressivism, and political conservatism: Today hundreds of thousands of large and medium-sized producers define Argentine agriculture. Invisible to those in Buenos Aires, ignored by politicians seeking the vote in large urban areas, and far from the centers of power, they work anonymously from day to day. They are the backbone that supports the country’s interior, quietly offering up food, labor, and currency for everyone. They deserve greater respect and thanks from the people and the government, not insults and mistreatment.

THE CULTIVATION OF SOY… AND OF RESIGNATION

It is, neither more nor less, the return of federalism in reaction to the centralism of Buenos Aires. “In addition to Soy, they cultivate patience and resignation in order to survive the certainty that following years of fat cows will be years of thin ones” Without their contribution, neither industry, nor commerce, nor services would exist. They are the base of the agroindustrial chain, which is the most efficient sector in the Argentine economy. But every chain is only as strong as its weakest link, and the rural sector’s unlimited production does not control its own timetable. It works according to the implacable rhythms imposed by nature, the rigorous dates of planting and threshing, and other urgencies that determine the life or death of crops and animals. On top of that is added the difficulty of negotiation, made worse by lack of communication with peers and with society at large due to enormous physical distances, deficient roads, and precarious means of communication.

Solidarity is idiosyncrasies of the rural people, who are austere, humble, and respectful of nature. In addition to soy, they cultivate patience, resignation, and obsession with their work in order to survive the frustrating certainty that following the years of fat cows will be years of thin ones, regardless of their efforts and outside of their control (due to low prices, plagues, droughts, floods).

But the Argentine State took advantage of the proverbial rural meekness in order to progressively carry off, without regarding the producer, more than 50 percent of profits, without running the smallest risk, and without even giving compensation to those legally obligated to pay taxes and other unscrupulous fees created by a covetous State that charges for services it doesn’t even provide.

IT ISN’T ONLY ABOUT FIGHTING OVER SOYBEAN PRICES, MS. PRESIDENT

The analysis we reproduce here ends with a call for opposition, an appeal to a federalism able to stand firm against the central powers and to employ participatory resources and protest to their fullest extent. “Satellite television, digital telephones, and the Internet have shown them that protest is the only language that the Kirchners’ administrations understand”After ruining the livestock and grain business with maximum prices and the close of exportation, the State now wants to keep for itself 44 percent of the soy crop. But the rural sector has said “enough”. Enough with the exploitation, with the disregard of its people and their efforts. Enough with false inflation rates, false subsidies, false exchange rates, untended roads that ruin cars and trucks, the nonsense of a bullet train when cargo trains are needed, hospitals without funds, and destitute schools. It is not only about soybean prices, Ms. President.

No one knows better than the rural people what it takes to produce food and how much it hurts to watch it disappear. They saw their cows and crops die during droughts and floods and threw out a fortune in milk and grain just to pull cars and trucks out of the miserable roads where they had gotten stuck. In the cities no one realized, or cared. “With globalization, the distant rural horizon came right into the city, and the country folk dismounted in the Casa Rosada” Stoically, they put up with the distant strikes for years because the rural sector itself never went on strike. However, satellite television, digital telephones, and the Internet showed them that protest is the only language that the Kirchners’ administrations understand.

With globalization, the distant rural horizon has descended on the city, and the country folk have dismounted in the Casa Rosada. The rural sector gained more coverage in the media, and is on the air. Now it tames fiber optic cables, mounts cyberspace, chats around virtual campfires, reads internet newspapers, visits the cybercafé before the general store, and trusts email chains more than messengers. Today’s gaucho carries GPS in his saddlebags and a cell phone under his poncho. The rural Argentine people finally understand Sarmiento’s insistence on educating the people and teaching them their rights. Today, in addition to the vote, they have a voice.

Could a ruralist party like those that exist in various other countries be born in Argentina? Could it be a substitute for the separationism found in Bolivia’s Santa Cruz de la Sierra, another consequence of the pulverization of the old Argentine system in which Peronists and radicals brought together multi-sectorial and multi-class interests from different social sectors? That doesn’t seem to be the case, but Cristina Kirchner’s government has found itself facing an opposing front of unexpected reach, and one for which her administration is in large part responsible for having created.

Although the movement was originally underestimated by the government, the possibility cannot be ruled out that those sectors tied to agricultural production which have mobilized in recent months could end up being the territorial base of new projects and political alignments. Playing with metaphors, we could call it a latent seedbed.