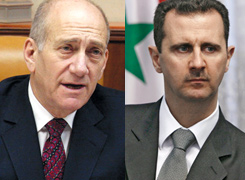 The big question is whether an agreement can actually be reached between Israel and Syria that does simply return Golan Heights to Damascus, but that brings peace in the true sense of the word. With Iran in the background, and with its alliance with Syria, peace is difficult to fathom, says the author.

(From Jerusalem) THE ANNOUNCEMENT MADE ON WEDNESDAY, MAY 21st, about the reinitiation of peace talks (at the moment indirectly, with Turkey mediating) between Israel and Syria ended an eight-year stagnation that began with the termination of communication in 2000. However, it is not yet clear that this will really end problems.

The agenda is much more complex than what is reflected in international media reports, which often give the impression that everything boils down to an Israeli withdrawal from Golan Heights. Certainly, this is one of Syria’s demands, but the overall agenda is not so singular in focus.

But the greatest shadow in the background is Iran’s continued support for all efforts to destabilize the Middle East. Iran’s influence is key, and therefore constitutes the main obstacle to the achievement of peace in the area.

THE HEADQUARTERS IN DAMASCUS

The first point directly affects the Israeli-Palestinian sphere. The primary radical terrorist organizations –including Hamas and Islamic Jihad– are based in Damascus. It was there where they started to operate under the so called Rejection Front when, a decade and a half ago, peace talks between Israel and the PLO were started.

The extremists, from the beginning indiscriminately opposed to the peace process, always found protection in Damascus. This, argues Israel, must stop.

But Tehran will presumably continue to support the financing and arming of many of these groups.

Syria is also a key element in the functioning of the radical Lebanese organization Hezbollah, an ally of Iran. While Hezbollah has its own agenda and can hardly be seen as anyone’s puppet, it is clear that its interests (as an Islamic fundamentalist movement) almost always coincide with those of Iran, which uses it as a proxy in the Lebanese mosaic.

“United Nations reports clearly indicate that arms from Iran and Syria arrive in the hands of Hezbollah and thereby shake the fragile regional stability” Regular shipments of arms sent from Iran have for years landed at the airport in Damascus and from there been sent to the Beqa, the Valley of Lebanon, into the hands of Hezbollah. The Shiite organization has also received shipments directly to Lebanon.

United Nations reports clearly indicate that arms from Iran and Syria arrive in the hands of Hezbollah and thereby shake the fragile regional stability achieved with the resolution 1701, which ended the war between Israel and Hezbollah in August of 2006.

Already, in June 2007, less than a year after that war, UN Secretary General Ban Ki-moon urged Syria and Iran in an official report to stop the transfer of antitank and antiaircraft missiles to Hezbollah through the Syrian-Lebanese border.

On more than one occasion, Hezbollah itself has declared that it already has many more missiles than it had when the war began on July 12, 2006. These missiles are not being manufactured by Hezbollah itself, but are arriving through Damascus y Tehran. According to Israeli intelligence sources, it was estimated a year ago that Hezbollah had accumulated more than 20,000 missiles. At the outbreak of the war in July 2006, Hezbollah already had 12,000.

A side commentary about the issue of Hezbollah’s weapons… In this analysis, the relevant framework is Israel’s consideration of these weapons as a new threat. However, recent events in Lebanese territory have made it clear, contrary to what some have insisted, that Hezbollah’s arms are not solely reserved for Israel. When it has served their interests, Hezbollah has used its weapons against the people of Lebanon. Syria has supported them in this as well. It is as if Syria cannot accept the idea of not being in control of Lebanon. Syria continues to try to pull Lebanon’s strings in any way possible.

THE ALLIANCE WITH IRAN

The link between Syria and Iran has not occurred by chance. The countries have coinciding interests with regard to destabilizing the region through terrorism and with regard to supplying arms to Hezbollah. Under the surface lies a strategic pact between countries, which symbolically became a military agreement on mutual defense just as indirect talks between Israel and Syria had begun in Turkey.

“It is difficult to imagine now that Syria is really interested in peace with Israel. It is hard to imagine Israelis visiting Damascus or that Syria would send their writers to literary seminars in Jerusalem or Tel Aviv”

A few days after the announcement of the resumption of Israeli-Syrian dialogue, the official Iranian news agency (IRNA) reported that Syrian Defense Minister Hassan Turkmani arrived in Tehran for an official visit after being invited by Mostafa Mohommed Naijan. The purpose of the visit was to follow up on the joint-defence agreements–to find a way to strengthen the ties of defense and maintain talks on recent regional events, said the statement.

These regional events included negotiations between Israel and Syria, which President Mahmoud Ahmadinejad of Iran had already reacted to by saying that they had caused him great displeasure. Whether these negotiations really did cause anyone to be surprised is not important.

The Revolutionary Guard of Iran, whose chief also met with Syrian Minister Turkmani, discussed how to react. In Iranian terms, this could naturally be interpreted as when and where to attack.

This is precisely what Israel wants to prevent through a peace agreement with Syria, believing that if they can secure a signature it would serve to distance Damascus from the axis of evil.

IT IS NOT SO SIMPLE

It is difficult to imagine now that Syria is really interested in peace with Israel. It is hard to imagine Israelis visiting Damascus or that Syria would send their writers to literary seminars in Jerusalem or Tel Aviv. The Syrian interest at the moment is mostly that it be regarded as a participant in a negotiation process so that its efforts may be seen as at least somewhat legitimate to the United States. Actually achieving an agreement is a whole different story.

But the big question is whether the two countries will be able to reach an agreement that does not simply return Golan Heights to Syria, but that brings a real peace to the region.

A signed piece of paper is one thing. Experiencing true peace is something entirely different. With Iran in the background with an alliance with Syria, this is difficult to imagine.

The alliance between Syria and Iran is approaching thirty years in age, and contrary to the opinions of some analysts, it was not the created in response to the government of Saddam Hussein in Iraq. According to analyst David Schenker, in a study published by the Institute for Contemporary Affairs in Jerusalem, even before the Islamic revolution in Iran, the then Syrian president Hafez al-Assad –father of the current president Bashar– offered asylum to Ayatollah Khomeiny in Syrian territory. When the Shiite regime came to power in Tehran, Syria was the first Arab country to officially recognize it.

Today Syria is the only Arab country that maintains a close relationship with Tehran. Despite the isolation that this causes in the Arab world, Syria continues with this policy, making it difficult to imagine that it would leave this alliance for peace with Israel.

Today the relationship between Iran and Syria is much stronger than when it began. Iran has given Syria financial aid and technology for both conventional and unconventional military programs, but the aid is not limited to this. Iran seeks to be present in its assistance to Syria in as many ways as possible to ensure the difficulty of a future breakdown of the alliance.

Schenker, the previously mentioned researcher, noted in his study that according to Syrian sources –and realizing that acquiring reliable information can be problematic in Syria because of its secretive nature– Iran has invested about 1,500 million dollars in Syria thus far. Among the largest projects are two automobile factories that are a Syrian-Iranian joint venture, an agreement for a refinery to be built by Iran, Venezuela and Malaysia, and talk of building a cement factory in the Iranian city of Hama.

According to some analysts cited in the study, Iran’s investment in Syria amounts to around 10 per cent of all of its foreign investments.

It is certainly legitimate for two states on different levels to cooperate and develop relationships. The problem is when there are other influences in the background which are not used for normal exchanges but rather as a lever to accomplish political ambitions and extremist religious ideologies through violence.

AND NOW FOR GOLAN HEIGHTS…

Discussion on the topic cannot be limited to the fact that Israel conquered the Golan Heights area in a war, and therefore must return it.

Golan Heights was a Jewish territory centuries ago, as King Solomon appointed three ministers to the region and there are still ruins of old synagogues there. But despite its historical background, Golan Heights was awarded to Israel as a territory in the resolution 181 of the UN General Assembly on November 9, 1947, which also approved the partition of Palestine into one Arab and one Jewish state. “For Syria, seeing Golan Heights in the hands of Israel is an attack on national pride”

Israel does not deny that Golan Heights was inside the political border of Syria. However, the problem surrounding the debate over the future of this area is that Israelis remember how Syria used this area when it was in their possession – taking advantage of the topographical height advantage to constantly bombard Israeli settlements in the valley below.

When Golan Heights was conquered by Israel on the Syrian front on June 9th & 10th of 1967, the government made clear that it had made its decision in this regard, Jewish settlements in the area could no longer handle the pressure of the Syrian threat. A delegation from the 31 villages of Upper Galilee came to meet the cabinet of Premier Levi Eshkol and the head of the regional council, Yaakov Eshkoli, who stated: if we do not remove the Syrian threat, we will have to abandon our homes in Kibutzim and then we will be pursued by the people of the city of Kiriat Shmona.

For Syria, seeing Golan Heights in the hands of Israel is an attack on national pride. It will not accept any kind of agreement with Israel until it has recovered what it considers to be its own.

The big question is what kind of guarantee Israel will have that Golan Heights, if returned, will not once again become a base for attacks like it was in the 6 days war. With today’s insecure times, the area could possibly become a means for Iran to exert control over Israel from above.