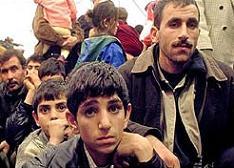 A tacit and politically correct agreement between parties, media, and institutions in Italy previously prohibited the association of the word delinquent with any concrete nationality. This pact has been broken by the immigration policy of Silvio Berlusconi’s new government, the risk of which, the author says, lies in the use of simplified formulas of communication that center all public attention in fear of the others and the illusion that their expulsion will solve the problem.

(From Madrid) LATELY THERE HAS BEEN MUCH TALK about the interventions that the new government of Berlusconi wants to take with regards to responsibility for the security of Italian citizens, mainly focusing on the fight against illegal immigration and on the naturalization of immigrants from Eastern Europe.

The Berlusconi government is planning measures through an immediately effective executive order and a bill that would have to be approved by the parliament and would need time to be executed.

“The only legal immigrants would be those who obtain work contracts before leaving their country of origin” The executive order has emerged primarily as a novelty reserved for mayors, who can take on cases they deem exceptionally salient, decisions such as evicting nomad camps, and who can decide on immigration issues in a discretional manner.

Within the bill there are three great innovations that can be highlighted: the introduction of illegal immigration as a crime punishable by prison sentence (from six months’ to two years’ imprisonment); the possibility of detaining immigrants in detention centers for eighteen months to carry out identification checks before deportation; and the increase in difficulty for families to obtain permits, requiring DNA tests in order to qualify for Italian citizenship and implementing a mandatory two-year waiting period between marriage and qualification for citizenship.

“The cities do not feel safe and the public often places the blame on uncontrolled immigration” The only legal immigrants, therefore, would be those who obtain work contracts before leaving their country of origin.

The bill also intends to limit the possibilities of residence for immigrant communities, which will have to demonstrate the availability of an income sufficient for living costs and health insurance. This measure was conceived, above all, in reference to immigrants from Eastern Europe.

According to several polls, these measures have come in response to a major concern of Italian citizens: security. The cities do not feel safe and the public often places the blame on uncontrolled immigration. “Much of the national election campaign and the mayoral campaign of Rome have been centered on the issue of security, often associated with the issue of immigration”

After the rape and murder of Giovanna Reggiani in Rome by a Romanian, recent media attention has insisted on the troubles and violations committed by immigrants. It has not been so much about sexual violence in general, but the violence of immigrants.

Indeed, much of the national election campaign and the mayoral campaign of Rome have been centered on the issue of security, often associated with the issue of immigration. In the end, the winner was the one who proposed to face the question with the greatest harshness.

The Government is receiving criticism for the planned solutions in the fight against immigration and for the force of the proposals made to guarantee the security of its citizens. “The challenge is to bring about a common consensus and a trust in the actions of the government” What stands out most is the emphasis on the speed and determination with which the issue of security is going to be confronted, and on the use of the binomial, immigrant-danger. As for speed, the Government insists that what it wants is to decisively respond to the fears of Italians… thereby risking being too hurried and reflecting little.

It is apparent that their action plan is based on a short-term strategy, the immediate resolution of the problem. This involves strategic communication which emphasizes the speed of decisions and the immediate effects of the measures.

Naturally, the challenge is to bring about a common consensus and a trust in the actions of the government, despite their lack in foresight and seeming recklessness.

This is in order to draw attention to public opinion through effective communication. However, it is possible that this measure may really do nothing to really reduce the danger in the cities, which need to be reorganized and reflected upon in order to see real change.

AND WHAT IS POLITICALLY CORRECT?

What worries many critics of these measures is the loss of political correctness: until recently, a tacit agreement between parties, journalists, and public institutions prohibited the word delinquent with relation to only one nationality, as well as similar stereotypes.

“Now the entire center-right government is in agreement with regards to these issues” Now this fence, tacit and shared, has disappeared. Even the government has defied it, validating the acceptability of this behavior. Several attacks have already been made on immigrants and nomad camps, and several shops belonging to immigrants have been robbed. Groups of citizens responsible for monitoring areas of cities so as to prevent crimes have had to start making rounds, thus demonstrating the weakness of police forces.

In Italy there was not, as occurs in many parts of Europe, a party that bases its political line solely on immigration. Even the Northern League, which is hard on immigrants, was more focused on issues like fiscal federalism. Now the entire center-right government is in agreement with regards to these issues.

THE DANGER OF THE ITALIAN TAKE ON IMMIGRATION

After complaints and criticism from some MEPs in the EU, it is difficult to know what measures the Government may take, although it seems determined to take them all.

Objections to Italy’s immigration policies come from across Europe, although all European countries deal with immigration, and do so from the perspective of repression and restrictions on the possibility of obtaining residence.

Many of the countries of the EU have more security checks at their borders through agreements with the Maghreb countries, as well as with other states.

The danger of Italian immigration policy is that there is no hesitation in using simple forms of communication, seeking consensus in a crude ways by focusing all the citizens’ attention on a single concept: fear. Fear of the outsiders and the illusion that their expulsion will remove the problem.